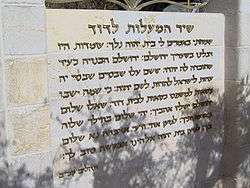 One of the Songs of Ascents, Psalm 122 appears in Hebrew and English on the walls at the entrance to the City of David, Jerusalem, Israel.

Song of Ascents is a title given to fifteen of the Psalms, 120–134 (119–133 in the Septuagint and the Vulgate), each starting with the ascription Shir Hama'aloth (Hebrew: שִׁיר המַעֲלוֹת‎‎, meaning "Song of the Ascents"). They are also variously called Gradual Psalms, Songs of Degrees, Songs of Steps or Pilgrim Songs.

Many scholars believe the title indicates that these psalms were sung by worshippers as they ascended the road to Jerusalem to attend the three pilgrim festivals [1] (Deuteronomy 16:16). Others think they were sung by the Levite singers as they ascended the fifteen steps to minister at the Temple in Jerusalem.[2] One view says the Levites first sang the Songs at the dedication of Solomon's temple during the night of the fifteenth of Tishri 959 BCE.[3] Another study suggests that they were composed for a celebration after Nehemiah's rebuilding of Jerusalem's walls in 445 BC.[4] Others consider that they may originally have been individual poems which were later collected together and given the title linking them to pilgrimage after the Babylonian captivity.[1]

They were well suited for being sung by their poetic form and the sentiments they express. "They are characterized by brevity, by a key-word, by epanaphora [i.e., repetition], and by their epigrammatic style.... More than half of them are cheerful, and all of them hopeful."[5] As a collection, they contain a number of repeated formulaic phrases, as well as an emphasis on Zion.[6]

There are two references to the Songs of Ascents in the Mishnah, noting the correspondence between the fifteen songs and the temple's fifteen steps between the Israelite's court and the women's court.[7] Rashi refers to a Talmudic legend that King David composed or sang the fifteen songs to calm rising waters at the foundation of the temple.[8]

It is traditional to say Psalms 126:1-6, 145:21, 115:18, 118:1, and 106:2 [9] before one begins the Birkat Hamazon on the Sabbath Day and on Jewish Holidays Various tunes have been written for this psalm, the most famous by the cantor Pinkhas Minkowski, but had been attributed to his cousin the famous cantor Yossle Rosenblatt who sang it for the end movie about Jerusalem and Zionism that he was making in 1933, and who had died just before publishing it.

It is also traditional for some Jews to place a copy of Psalm 121 in the labor and delivery room to promote an easy labor by asking God for mercy. As well, it is placed on the baby's carriage and in the baby's room to protect the child and surround them in learning and with holy objects.[10][11]

The liturgical use of these psalms came into Christianity through its Jewish roots. The form of the Scriptures used in the Early Church, at least so far as the Hebrew Bible was concerned, was primarily the Septuagint. In the Septuagint, these psalms are numbered 119–133.

Many early hermits observed the practice of reciting the entire Psalter daily, coenobitic communities would chant the entire Psalter through in a week, so these psalms would be said on a regular basis, during the course of the Canonical hours.

In the Eastern Orthodox Church and those Eastern Catholic Churches which follow the Byzantine Rite, the Songs of Degrees (Greek: anabathmoi) make up the Eighteenth Kathisma (division of the Psalter), and are read on Friday evenings at Vespers throughout the liturgical year. The Kathisma is divided into three sections (called stases) of five psalms each.

During Great Lent the Eighteenth Kathisma is read every weekday (Monday through Friday evening) at Vespers, and on Monday through Wednesday of Holy Week. In the Slavic usage this Kathisma is also read from the apodosis of the Exaltation of the Cross up to the forefeast of the Nativity of Christ, and from the apodosis of Theophany up to the Sunday of the Prodigal Son. The reason for this is that the nights are longer in winter, especially in the northern latitudes, so during this season three Kathismata will be chanted at Matins instead of two, so in order to still have a reading from the Psalter at Vespers, the Eighteenth Kathisma is repeated.

At Matins on Sundays and feast days throughout the year, special hymns called anabathmoi (Greek: άναβαθμοί, from βαθμός, 'step'; Slavonic: stepénnyi) are chanted immediately before the prokeimenon and Matins Gospel. These anabathmoi are compositions based upon the Songs of Ascents, and are written in the eight tones of Byzantine chant. The Anabathmoi for each tone consists of three stases or sets of verses (sometimes called antiphons), except for Tone 8 which has four stases. On Sundays, the anabathmoi are chanted according to the tone of the week; on feast days which do not fall on Sunday, the Anabathmoi almost always consist of the first stasis in Tone 4 (based on Psalm 128).[12]

Symbolically, the anabathmoi are chanted as a reminder that Christians are ascending to the Heavenly Jerusalem, and that the spiritual intensity of the service is rising as they approach the reading of the Gospel.[13]

The Western Daily Office was strongly influenced by the Rule of St. Benedict, where these psalms are assigned to Terce, Sext and None on weekdays. Over the centuries, however, various schedules have been used for reciting the psalms. In the modern Liturgy of the Hours of the Roman Catholic Church, the Gradual Psalms are used in several ways: