The Guldborgsund bridge (Danish: Guldborgbroen) spans the northern end of the Guldborgsund, between the islands of Lolland and Falster in Denmark. The bridge consists of two steel arched spans with a 30m central opening section having two rising bascules. It was built between 1933 and 1934, is 180m long and 7m wide, carrying two road carriageways and was officially opened by Prince Axel 6 October 1934. 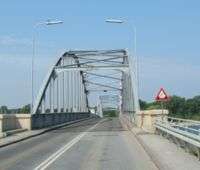 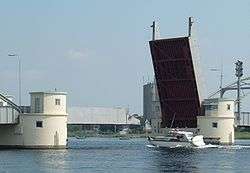 The bridge with one bascule open

This article is issued from Wikipedia - version of the 3/30/2015. The text is available under the Creative Commons Attribution/Share Alike but additional terms may apply for the media files.