Fuglsang is a 19th-century manor house and former artist's retreat near Toreby on the Danish island of Lolland, serving as a cultural centre as well as an active agricultural estate. The manor house serves as a venue for classical concerts and other cultural activities. The cultural centre also includes Fuglsang Art Museum, located in a purpose-built building designed by British architect Tony Fretton.

The history of the estate can be tracked back to 1368. The original defensive castle was located a few hundred metres further north, where remains can still be seen. The location at the edge of marshland where Flintinge Stream mouths in the Guldborgsund Strait, close to the only ford in the area, has made it of strategic importance in the area.

In the 16th century, Fuglsang was moved to its current location on a larger islet, surrounded by broad moats. This building was demolished in 1849 and replaced by a Neoclassical main building. The park, still seen today, was also founded at this event.

Rolf Viggo de Neergaard took over the property from his parents in 1866, but due to fungal attacks om the timber, the only 26-year-old building had to be demolished.

The current building was built from 1878-69 to the design of his cousin architect J. G. Zinn who has also designed several buildings at the Holmen Naval Base in Copenhagen. 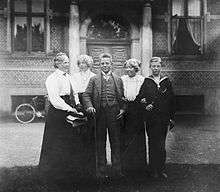 Carl Nielsen and family at Fuglsang

In 1885, de Neergaard married the 30 years younger Bodil Neergaard, and together they opened the house to a large number of visiting artists and particularly musicians until Rolf Viggo de Neergaard 's death. Both Edvard Grieg and Carl Nielsen were frequent visitors to the house and close friends of the couple.[1]

Upon her husband's death in 1915, Bodil Neergaard managed the large estate alone, and organized the social and church life of the household. In 1947, she bequested the estate to a trust, providing that her home and garden should be made a retreat upon her death. After her death in 1962, Refugiet Fuglsang was founded and served as a retreat for artists and other people of note until it had to close in 1995. The following year a local musical society was founded, arranging 9 annual concerts. Since 1997, the Storstrøm Chamber Ensamble has also been based at Fuglsang.

In January 2008, Fuglsang Art Museum opened in a purpose-built building close to the Fuglsang main building.

Today Fuglsang serves as a venue for concerts and other cultural activities.

The Fuglsang/Priorskov Estate has 1,731 hectares of land. It is managed as an active agricultural estate by a trust.