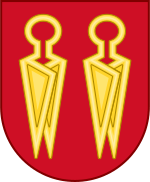 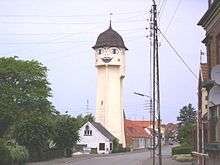 The water tower in Sakskøbing

Sakskøbing is a town with a population of 4,519 (1 January 2015)[1] and a former municipality (Danish, kommune) in Guldborgsund municipality in Region Sjælland on the northeast coast of the island of Lolland in south Denmark. The former Sakskøbing municipality, including the small island of Vigsø, covered an area of 176 km², and had a total population of 9,299 (2005). Its last mayor was Kaj Petersen a member of the Social Democrats (Socialdemokraterne) political party. The main town and the site of its municipal council is the town of Sakskøbing. To the north is Tår's Cove (Tårs Vig) and beyond that Rågø Strait (Rågø Sund), the waterway which separates Lolland from Zealand. A finger of Rågø Strait cuts into the former municipality forming Sakskøbing Fjord and then Sakskøbing River (Sakskøbing å), which meanders through the former municipality, as well as through Nykøbing Falster and Nysted until it terminates near the town of Bregninge.

On 1 January 2007 Sakskøbing municipality ceased to exist as the result of Kommunalreformen ("The Municipality Reform" of 2007). It was merged with existing Nykøbing Falster, Nysted, Nørre Alslev, Stubbekøbing, and Sydfalster municipalities to form the new Guldborgsund municipality. This created a municipality with an area of 907 km² and a total population of 63,533 (2005). The new municipality belongs to Region Sjælland ("Zealand Region").