Guindy National Park is a 2.70 km2 (1.04 sq mi) Protected area of Tamil Nadu, located in Chennai, South India, is the 8th smallest National Park of India and one of the very few national parks situated inside a city. The park is an extension of the grounds surrounding Raj Bhavan, formerly known as the 'Guindy Lodge', the official residence of the Governor of Tamil Nadu, India. It extends deep inside the governor's estate, enclosing beautiful forests, scrub lands, lakes and streams.

The park has a role in both ex-situ and in-situ conservation and is home to 400 blackbucks, 2,000 spotted deers, 24 jackals, a wide variety of snakes, geckos, tortoises and over 130 species of birds, 14 species of mammals, over 60 species of butterflies and spiders each, a wealth of different invertebrates—grasshoppers, ants, termites, crabs, snails, slugs, scorpions, mites, earthworms, millipedes, and the like. These are free-ranging fauna and live with the minimal of interference from human beings. The only major management activity is protection as in any other in-situ conservation area. The park attracts more than 700,000 visitors every year.

Once covering an area of 5 km2 (1.93 sq mi) of one of the last remnants of tropical dry evergreen forest of the Coromandel Coast, Guindy Park was originally a game reserve. In the early 1670s, a garden space was carved out of the Guindy forest and a residence called the Guindy Lodge was built by Governor William Langhorne (1672–1678), which had helped make St Thomas Mount a salubrious place for rest and recreation. The remaining of the forest area was owned by a British citizen named Gilbert Rodericks from whom it was purchased by the government in 1821 for a sum of ₹ 35,000. The original area of 505 ha was established as a Reserve Forest in 1910. Chital (spotted deer) were introduced into the park probably after 1945. Between 1961 and 1977, about 172 ha of the forest, primarily from the Raj Bhavan, was transferred to various government departments in order to build educational institutions and memorials.[2] In 1958, a portion of the forest area was transferred to the Union Education Ministry for establishing the Indian Institute of Technology, Madras. In the same year, another portion of the land was transferred to the Forest Department for creating the Guindy Deer Park and Children's Park at the instance of the then prime minister of India, Jawaharlal Nehru. Memorials for Rajaji and Kamaraj were built in 1974 and 1975, respectively, from parcels of land acquired from the Raj Bhavan. In 1977, the forest area was transferred to the Tamil Nadu Forest Department. In 1978, the whole of the remaining area, popularly known then as the Guindy Deer Park, was declared a national park. It was walled off from the adjacent Raj Bhavan and Indian Institute of Technology Madras Campus in the late 1980s.[3]

The Guindy National Park, Raj Bhavan and IIT-Madras habitat complex has historically enjoyed a certain degree of protection and has continued to support some of the last remnants of the natural habitats that typify the natural range of plant and animal biodiversity of the Coromandel-Circar coastal plains in the northeastern Tamil Nadu.[4][5] The ecosystem consists of the rare tropical dry evergreen scrub and thorn forests receiving about 1200 mm of rainfall annually. This vegetation has been reclassified as the Albizia amara Boiv. community. The region’s physiognomy occurs as discontinuous or dense scrub-woodlands and thickets, containing species such as introduced Acacia planifrons, Clausena dentata shrubs, palmyrah palm (Borassus flabellifer), Randia dumetorum, Randia malabarica, Carissa spinarum, Acacia chundra, exotic cactus Cereus peruviana and Glycosmis mauritiana.

The park has a tropical dissymmetric climate. The mean annual temperatures are 32.9 °C (maximum) and 24.3 °C (minimum). Rainfall ranges from 522 to 2,135 mm, with an average annual rainfall of 1,215 mm. The summer season in April and May determines the peculiar vegetation of the Coromandel-Circar coast. Between June and December, wet season prevails, with dry season occurring between January and March. The area also has a cleared meadow called Polo Field measuring about 230 × 160 m.[2] The park also has a lake known as the 'Tangal Eri'.

The park is protected by a perimeter wall for a length of 9.5 km. There is an extensive network of roads and trails. The road network covers about 14 km within the park. The park has two large tanks, namely, Kathan Kollai (KK Tank) and Appalam Kolam (AK Tank), in addition to two ponds, which usually dry up during summer.[2] The presence of the park and the surrounding green areas resulted in the byname, the green lungs of Chennai, for the Adyar–Guindy area.

The park has a dry evergreen scrub and thorn forest, grasslands and water bodies with over 350 species of plants including shrubs, climbers, herbs and grasses and over 24 variety of trees, including the sugar-apple, Atlantia monophylla, wood-apple, and neem. This flora provides an ideal habitat for over 150 species of birds. About one-sixth of the park has been left as open grassland to preserve that habitat for blackbucks. Though both the species of blackbuck and spotted deer have their natural habitat in grassland, the spotted deer prefer bushes and can adjust in land covered with shrubbery.

The near threatened blackbuck, considered the flagship species of the park,[6] was introduced in 1924 by Lord Willingdon and has seen a population decline in recent times. While blackbucks are a native faunal element of the park, chitals were introduced into the park from the Government House on Mount Road when Raj Bhavan was developed, probably in the late 1940s, although the exact date is not known. Some albino male blackbucks were also introduced by the Maharaja of Bhavnagar.[2] Per the census conducted on 29 February 2004, the population of Blackbuck was 405 (10 spotted in the IIT campus).[3] The chital population in the Park, however, appears to have been steady or even increased since their introduction into the area many decades ago.[2] Per the census conducted on 29 February 2004, the population of the spotted deer was 2,650. Of these, 1,743 were female and 336 were fawns. The census was taken in the Guindy National Park and the adjoining areas of the Indian Institute of Technology and the Raj Bhavan campus using King's transect method, which would only reveal the numbers close to the actual figure.

Monkeys having a friendly fight at the Children's park/Guindy National Park, Chennai.

The park is home to about 9 species of amphibians.[2] There are also many kinds of reptiles, including saw-scaled viper and the fan-throated lizard. Some species of tortoise and turtles—especially the endangered star tortoise, lizards, geckos, chameleons and the common Indian monitor lizard—are found here, as well as a large variety of insects including 60 species of spiders and 60 species of butterflies. 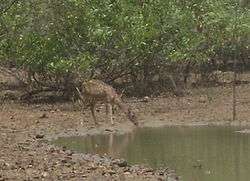 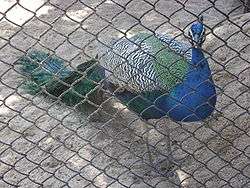 Guindy Snake Park, formerly the location of Madras Crocodile Bank Trust, is next to the Guindy National Park. The Snake Park in Chennai gained statutory recognition as a medium zoo from the Central Zoo Authority in 1995. There one can see king cobra, pythons, vipers and other reptiles.

For ex-situ conservation, about 22 acres (8.9 ha) of the Guindy National Park has been carved out into a park known as the Children's Park and play area at the northeast corner of the national park with a collection of animals and birds. The Children's Park gained statutory recognition as a medium zoo from the Central Zoo Authority in 1995. Animals in the Children’s Park include black buck, sambar, spotted deer, porcupine, jackal, python, grey pelican, night heron, cormorant, cockatiel, parrot, mongoose, common peafowl, crocodile, common otter, rhesus monkey, bonnet monkey and common langur. The Children's Park also exhibits a fossilised tree specimen which is estimated to be about 20 million years old[8] and a statue of a Tyrannosaurus at the entrance. The Children's Park and the Snake Park have separate entrances and independent entry fees. Drinking water, vendors and catering are available. The entrance lies on the busy Sardar Patel Road next to the Adyar Cancer Institute.

There is a new interpretation center about the biodiversity of the park. Entry into this protected reserve is restricted, and visitors can go into the core area only when escorted by a forest ranger from the Forests Department.[9] The rear southeast edge of the park adjoins the campus of Indian Institute of Technology, Madras. Along its northern fringes on the Sardar Patel road are the Cancer Institute, CLRI campus, the Anna University, the Raj Bhavan and spaces allotted for the Gandhi Mandapam, Kamaraj Memorial and Rajaji Memorial.[8]