Henry John Heinz III was born on October 23, 1938 in Pittsburgh, Pennsylvania, the son of Joan (Diehl) and H. J. Heinz II, heir to the H. J. Heinz Company. An only child, Heinz moved to San Francisco, California, with his mother and stepfather, U.S. Navy Captain C.C. "Monty" McCauley following his parents' divorce in 1942. Although he was raised and primarily resided in San Francisco throughout his childhood, Heinz often spent the summer months with his father in Pittsburgh.[3]

In 1956, Heinz graduated from Phillips Exeter Academy.[2] He then attended and graduated from Yale University in 1960, majoring in History, Arts and Letters, and subsequently graduated from Harvard Business School in 1963. It was during his years at Harvard, during summer break, that he met his future wife, Teresa Simões Ferreira, who attended the University of Geneva. Upon graduating from Harvard Business School in 1963, Heinz served in the United States Air Force Reserve and was on active duty during the same year.[3] He remained in the Air Force Reserve until 1969.[2]

Before entering politics, Heinz served as an assistant to Pennsylvania Republican U.S. Senator Hugh Scott and played an active role as assistant campaign manager during Scott's campaign for re-election. Heinz then worked in the financial and marketing division of the H. J. Heinz Company between 1965 and 1970, after which he became a professor of business at the Carnegie Mellon University's Graduate School of Industrial Administration.[3]

In 1971, Heinz entered politics after Representative Robert Corbett, who represented Pennsylvania's 18th congressional district, died in office. After winning the Republican primary, Heinz won the special election on November 2, 1971 to fill the vacancy created by Corbett's death. Heinz was re-elected to the U.S. House of Representatives in 1972 and 1974.[2][3]

Heinz opted not to run for re-election to his seat in the House of Representatives, choosing instead in 1976 to run for Pennsylvania's open United States Senate seat created by the retirement of incumbent Hugh Scott. Heinz won the election, and was subsequently re-elected in 1982 and in 1988.[3]

The New York Times noted that Heinz built a solid record in the Senate as "a persistent defender of the nation's growing elderly population and of the declining steel industry", that he was "instrumental in pushing through legislation that put the Social Security system on sounder financial footing," and "played a major role in strengthening laws regulating retirement policies, pension plans, health insurance and nursing homes", and "pushed successfully for trade laws that encourage American exports and protect American products, like steel, from foreign imports."[5]

On April 4, 1991, Heinz and six other people, including two children, were killed when a Sun Co. Aviation Department Bell 412 helicopter and a Piper Aerostar with Heinz aboard collided in mid-air above Merion Elementary School in Lower Merion Township, Pennsylvania. All aboard both aircraft, as well as two children at the school, were killed.[6] The helicopter had been dispatched to investigate a problem with the landing gear of Heinz's plane. While moving in for a closer look, the helicopter collided with the plane, causing both aircraft to lose control and crash.[7] The subsequent NTSB investigation attributed the cause of the crash to poor judgment by the pilots of the two aircraft involved.[8][9]

Following a funeral at Heinz Chapel[10] and a Washington, D.C. memorial that was attended by President George H. W. Bush and Vice President Dan Quayle,[11] Senator Heinz was interred in the Heinz family mausoleum in Homewood Cemetery, located in the Squirrel Hill neighborhood of Pittsburgh, Pennsylvania.[2]

Heinz's long time friend, Senator Tim Wirth of Colorado, remarked: "He really believed he could make the world a better place, such a contrast to the jaded resignation of our time. He could send the Senate leadership up a wall faster than anyone I've seen." Heinz's son André said at the services: "Dad, I am so grateful for the time we had, and I miss you and I love you."[12] 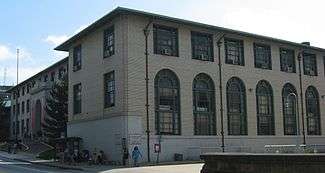 The John Heinz National Wildlife Refuge at Tinicum (formerly known as the Tinicum Wildlife Preserve) was renamed in his honor following his death. The 1,200 acre (4.9 km²) refuge includes the largest remaining freshwater tidal marsh in Pennsylvania, as well as other habitats that are home to a variety of plants and animals native to Southeastern Pennsylvania.

His family established the Heinz Awards in 1993, which honor individual innovation in five categories. One of the Jefferson Awards for Public Service annual awards, for "Greatest Public Service by an Elected or Appointed Official", is named in his honor.

Several institutions bear his name, including: