Cory Scott Gardner[1] (born August 22, 1974) is an American politician who is the junior United States Senator from Colorado. He is a Republican and was previously the U.S. Representative for Colorado's 4th congressional district. Prior to that, he was a member of the Colorado House of Representatives.

Gardner announced his candidacy for the U.S. Senate in March 2014, quickly clearing the Republican primary field,[2] and defeated Democratic incumbent Mark Udall in the November 2014 race.[3]

Gardner proposed legislation in 2006 that would set aside money in a rainy-day fund that would help protect the state from future economic downturns. His proposal relied on Referendum C money for future budget emergencies.[10] He staunchly opposed any tax increases. He helped create the Colorado Clean Energy Development Authority, which issued bonds to finance projects that involve the production, transportation and storage of clean energy until it was repealed in 2012.[11][12]

In June 2006, he called on Republican Governor Bill Owens to call a special session addressing the issue of illegal immigration.[13]

The Denver Post hailed Gardner as “the GOP Idea Man”. He was named one of the Top 40 young Republican lawmakers by the magazine Rising Tide. He became House Minority Whip in January 2007.[18]

Gardner ran unopposed in the Republican primary before going on to defeat Democratic nominee Brandon Shaffer 59%–37% in the general election.[24]

Shortly after taking office, Gardner introduced legislation that would speed up clean-air permits for companies engaged in offshore drilling in Alaska, which he says would create jobs and reduce dependence on foreign oil.[25] The House passed Gardner's bill by a vote of 253 to 166 on June 22, 2011.[26]

On June 6, 2013, Gardner introduced the Reducing Excessive Deadline Obligations Act of 2013 (H.R. 2279; 113th Congress), a bill that would amend the Comprehensive Environmental Response, Compensation, and Liability Act of 1980 and the Solid Waste Disposal Act.[27] It is bill that would change the frequency of reports from the United States Environmental Protection Agency (EPA) about solid waste regulations.[28] Instead of being forced to automatically review the regulations every three years, the EPA would be able to review them on an as needed basis.[29] It would also grant precedence to state requirements for solid waste disposal when creating new federal requirements.[28]

On March 6, 2014, Gardner introduced the Domestic Prosperity and Global Freedom Act (H.R. 6; 113th Congress), a bill that would direct the United States Department of Energy (DOE) to issue a decision on an application for authorization to export natural gas within 90 days after the later of: (1) the end of the comment period for that decision as set forth in the Federal Register, or (2) the date of enactment of this Act.[30]

Gardner has stated that he believes climate change is occurring, but he is unsure whether humans are causing it.[31][32][33]

Gardner supports construction of the Keystone Pipeline. He is pro-fracking.[34]

In March 2011, Gardner introduced bipartisan legislation that would require congressional committees to hold hearings on programs that are deemed duplicative by a U.S. Government Accountability Office report. Gardner has said he believes such a measure would reduce waste in government.[35][36]

Gardner is a signer of Americans for Tax Reform’s Taxpayer Protection Pledge.[39] He also strongly supports legislation which would require that the US Federal Reserve be audited.[40]

On July 10, 2014, Gardner introduced legislation to reform the Earned Income Tax Credit program. The legislation seeks to reduce fraud in the program and dedicate the savings to increasing the credit for working families.[41]

In August 2014, Gardner broke ranks with the Republican Party and voted against a bill that would have dismantled the Deferred Action for Childhood Arrivals.[42] Gardner says he supports immigration reform in the form of a guest worker program and increased border security.[43]

In 2011, he voted in support of the “Respect for Rights of Conscience Act”, which states that “nothing in the Affordable Care Act shall be construed to authorize a health plan to require a provider to provide, participate in, or refer for a specific item or service contrary to the provider’s religious beliefs or moral convictions.”[44]

At the end of 2013, Gardner announced that he would introduce a bill to prohibit executives of state healthcare exchanges from getting bonuses. According to Ripon Advance, a CEO of a state health exchange with low enrollment got a bonus, and Gardner's bill would seek to prevent that from happening.[45]

In 2012, Gardner was one of 33 Republicans to vote for the Senate version of the Violence Against Women Act of 1994 (VAWA), which re-authorized the bill and expanded protections for Native Americans, immigrants, and gays.[46]

In 2012 and 2013, Gardner co-sponsored personhood legislation titled the "Life Begins at Conception Act".[47] Gardner later said that he changed his mind on personhood, after listening to voters.[48] According to The Denver Post, “Gardner conceded that with his new position on personhood, he might be accused of flip-flopping simply to make himself more palatable to statewide voters.”[49] The nonpartisan Factcheck.org said “It would be clearer to say that Gardner supports efforts to ban abortion that could also ban some forms of birth control. As for his change of position, voters in Colorado should know Gardner still supports a federal bill that would prompt the same concerns over birth control as the state measure he says he rejects on the same grounds.”[50]

In June 2014, Gardner called for over-the-counter access to oral contraceptives and said the birth control pill would be safer and cheaper if it was available over the counter.[51]

In response to the October 2014 announcement from the U.S. Supreme Court allowing same-sex marriage to become the law in 30 states including Colorado, Gardner reaffirmed his position that marriage should only be between a man and a woman but stated, "This issue is in the hands of the courts and we must honor their legal decisions."[52] 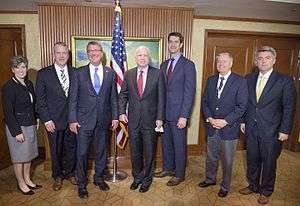 Gardner was the Republican nominee for Senate, and won against incumbent Senator Mark Udall in the general election. Gardner won by a 3% margin over Udall, with a 49% to 46% advantage. Gardner received 965,974 votes to Udall's 916,245 votes.[3][53]

In October 2014, the Denver Post endorsed Gardner, writing that "he has emphasized economic and energy issues (and was, for example, an early supporter among Republicans of renewable energy). ... "his past views on same-sex marriage are becoming irrelevant now that the Supreme Court has let appeals court rulings stand and marriage equality appears unstoppable. And contrary to Udall's tedious refrain, Gardner's election would pose no threat to abortion rights."[54] Former Denver Broncos quarterback John Elway endorsed Gardner.[55]

No Labels performed independent get-out-the-vote efforts on behalf of its Problem Solvers, including Gardner.[56]