Habsburg Netherlands is the collective name of Holy Roman Empire fiefs in the Low Countries held by the House of Habsburg and later by the Spanish Empire, also known as the Spanish Netherlands. The rule began in 1482, when after the death of the Valois-Burgundy duke Charles the Bold the Burgundian Netherlands fell to the Habsburg dynasty by the marriage of Charles's daughter Mary of Burgundy to Archduke Maximilian I of Austria.

Then known as Seventeen Provinces, they were held by the Spanish Empire from 1556, and are therefore also known as the Spanish Netherlands from that time on. In 1581, the Seven United Provinces seceded to form the Dutch Republic; the remaining Spanish Southern Netherlands eventually passed on to Habsburg Austria. Finally the Austrian Netherlands were annexed by the French First Republic in 1795.

Further information: Timeline of Burgundian and Habsburg acquisitions in the Low Countries

The Habsburg Netherlands was a geo-political entity covering the whole of the Low Countries (i.e. the present-day Netherlands, Belgium, Luxembourg, and French Nord-Pas-de-Calais) from 1482 to 1581. 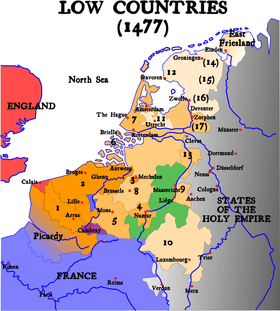 Burgundian Netherlands (orange) upon the death of Charles the Bold

Already under the rule of the Burgundian duke Philip the Good (1419–1467), the provinces of the Netherlands began to grow together: Flanders, Artois and Mechelen, Namur, Holland, Zeeland and Hainaut, Brabant, Limburg and Luxembourg were ruled in personal union by the Valois-Burgundy monarchs and represented in the States-General assembly. The centre of the Burgundian possessions was the Duchy of Brabant, where the Burgundian dukes held court in Brussels.

Philip's son Duke Charles the Bold (1467–1477) also acquired Guelders and Zutphen and even hoped for the royal title from the hands of the Habsburg emperor Frederick III by marrying their children Mary and Maximilian. Deeply disappointed, he entered into the disastrous Burgundian Wars and was killed in the Battle of Nancy.

Upon the death of Mary of Burgundy in 1482, her substantial possessions including the Burgundian Netherlands passed to her son, Philip the Handsome. Through his father Maximilian I, Holy Roman Emperor from 1493, Philip was a Habsburg scion, and so the period of the Habsburg Netherlands began. The period 1481–1492 saw the Flemish cities revolt and Utrecht embroiled in civil war, but by the turn of the century both areas had been pacified by the Spanish rulers.

Philip's son Charles V, Holy Roman Emperor, born in Ghent, succeeded his father in 1506, when he still was a six-year-old minor. His grandfather Emperor Maximilian I incorporated the Burgundian heritage into the Burgundian Circle, whereafter the territories in the far west of the Empire developed a certain grade of autonomy. Attaining full age in 1515, Charles went on to rule his Burgundian heritage as a native Netherlander. He acquired the lands of Overijssel and the Bishopric of Utrecht (see Guelders Wars), purchased Friesland from Duke George of Saxony and regained Groningen and Gelderland. His Seventeen Provinces were re-organised in the 1548 Burgundian Treaty, whereby the Imperial estates represented in the Imperial Diet at Augsburg acknowledged a certain autonomy of the Netherlands. It was followed by a pragmatic sanction by the Emperor the next year, which established the Seventeen Provinces as an entity separate from the Empire and from France.

By a 1522 inheritance treaty with his younger brother Archduke Ferdinand I of Austria, Emperor Charles V had established the Austrian and the Spanish branch of the Habsburg dynasty. Upon his abdication in 1556, the Seventeen Provinces fell to the Spanish Crown. Charles son and successor King Philip II of Spain by his despotism and Catholic persecutions sparked the Dutch Revolt and the Eighty Years' War. The Spanish hold on the northern provinces was more and more tenuous. In 1579 the northern provinces established the Protestant Union of Utrecht, in which they declared themselves independent as the Seven United Provinces by the 1581 Act of Abjuration.

After the secession of 1581, the southern provinces, called "'t Hof van Brabant" (of Flandria, Artois, the Tournaisis, Cambrai, Luxembourg, Limburg, Hainaut, Namur, Mechelen, Brabant, and Upper Guelders) remained with the House of Habsburg until the French Revolutionary Wars. After the extinction of the Spanish Habsburgs and the War of the Spanish Succession, the southern provinces were also known as the Austrian Netherlands from 1715 onwards.

The provinces were ruled on their behalf by a governor (stadtholder or landvoogd):

In 1578 the Dutch insurgents appointed Archduke Matthias of Austria governor, though he could not prevail and resigned before the 1581 Act of Abjuration.