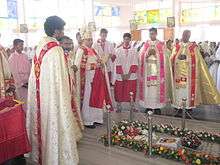 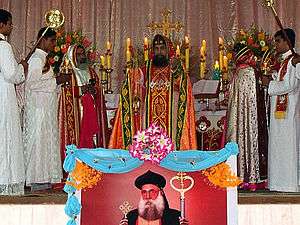 The East Syriac word Qurbana and the West Syriac word Qurbono are derived from the Aramaic term Qurbana (ܩܘܪܒܢܐ). When the Temple stood in Jerusalem, and sacrifices were offered, "Korban" was a technical Hebrew term for some of the offerings that were brought there. It comes from a Hebrew root, "karav", meaning "to draw close or 'near'". A required Korban was offered morning and evening daily and on holidays (at certain times, additional 'korbanot' were offered), in addition to which individuals could bring an optional personal Korban.

The Holy Qurbana is referred to as "complete" worship, since it is performed for the benefit of all members of the Church. The other sacraments are celebrated for individual members. Thus the Holy Qurbana is believed to be the sacrament that completes all the others. Hence it is called the "sacrament of perfection" or the "queen of sacraments".

Liturgy of Addai and Mari

The Liturgy belongs to the East Syrian Rite, the anaphora or Eucharistic Prayer that is part of this liturgy, possibly dating back to 3rd-century Edessa,[1] even if the outline of the current form can be traced as far back only as the time of the Patriarch Mar Isho-Yab III in the 7th century. This liturgy is traditionally attributed to Saint Addai (disciple of Saint Thomas the Apostle) and Saint Mari (a disciple of Saint Addai). In the form given in the oldest manuscripts, all of the High Middle Ages, this anaphora does not include the Words of Institution, a matter that raised ecumenical concerns.

West Syrian liturgical rite is developed out of the ancient Antiochene Rite of the Patriarchate of Antioch, adapting the old Greek liturgy into Syriac, the language of the Syrian countryside.

West Syrian liturgies represent one of the major strains in Syriac Christianity, the other being the East Syrian Rite, the liturgy of the Church of the East and its descendants. Distinct West Syrian liturgies developed following the Council of Chalcedon, which largely divided the Christian community in Antioch into Melkites, who supported the Emperor and the Council and adopted the Byzantine Rite, and the non-Chalcedonians, who rejected the council and developed an independent liturgy – the West Syrian Rite. An independent West Syrian community that grew around the monastery of Saint Maron eventually developed into the Maronite Church. A variant of the West Syrian Rite, the Malankara Rite, developed in the ancient Malankara Church of India and is still used in its descendant churches. They are the Jacobite Syrian Christian Church,the Syro-Malankara Catholic Church, the Malankara Orthodox Syrian Church, the Mar Thoma Syrian Church of Malabar, the Malabar Independent Syrian Church.

The Liturgy is based on the traditions of the ancient rite of the Early Christian Church of Jerusalem, as the Mystagogic Catecheses of St Cyril of Jerusalem imply. The Liturgy is associated with the name of James the Just, the "brother" of Jesus and patriarch among the Jewish Christians at Jerusalem. Saint James was martyred at the hands of a mob incensed at his preaching about Jesus and his "transgression of the Law" - an accusation made by the Jewish High Priest of the time, Hanan ben Hanan. Among the Eastern liturgies, the Liturgy of Saint James is one of the Antiochene group of liturgies, those ascribed to Saint James, to Saint Basil, and to Saint John Chrysostom.

The Liturgy of Saint James is considered to be the oldest surviving liturgy developed for general use in the Church. Its date of composition is still disputed with some authorities proposing an early date, perhaps ca. AD 60, close to the time of composition of Saint Paul's Epistle to the Romans, while most authorities propose a fourth-century date for the known form, because the anaphora seems to have been developed from an ancient Egyptian form of the Basilean anaphoric family united with the anaphora described in The Catechisms of St. Cyril of Jerusalem.[2]