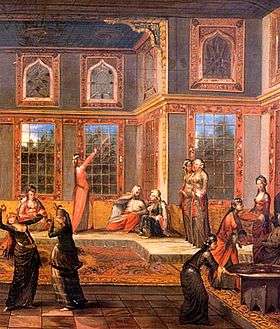 Imaginary scene from the sultan's harem

The Imperial Harem (Turkish: Harem-i Hümâyûn) of the Ottoman Empire, existing between 1299 and 1923, was the Ottoman sultan's harem composed of the wives, servants (both female slaves and eunuchs), female relatives, and the sultan's concubines, occupying a secluded portion of the Ottoman imperial household.[1] This institution played an important social function within the Ottoman court, and demonstrated considerable political authority in Ottoman affairs, especially during the long period known as the Sultanate of Women.[2] The utmost authority in the Imperial Harem was the Valide Sultan, who ruled over the other women in the household and was often of slave origin herself. The Kizlar Agha (Kızlarağası, also known as the "Chief Black Eunuch" because of the black African origin of most aghas) was the head of the eunuchs responsible for guarding the Imperial Harem.

The word harem is derived from the Arabic harim or haram which give connotations of the sacred and forbidden. The female quarters of Turkish households were then referred to as haremlik due to their prevailing exclusivity.[3]

The Harem as a social and political institution

The harem was the ultimate symbol of the Sultan's power. His ownership of women, mostly slaves, was a sign of wealth, power, and sexual prowess. The institution was introduced in the Turkish society with adoption of Islam, under the influence of the Arab Caliphate, which the Ottomans emulated. To ensure the obedience of the women, many of them were bought and kept into slavery. However, not all members of the Harem were slaves. The main wives, especially those taken into marriage to consolidate personal and dynastic alliances were free women. This was the exception, not the rule. The relationship between slavery and polygamy/harems in the Turkish Harem continued until 1908, at the very least.

The imperial harem also served as a parallel institution the sultan's household of male servants. The women were provided with an education roughly on par with that provided to male pages, and at the end of their respective educations they would be married off to one another, as the latter graduated from the palace to occupy administrative posts in the empire's provinces.[4] Consequently, only a small fraction of the women in the harem actually engaged in sexual relations with the sultan, as most were destined to marry members of the Ottoman political elite, or else to continue service to the Valide Sultan.[5]

The Imperial Harem occupied one of the large sections of the private apartments of the sultan at the Topkapi Palace which encompassed more than 400 rooms. After 1853, an equally lavish harem quarter was occupied at the new imperial palace at Dolmabahçe.

Role of the Valide Sultan

The mother of a new sultan came to the harem with pomp, circumstance and assumed the title of valide sultan upon her son's ascension. She was paramount chief and ran the Harem and ruled over the members of the dynasty. The Valide Sultan who influenced the political life of the Ottoman Empire during various periods of history (such as the Sultanate of Women in the 16th and 17th centuries) had the authority to regulate the relations between the sultan and his wives and children. At times the valide sultan acted as regent for her son, particularly in the seventeenth century, when a series of accidents necessitated regencies that endowed the position of Queen Mother with great political power.[6]

In 1868, Empress Eugénie of France visited the Imperial harem, which was to have a lasting effect. She was taken by the sultan Abdülaziz to his mother, Valide Sultan Pertevniyal Sultan, but reportedly, Pertevniyal became outraged by the presence of a foreign woman in her harem, and greeted the Empress with a slap in the face, almost provoking an international incident.[7] The visit of the Empress, however, did cause a dress reform in the harem by making Western fashion popular among the harem women, who dressed according to Western fashion ever after.[8]

Role of the court ladies 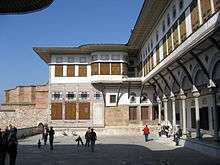 The Courtyard of the Favourites in the harem of Topkapı Palace

For the perpetuation and service of the Ottoman Dynasty, beautiful and intelligent slave girls were either captured in war, recruited within the empire, or procured from neighbouring countries to become imperial court ladies (Cariyes). Odalisque, a word derived from the Turkish oda, meaning chamber: thus connoting odalisque to mean chamber girl or attendant, was not a term synonymous with concubine; however, in western usage the term has come to refer specifically to the harem concubine.[3]

The court ladies who were introduced into the harem in their tender age were brought up in the discipline of the palace. They were promoted according to their capacities and became kalfas and ustas.

The court ladies with whom the sultan shared his bed became a member of the dynasty and rose in rank to attain the status of Gözde (the Favorite), Ikbal (the Fortunate) or Kadın (the Woman/Wife). The highest position was the Valide Sultan, the legal mother of the sultan, who herself used to be a wife or a concubine of the sultan's father and rose to the supreme rank in the harem. No court lady could leave or enter the premises of the harem without the explicit permission of the valide sultan. The power of the valide sultan over concubines even extended to questions of life and death, with eunuchs directly reporting to her.

The court ladies either lived in the halls beneath the apartments of the consorts, the valide sultan and the sultan, or in separate chambers. The kadıns, who numbered up to four, formed the group who came next in rank to the valide sultan. Right below the kadıns in rank were the ikbals, whose number was unspecified. Last in the hierarchy were the gözdes. The favorite consort who was the mother of the crown prince and the other princes (haseki sultan), as well as the other kadıns, enjoyed a privileged position in the hierarchy of the harem.[9]

Role of the eunuchs 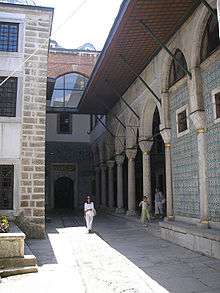 The Courtyard of the Eunuchs in Topkapı Palace

At Topkapı Palace, at the court of the Ottoman sultans, the harem staff included eunuchs. These were slaves, either captured in war or purchased from beyond (particularly Ethiopia and Sudan). Black eunuchs usually were Sandali ('clean shaven' i.e. their genitalia were removed completely), hence they were preferred for harem service, while white eunuchs usually kept part of their penis or testicles, so they were assigned to less 'intimate' duties, e.g. secretarial. They were often donated to the Sultan by his governors, in total about six- to eight hundred.

The castrated servicemen in the Muslim and Turkish states in the Middle Ages were recruited to serve in the palace from the times of Sultan Mehmed I onwards. These eunuchs who were trained in the palace and were given the charge of guarding the harem rose in rank after serving in many positions.[10] The harem eunuchs and the harem organization were under the command of the Chief harem eunuch, who was also called the Master of the Girls (Kızlar Ağası) or Chief Black Eunuch. They supervised the quarters where the female population of the palace lived. They had influence on the palace and later on the state administration in the 17th and 18th centuries as they had access to the sultan and the sultan's family and became very powerful. Eunuchs at the Ottoman court were preferably taken from Africa, especially Sudan.

The Chief Black Eunuch was sometimes considered second only to the Grand Vizier (head of the imperial government, but often working in his own palace or even away, e.g., on military campaign) in the confidence of the Sultan, to whom he had and arranged access (including his bedchamber, the ne plus ultra for every harem lady), also being his confidential messenger. As commander of an imperial army corps, the halberdiers ('baltacı'), he even held the supreme military dignity of three-horsetail pasha (general).

Meanwhile, the Chief White Eunuch (Kapı Ağası), was in charge of 300 to 900 white eunuchs as head of the 'Inner Service' (the palace bureaucracy, controlling all messages, petitions, and State documents addressed to the Sultan), head of the Palace School, gatekeeper-in-chief, head of the infirmary, and master of ceremonies of the Seraglio, and was originally the only one allowed to speak to the Sultan in private. In 1591, Murad III transferred the powers of the white to the black eunuchs as there was too much embezzlement and various other nefarious crimes attributed to the white eunuchs, but later they regained some favour.

During the Sultanate of Women (Kadınlar Sultanati), eunuchs increased their political leverage by taking advantage of minor or mentally incompetent sultans. Teenage Sultans were "guided" by regencies formed by the Queen Mother (Valide Sultan), the Grand Vizier and the Valide's other supporters- and the Chief Black Eunuch was the Queen Mother's and Chief Consorts' intimate and valued accomplice.

The apartments of the princes, also called kafes (cage), were part of the imperial Ottoman harem

The Ottoman harem was often called "the golden cage". After Ahmed I's reformation of the law of succession to Ottoman throne and decline of sancağa çıkma (system of appointing young princes as provincial governors to train them in how to rule), princes were confined the kafes, (cage, also the Şimşirlik, Boxwood Quarters) in Topkapı Palace. They lived here in seclusion until they either acceded to the throne or were executed in order to prevent a war of succession.