Jerry Edwin Abramson (born September 12, 1946) is a Democratic politician who was the 55th Lieutenant Governor of Kentucky.[1] On November 6, 2014, Governor Steve Beshear announced that Abramson would step down from his position as Lieutenant Governor to accept the job of Director of Intergovernmental Affairs in the Obama White House. He was replaced by former State Auditor Crit Luallen.[2]

Abramson's long period of service to Louisville as its mayor, as well as the weak opposition he faced in mayoral elections, led to the local nickname of "mayor for life", a title frequently used by Louisville's own popular radio personality Terry Meiners. Abramson's popularity resulted in Bluegrass Poll approval ratings ranging from a 91 percent high in 1990 to a 73 percent low in 1994.[3]

From 1993 to 1994, he was President of the United States Conference of Mayors. He was a member of the Mayors Against Illegal Guns Coalition,[4] an organization formed in 2006 and co-chaired by New York City mayor Michael Bloomberg and Boston mayor Thomas Menino.

Abramson has also served as an executive-in-residence at Bellarmine University.[5]

Abramson grew up in the Louisville suburb of Strathmoor Village, Kentucky.[6] Before serving as a mayor of Louisville, he worked at Abramson's Market at 738 South Preston Street[6] in Louisville's Smoketown neighborhood, then owned by his father Roy and founded by his grandparents. He graduated from Seneca High School and served for two years in the Army, but did not see combat.

In the 1985 general election, Abramson defeated the Republican candidate Bob Heleringer, a conservative member of the Kentucky House of Representatives from 1980 to 2002. Abramson was highly popular as mayor from 1986 to 1999 because of growth in the Louisville economy as the decline in urban population that began in the 1950s slowed greatly. Abramson began the nonprofit civic beautification program Operation Brightside, which included the $700 million expansion of Louisville International Airport. He worked to revitalize the city's waterfront with the creation of Waterfront Park and expanded the local economy by recruiting the international headquarters for Tricon Global Restaurants (now Yum! Brands), the Presbyterian Church (USA) and United Parcel Service Air Hub 2000 (a facility now known as Worldport).

Abramson normally would have left office in 1998. However, his original third term was extended by one year as part of a state-mandated transition to align the dates of local and federal elections.

Subsequent to his first tenure as mayor, Abramson practiced law with the Frost Brown Todd firm and taught at Bellarmine University.[7] 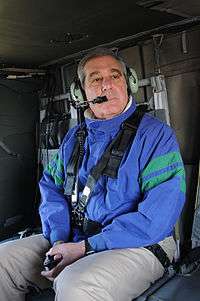 Abramson while serving as Mayor

After the merger of Louisville and Jefferson County was approved, the previous term limits no longer applied. Abramson was easily elected the first Mayor of Louisville Metro in 2002 by 73.4 percent of the vote over Republican challenger Jack Early, former mayor of Hurstbourne, Kentucky, a major suburb of Louisville.[8]

One of Abramson's first actions as Metro Mayor was to appoint Robert C. White Chief of the troubled Louisville Metro Police Department, the first African-American to hold the post. The move proved to be politically wise, helping to calm criticism of the department from the black community in Louisville.[9]

Abramson is the first person of Jewish faith to have served as mayor of Louisville. He lives in the Crescent Hill neighborhood with his wife, Madeline.[6]

On July 19, 2009, Kentucky Governor Steve Beshear announced that Abramson would step down after his second term as Mayor of Louisville Metro to run as Lieutenant Governor in his re-election campaign in 2011. This came after Dan Mongiardo decided to run for U.S. Senate. Since Abramson's planned departure was announced, many candidates announced they would run to succeed him in 2010.[11] Businessman Greg Fischer won the Democratic nomination and general election to succeed Abramson.

The Beshear-Abramson ticket won in a landslide against Senate President David Williams and his running mate Richie Farmer. Abramson took office as the 55th Lieutenant Governor of Kentucky on December 13, 2011. His political future had been a subject of considerable speculation, but in an August 2013 speech before the Elizabethtown Rotary Club, he announced that he would not run for governor in 2015, saying,[12]

I would like to in the next chapter of my life focus on one thing I really believe will make a significant difference in the development of Kentucky. And that focus is on education.

On November 6, 2014, Abramson announced that he had been appointed by President Barack Obama to the position of Deputy Assistant to the President and White House Director of Intergovernmental Affairs.[13] Abramson also informed Gov. Beshear of his intention to resign as Lieutenant Governor of Kentucky effective November 13, 2014 at 5:00 PM.[14] Gov. Beshear also announced on November 6 his appointment of former State Auditor Crit Luallen to serve out the remainder of Abramson's term.[14]