Jefferson County is a county located in the U.S. state of Kentucky. As of the 2010 census, the population was 741,096.[1] It is the most populous county in Kentucky and is more than twice as large as the second most populous, Fayette. The county was formed in 1780 and named for future President Thomas Jefferson, who was Governor of Virginia at the time.[2]

In 2003, its government merged with that of its largest city and county seat, Louisville, forming a new entity, the Louisville/Jefferson County Metro Government (official long form)[3] or Louisville Metro (official short form).[4] Whenever possible, the metro government generally avoids any self-reference including the name "Jefferson County" and has even renamed the Jefferson County Courthouse as "Metro Hall". 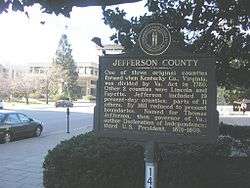 The last major American Indian raid in present-day Jefferson County was the Chenoweth Massacre on July 17, 1789.

Prior to the 2003 merger, the head of local government was the County Judge/Executive, a post that still exists but now has few powers. The office is currently held by Queenie Averette.[6]

The highest point is South Park Hill, elevation 902 feet (275 m), located in the southern part of the county. The lowest point is 383 feet (117 m) along the Ohio River just north of West Point, Kentucky. 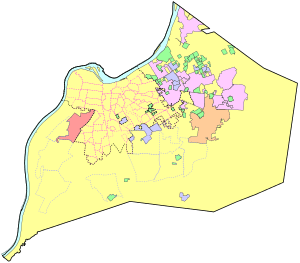 † Formerly a census-designated place in the county, but, in 2003, these places became neighborhoods within the city limits of Louisville Metro.