William Taylor Barry (February 5, 1784 – August 30, 1835) was an American statesman and jurist. He served as Postmaster General for most of the administration of President Andrew Jackson, and was the only Cabinet member to not resign in 1831 as a result of the Petticoat Affair.

Born near Lunenburg, Virginia, he moved to Fayette County, Kentucky, in 1796 with his parents John Barry, an American Revolutionary War veteran, and Susannah (Dozier) Barry. He attended the common schools, Pisgah Academy and Kentucky Academy in Woodford County, Transylvania University at Lexington and graduated from the College of William & Mary at Williamsburg, Virginia in 1803, after which studied law and was admitted to the bar in 1805. He commenced practice at Jessamine County, Kentucky and then at Lexington. 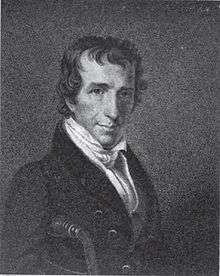 He was a member of Kentucky House of Representatives in 1807, a member of the U.S. House of Representatives from 1810 to 1811, served in the War of 1812, was a U.S. Senator from Kentucky, 1815 to 1816; then a member of the Kentucky Senate, 1817 to 1821, and the sixth Lieutenant Governor of Kentucky, 1820 to 1824, then Secretary of State of Kentucky, 1824 to 1825, and a candidate for Governor of Kentucky in 1828. During his time in the Kentucky Senate he wrote to former President James Madison seeking support for a plan of subsidizing public education across the state; Madison responded enthusiastically, including in his letter of August 4, 1822, the often cited observation that "A popular Government, without popular information or the means of acquiring it, is but a Prologue to a Farce or a Tragedy; or, perhaps both."[1]

He was U.S. Postmaster General in Andrew Jackson's administration from 1829 to 1835. He was the only member of Jackson's original Cabinet not to resign as a result of the Petticoat Affair, which involved the social ostracism of Margaret O'Neill Eaton, the wife of Secretary of War John H. Eaton by a coalition of Cabinet members wives led by Second Lady Floride Calhoun. Barry, like Jackson, had sided with the Eatons.[2]

He was appointed ambassador to Spain, but died en route to his post, while stopped in Liverpool, England August 30, 1835. He was originally interred and a cenotaph still stands at St. James's Cemetery, Liverpool, England; he was reinterred in 1854 at Frankfort Cemetery, Frankfort, Kentucky.

During the 1820s, Barry was a member of the prestigious society, Columbian Institute for the Promotion of Arts and Sciences, who counted among their members former presidents Andrew Jackson and John Quincy Adams and many prominent men of the day, including well-known representatives of the military, government service, medical and other professions.[5]

Barry was an uncle to Kentucky governor Luke P. Blackburn.[6]