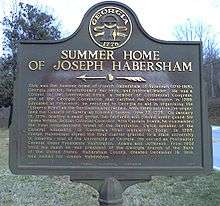 Joseph Habersham (July 28, 1751 – November 17, 1815) was an American businessman, Georgia politician, soldier in the Continental Army, and Postmaster General of the United States.

Born in Savannah, Georgia, to James Habersham and Mary Bolton, he attended preparatory schools and Princeton College and became successful merchant and planter. He was married to Isabella Rae, who was the sister-in-law of Col. Samuel Elbert.[1] They had one son, Robert Habersham.

He was a member of the council of safety and the Georgia Provincial Council in 1775 and a major of a battalion of Georgia militiamen and subsequently a colonel in the 1st Georgia Regiment of the Continental Army. He had to resign from the army after he served as Lachlan McIntosh's second in the controversial duel that killed Button Gwinnett.[2]

He and his brothers, James Jr. and John, were active in Georgia politics. Some older references state that Joseph was a delegate to the Confederation Congress in 1785, but this may stem from confusion with his brother John, who was a delegate at that time.[3] Joseph served as Speaker of the Georgia House in 1785 and was a member of the Georgia convention in 1788 that ratified the U.S. Constitution.[4]

He served as mayor of Savannah from 1792 to 1793 and then was appointed Postmaster General by President George Washington in 1795 and served until the beginning of Thomas Jefferson's administration in 1801. When Habersham created the office of first assistant postmaster-general in 1799, Abraham Bradley, Jr. was appointed to the office. In 1802, Bradley named one of his sons, Joseph Habersham Bradley (later a notable Washington, D.C. attorney), after his former superior.[5]

Habersham died in 1815. Habersham County[6] in Northeast Georgia, from its creation in 1818, is named in his honor, along with numerous sites and streets throughout the state.