Albert Sidney Burleson (June 7, 1863 – November 24, 1937) was a conservative Democrat[1] and United States Postmaster General and Congressman. He is known for gaining cabinet support for instituting racial segregation in the US Post Office, which President Woodrow Wilson applied to other federal agencies.

Born in San Marcos, Texas, Burleson came from a wealthy Southern planter family. His father, Edward Burleson, Jr., was a Confederate officer. His grandfather, Edward Burleson, was a soldier and statesman in the Republic of Texas and early statehood Texas. In his early political career, Burleson represented Texas in the House, where he was active in promoting the development of agriculture.

In 1913 Albert S. Burleson was appointed Postmaster General by Woodrow Wilson. To his credit, he initiated the parcel post and air mail services, increasing mail service to rural areas. However, Burleson was one of the most reactionary politicians to have served as Postmaster General, which he demonstrated in ways that adversely affected national mail service and the government's civil service system based on merit. His term is often seen as one of the worst in the history of the post.

At a cabinet meeting on April 11, 1913, just over one month into Wilson's first term his, Burleson "suggested that the new administration segregate the railway mail service," a suggestion Wilson adopted. He and other cabinet members also recommended segregated federal workplaces, which Wilson instituted, requiring separate lunchrooms and restrooms, and, in some cases, screened working areas. Since the Reconstruction era, the workplaces had been integrated and African Americans served in numerous positions in the merit civil service, as well as in some political appointee positions.[2] Wilson instituted racial discrimination in hiring, subverting the civil service merit system by requiring photos of applicants; many blacks were pushed down to the lowest grades and hiring declined.

Burleson persecuted African Americans in the mail service, segregating workers and firing black postal workers in the South. He drew criticism from labor unions by forbidding postal employees to strike. Burleson lived in this apartment/hotel on 16th Street NW while in Washington, D.C. 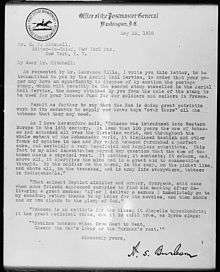 One of the first letters delivered by U.S. Airmail, written by Burleson

Business leaders were angered by inefficiency and almost dictatorial heavy-handedness in government control of communications. Soon after taking office in 1913, Burleson aroused a storm of protest, especially on the part of the large daily newspapers, by declaring that he would enforce the law (requiring publications to print, among other things, a sworn statement of paid circulation), which had been held in abeyance by his predecessor until its constitutionality might be confirmed. The Supreme Court enjoined him from doing this.[3]

After Europe was engaged in World War I, in 1915 Burleson issued an order barring envelopes and cards from the mails from the warring countries.[3] After the United States entered the war as a belligerent, Burleson vigorously enforced the Espionage Act, ordering local postmasters to send to him any illegal or suspicious material that they found. The distribution by mail of major radical pamphlets, such as Emma Goldman's Mother Earth and Max Eastman's The Masses, was slowed drastically, and often such pamphlets were never delivered. Burleson banned anti-war material from being delivered by USPO personnel. It was impossible to draw an ideal line and the result was a general alienation of the press.[3] From June 1918 until July 1919, the Post Office Department operated the nation's telephone and telegraph services,[4][5] an arrangement Burleson had advocated at least as early as 1913.[6]

Following the war, he continued to advocate permanent nationalization of telephone, telegraph and cable services. He acknowledged that Congress would be hostile to the idea, and oversaw the return of the communications infrastructure to its various corporate owners. He introduced the “zone system,” whereby postage on second-class mail was charged according to distance.[3] In 1919 he was appointed as chairman of the United States Telegraph and Telephone Administration and in 1920 as chairman of the United States Commission to the International Wire Communication Conference, retiring in 1921.

Burleson died of a heart attack and is buried in the Oakwood Cemetery in Austin, Texas.