Samuel Dexter (May 14, 1761 – May 4, 1816) was an early American statesman who served both in Congress and in the Presidential Cabinet.

Born in Boston, Massachusetts, to the Rev. Samuel Dexter, the 4th minister of Dedham, he graduated from Harvard University in 1781 and then studied law at Worcester under Levi Lincoln Sr., the future Attorney General of the United States. After he passed the bar in 1784, he began practicing in Lunenburg, Massachusetts.

During a House discussion on a Naturalization Bill in 1795, Virginia Representative William Branch Giles controversially suggested that all immigrants be forced to take an oath renouncing any titles of nobility they previously held. Dexter responded by questioning why Catholics were not required to denounce allegiance to the Pope, because priestcraft had initiated more problems throughout history than aristocracy. Dexter's points caused an infuriated James Madison to defend American Catholics, many of whom, such as Charles Carroll of Carrollton, had been good citizens during the American Revolution, and to point out that hereditary titles were barred under the Constitution in any event.[1]

In December 1799, he delivered the Senate eulogy for George Washington. Dexter served in the Senate for less than a year, and resigned in order to accept appointment as United States Secretary of War in the administration of President John Adams.

During his time at the War Department he urged congressional action to permit appointment and compensation of field officers for general staff duty. 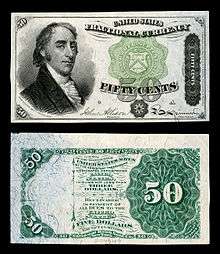 Dexter depicted on US fractional currency.

He returned to Boston in 1805 and resumed the practice of law. He left the Federalists and became a Democratic-Republican because he supported the War of 1812. He was an unsuccessful candidate for Governor of Massachusetts in 1814, 1815 and 1816.

Dexter was an ardent supporter of the temperance movement and presided over its first formal organization in Massachusetts. He was elected a Fellow of the American Academy of Arts and Sciences in 1800.[4]

He died on May 4, 1816, shortly before his 55th birthday and is buried at Mount Auburn Cemetery in Cambridge, Massachusetts.

Simon Newton Dexter and Andrew Dexter, Jr. were his nephews.

Samuel W. Dexter, founder of Dexter, Michigan, was his son.

Samuel Dexter is the namesake of Dexter, Maine.[5] The USRC Dexter (1830) was named in his honor.