Winton Malcolm Blount, Jr., known as Red Blount (February 1, 1921 – October 24, 2002), was the United States Postmaster General from January 22, 1969 to January 1, 1972. He founded and served as the Chief Executive Officer of the large construction company, Blount International, based in Montgomery, Alabama.

Blount was the last Postmaster General when the position was within the presidential Cabinet.

Born in Union Springs, Alabama, Blount served in the United States Army Air Corps during World War II, having trained as a B-29 pilot. However, the war ended before his training was completed.

In 1946, Blount and his brother William Houston Blount started a building contractor company, Blount Brothers. The company worked on such construction projects as the First Avenue Viaduct in Birmingham, the Louisiana Superdome in New Orleans, and Cape Canaveral's Complex 39A which launched Apollo 11 in Florida.

In 1964, Blount was appointed by U.S. President Lyndon B. Johnson to the National Citizens Committee for Community Relations to advise the White House on the enforcement of the new Civil Rights Act of 1964 even though Blount had expressed doubts about the new law.

In 1969, Blount was appointed as the Postmaster General by U.S. President Richard Nixon, and he supervised the transition in 1971 of the U.S. Post Office Department from a Cabinet-level department of the U.S. government to a special independent executive agency. He was thus the last Cabinet-level Postmaster General, and he served as the first director of the new U.S. Postal Service. Blount's assistant Postmaster General was James M. Henderson, an advertising executive from Greenville, South Carolina, who was the unsuccessful Republican candidate for Lieutenant Governor of South Carolina in 1970. Henderson persuaded the National Aeronautics and Space Administration and the Apollo 11 astronauts to photograph the Moon for an image on a postage stamp. More than 140 million moon stamps were sold.[1]

In 1972, Blount ran an unsuccessful campaign for the United States Senate. He easily won the Republican nomination in the first-ever GOP primary election held in Alabama. He defeated former U.S. Representative James D. Martin of Gadsden, 27,736 to 16,800. Another 6,674 votes were cast for two other candidates including State Representative Bert Nettles, an attorney then from Mobile who was considered a Moderate Republican. Martin had been the unsuccessful Republican gubernatorial nominee in 1966 against the late Lurleen Wallace.

Blount then faced in the general election the long-term incumbent Democrat, John Sparkman, who had been the 1952 Democratic candidate for vice president against Richard M. Nixon. From May 1972 to November 1972, future U.S. President George W. Bush transferred from the Texas Air National Guard to serve as the political director in Blount's campaign.

Blount attempted with little success to link Sparkman with Nixon's reelection opponent, U.S. Senator George S. McGovern of South Dakota. Alabama editor Ray Jenkins described the alleged McGovern-Sparkman connection as "just a little too much bull ... for the most unsophisticated Alabama voters, It was an insult to them in a way."[2] Despite his personal wealth, Blount could not match Sparkman's war chest, which was buoyed by nationwide contributions from business interests because Sparkman was chairman of the Senate Banking Committee. Nixon concentrated on his race against McGovern and hesitated to offend a leading Senate Democrat. Similarly, Nixon snubbed U.S. Representative Fletcher Thompson in neighboring Georgia, who was challenging the Democrat Sam Nunn, and Republican Gil Carmichael in Mississippi, the Republican opponent of veteran Senator James O. Eastland. When presidential press secretary Ron Ziegler was asked if Nixon supported Blount for the Senate, Ziegler replied, "Well, he doesn't oppose him." Vice President Spiro T. Agnew did campaign for Blount. The Democrats depicted Blount's wealth as a source of shame, not the fruits of a successful business. Alabama Governor George C. Wallace, a Sparkman supporter who after an assassination attempt had dropped out of the presidential nomination race, reportedly asked how Blount, who had "air-conditioned stables for his horses could be aware of the needs of the common man."[3]

The final results were Sparkman 654,491 (65.3 percent) to Blount's 347,52_ (34.7 percent). Blount carried only traditionally Republican Winston and Houston counties and lost his home county of Montgomery. Nixon received 728,701 votes (73.8 percent) in Alabama and carried all but six counties. He received more than twice as many votes as his former Postmaster General and outpolled his former vice-presidential rival, Sparkman, by some seventy thousand votes statewide.[4]

In 1973, Blount returned to Blount International, Inc., becoming its president once again in 1974. From 1981 to 1984 Blount, Inc., built the King Saud University in Riyadh, Saudi Arabia.

In 1980, Blount served as national chairman of the Texan John Connally's unsuccessful primary campaign, with the nomination being won by Ronald W. Reagan of California.

In 1996, the Greenwich Publishing Group published his autobiography called Doing It My Way, which he had co-written with Richard Blodgett.

In 1999, Blount International, Inc., was sold to Lehman Brothers company for $1.35 billion.

Blount died in Highlands, North Carolina, at the age of eighty-one. 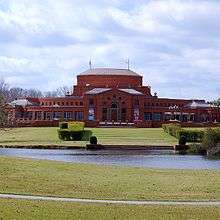 Blount and his wife Carolyn, were philanthropists and notable patrons of the arts. Together they founded the Blount Cultural Park[5] in Montgomery, which is home to the Montgomery Museum of Fine Arts and the Alabama Shakespeare Festival. The Blounts donated the land and a 100,000 square foot theater as the new home of the Alabama Shakespeare Festival in 1985. The cost was $21.5 million and at the time was the largest private donation to an American theater.

The Winton M. Blount Elementary School in Montgomery County, completed in 2003, is named in his honor. Located on the city's rapidly growing east side, it is one of the largest elementary schools in the region.

The Blount Undergraduate Initiative, a liberal arts honors program for Blount Scholars, was started at the University of Alabama. Blount Scholars reside in the Blount Living Learning Center on the campus.