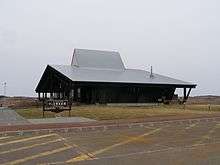 Kitami is in central Okhotsk Subprefecture. The Kitami Mountains are nearby. 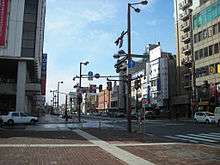 Kitami at one time exported mint (known as hakka locally), supplying 70% of the world's mint consumption.[2][3]

The city has strong associations with the sport of curling, inherited from the former town of Tokoro absorbed into the city in 2006. Interest in the sport grew following a friendship visit in 1980 by a curling team from Alberta in Canada.[9] An outdoor curling rink was built in Tokoro the following year, and it hosted the 1st NHK Cup Curling Championship.[9] In January 1988, the town built a dedicated 5-lane curling hall, the first in Japan.[10] This eventually closed in early 2013, replaced by a new, larger, all-year-round structure.[10]

Kitami has a humid continental climate with cold winters and relatively warm summers. The coldest month is January, with an average low of −14.7 °C (5.5 °F), and the warmest month is August, with an average high of 25 °C (77 °F) and a record high of 37 °C (99 °F). Kitami's inland location creates a larger temperature range than some coastal cities. Due to the mountains nearby, the Foehn wind effect occurs in summer when prevailing winds are from the southeast, so that Kitami often has the hottest temperatures in Hokkaido during this season and averages about 5 °C (9 °F) hotter than Kushiro. Traces of snow fall every day during the winter and cover is heavy, usually peaking at 0.82 metres (32.28 in), though Kitami still receives less overall precipitation than any other town in Japan as it is shielded from the heaviest moisture from both the Sea of Japan and Pacific Ocean.

The Hokkaido Kitami Bus Company has a number of inter-city as well as out-of-city routes.[13]

The JR Hokkaido Sekihoku Main Line that passes through Kitami reached the city on October 19, 1910 when the town was still called Notsukeushi. The largest station is Kitami Station, with Nishi-Kitami Station, Hakuyo Station, and Itoshino Station also located in Kitami.

The city is served by Memanbetsu Airport in the neighboring town of Ōzora.