This article is about the district. For its eponymous headquarters, see Thane.

Thane District ([ʈʰaːɳeˑ]) is a district in the Indian state of Maharashtra in Konkan Division. At the 2011 Census it was the most populated district in the nation, with 11,060,148 inhabitants;[1] however, in the district was split into two with the creation of a new Palghar district, leaving the reduced Thane district with a 2011 Census population of 8,070,032. The headquarters of the district is the city of Thane. Other major cities in the district are Navi Mumbai, Kalyan-Dombivli, Mira-Bhayander, Bhiwandi, Ulhasnagar, Ambarnath, Badlapur, Murbad and Shahapur. This is the third-most industrialised district in Maharashtra. 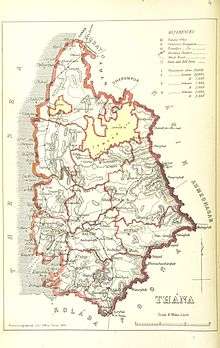 In 1817, the territory now comprising Thane district was taken over by the British from the Peshwa and it became a part of North Konkan district, with its headquarters in Thana. Since then, it has undergone considerable changes in its boundaries. In 1830, the North Konkan district was expanded by adding parts of South Konkan district and in 1833 was renamed Thana District. In 1853, the three sub-divisions of Pen, Roha and Mahad together with Underi and Revadanda agencies of Kolaba were formed into the sub-collectorate of Kolaba, under Thana, and ultimately were separated to become an independent Kolaba district in 1869 (now known as Raigad district).

After Independence, in 1949, the princely state of Jawhar was merged with Thana district and became a separate taluka. As many as twenty-seven villages and eight towns from Borivali taluka and one town and one village from Thana taluka were transferred to the Bombay Suburban district in 1956 when the limits of Greater Bombay were extended northwards in Salsette. In 1960, following the bifurcation of the bilingual Bombay State, 47 villages, and three towns in the taluka of Umbargaon were transferred to Surat district in Gujarat and its remaining twenty-seven villages were first included in Dahanu and later in 1961 made into a separate mahal, Talasari. In 1969, the taluka of Kalyan was divided into two talukas, Kalyan and Ulhasnagar.[2]

The district is the northernmost part of the Konkan lowlands of Maharashtra. It comprises the wide amphitheatre like Ulhas basin on the south and hilly Vaitama valley on the north together with plateaus and the slopes of Sahyadri. From the steep slopes of the Sahyadri in the east, the land falls through a succession of plateaus in the north and centre of the district to the Ulhas valley in the south. These lowlands are separated from the coast by a fairly well-defined narrow ridge of hills that runs north-south to the east of the Thane creek, parallel to the sea, keeping a distance of about 6 to 10 km from the shores. Isolated hills and spurs dot the district area.[3]

The two main rivers flowing through the district are the Ulhas and the Vaitarna. The Ulhas originates from the north of Tungarli near Lonavala, flows for a short distance before descending near Bhor ghat. It meets the sea at Vasai creek. Ulhas River is 135 km long. The river has many tributaries; two important of them (within the boundaries of this district) are Barvi and Bhatsa. Vaitarna, the largest of Konkan Rivers rises in the Tryambak hills in Nashik district, opposite to the source of Godavari, The river flows across Shahapur, Vada and Palghar talukas and enter the Arabian Sea through a wide estuary off Arnala. Vaitarna River is 154 km long and has a drainage area that practically covers the entire northern part of the district. It has a number of tributaries; the most important of them are Pinjal, Surya, Daherja and Tansa.

Many small creeks are found all along the western coast, in which tidal waters flood upstream and fill up much low ground. In many cases human interference has helped in converting them into mud flats. The bigger creeks are Bhiwandi, Chinchani, and Dahanu creeks. The Thane creek is not a creek in the true sense, but a depression engulfed by the sea.

The northern part of the Salsette Island is part of Thane district, which is separated from the mainland by the Ulhas estuary and the Thane creek but is connected through reclaimed land with the island city of Mumbai. Arnala Island is located in Vasai taluka, at the entrance to the Vaitarna estuary.

The district has no natural lakes. Artificial lakes have been constructed mainly to supply drinking water to Mumbai. The Tansa Lake formed across the Tansa River in the hills north of Bhiwandi behind the dam completed in 1892 CE. The Modak Sagar (Lower Vaitarna) Lake on the river Vaitarna formed behind a dam completed in 1957 CE. In the upper reaches of the same river, the Upper Vaitarana Lake formed behind another dam built in 1972 CE. The Bhatsa Lake has been formed in the upper Bhatsa, north of Shahapur behind a dam built in 1981 CE.[4]

Several hot springs are in the Vasai taluka in the bed of Tansa River. They are near Akloli, Ganeshpuri and Vajreshwari villages. There are some more examples: Kokner (Maswan tal-Palghar) and Sativali (Saphale tal:-Palghar). The water temperatures are in the range of 42°-55 °C.[3]

The district has four seasons. Winter is from December to February, followed by summer from March to June. The southwest monsoon season is from June to September. October and November months constitute the post-monsoon season, which is hot and humid in the coastal areas.

See also: List of villages and towns in Thane District

Thane district comprises 7 talukas (administrative divisions), with Thane being its headquarters. The talukas, with their populations at the 2001 and 2011 Censuses[6] are as follows

In June 2014, the State Cabinet approved the bifurcation of the district into two districts - Thane and Palghar. The new Palghar district comprises the seven talukas which it had been proposed to comprise in the putative Jawhar District, with the addition of Vasai taluka. The effective date for bifurcation was 1 August 2014.[8]

Western coastal region is mostly populated by Kolis, the northern and the eastern talukas are populated by the Varlis, known for making stark images from red mud on house walls.

Thane is the third most industrialised district in the State. There are 1548 large and medium scale and 18,480 small scale industries in the district. The main products of these industries are Drugs, Textiles, Adhesives, Plastics, Rubber, Steel, Pharmaceuticals, Engineering, Fertilizers, Electronics, Chemicals and Iron & Steel. The Thane-Belapur-Kalyan industrial belt is the centre of highly sophisticated modern industries. In Ulhasnagar, Ambarnath, Bhiwandi, Badlapur, Tarapur, Palghar, Vasai and Murbad there are nearly 4000 industries which contributes towards the industrialisation of the district. Manufacture of machinery, machine tools and parts except electrical machinery together with the iron and steel industry and metal products are the most important and the biggest group of industries in the district and includes manufacture of Prime movers, Boilers, Refrigerators, Machine Tools, Computing and Accounting machinery, Industrial machinery for food and textile industries, machinery for chemicals, paper and cement industries. Manufacture of basic industrial chemicals including fertilizers, vegetable and animal oils and fats, paints, varnishes and lacquers and other miscellaneous chemical products is another important industry in the district. These industries are mainly concentrated in the Trans-Thane Creek and Belapur Road industrial area. The medium and large industries manufacturing chemicals and chemical products are Pfizer, Lubrizol India Ltd., Polyolefins Industries Ltd., NOCIL, Herdillia Chemicals Ltd., BASF (India) Ltd., Star Chemicals, INDOFIL INDUSTRIES LIMITED, and Phoenix Chemical Works. The chemical industries are also found in other parts of the district like Wagle Industrial Estate, Pokhran Road, Ambarnath and Dombivli. The cotton and non-cotton power looms are mainly located at Bhiwandi, Thane and Kalyan. Traditionally, Bhiwandi is famous for its handlooms. But the deteriorating markets for the handlooms compelled the weavers to replace their handlooms by powerlooms. Fisheries constitute an important industry in Thane district. It is carried out in sea as well as in creeks and estuaries on the western coast. Marine fishery predominates over inland fishery in the district and provides employment to about 75% of the persons engaged in the fishing industry. Fishing in sea is carried out along the coast stretching over about 110 km. The important fishing centres in the district are Dahanu, Pokharan-Uchheli, Nawapur, Murabe, Satpute, Datiware, Arnala, Vasai and Uran. Food processing industries like grain mill products, Bakery products, Cocoa, Chocolate and Sugar Confectionery, Salt, ice, slaughtering, preparation and preservation of meat, dairy products, canning and preservation of fruits and vegetables, canning, preserving and processing of fish are developed in the district. Raptakos, Brett and Co., Pfizer Ltd., Cadbury Fry (India) Ltd. which produce modified milk food and high protein food are some of the large and medium companies in the district. Wood products like plywood and veneer, wooden boxes, barrels, bamboo, cane baskets, bobbins, industrial fixtures, cork & cork products are also manufactured in the district. The Tarapur Atomic Power Station which has ushered an era of utilisation of nuclear energy for electricity generation is also situated in the district. The finance is being provided by various public sector and private sector Banks and Financial Institutions in the district. Bank of Maharashtra is one of the leading Public Sector Banks of the district, having 60 branches (2000 CE).[15]

The total railway track length in the district is 345.73 km. spread in western and central part of the district. The Western Railway network passes through Vasai, Palghar and Dahanu talukas of the district and Central railway network passes through Thane, Kalyan, Ulhasnagar and Shahapur talukas of the district. Western Railway local trains leaving from Churchgate railway station go up to Dahanu Road railway station in the district. Central Railway local trains leaving from Chhatrapati Shivaji Terminus go up to Kalyan, ULHASNAGAR Ambarnath, Badlapur, Karjat and Kasara. In 1994, a new connection made from Diva Junction to Vasai. This connection joined Central Railway and Western Railway networks and its length is 41.96 km.[15] Konkan Railway network also passes through a part of the district. Local trains have now started plying from Chhatrapati Shivaji Terminus, Mumbai to Panvel on this network. Dahanu, Satpati, Mahim. Kalyan, Vasai, and Uttan are the ports on the Arabian Sea coast. Ferry services are available between these ports. Metered Auto Rickshaws ply in Thane, Mira-Bhyander and several other towns. Metered Taxi services are also available in Thane, Mira-Bhayandar and some other towns.

At present, this district has no airport.but future planning.

A significant stadium in this district, Dadoji Konddev Sports Stadium, is located in Thane city, where various sports like cricket, badminton, tennis and table tennis are played.