Some of the structures of "The Homeplace".

Aerial view of Kentucky Lake and Lake Barkley, with the Land Between the Lakes at the lower left

The Land Between The Lakes National Recreation Area is a United States National Recreation Area located in Kentucky and Tennessee between Lake Barkley and Kentucky Lake. The area was designated a national recreation area by President John F. Kennedy in 1963. The recreation area was originally managed by the Tennessee Valley Authority but jurisdiction has since been transferred to the United States Forest Service. It was designated as a UNESCO Biosphere reserve in 1991.[1]

The Tennessee and Cumberland Rivers flow very close to each other in the northwestern corner of Middle Tennessee and Western Kentucky, separated by a rather narrow and mostly low ridge. The area of land that separates the two bodies of water by only a few miles became known as "Between the Rivers" since at least the 1830s or 1840s. After the Cumberland River was impounded in the 1960s and a canal was constructed between the two lakes, Land Between the Lakes became the largest inland peninsula in the United States. Downstream from this area, the courses of the two rivers diverge again, with the mouth of the Cumberland emptying into the Ohio River approximately 4 mi (7 km) from that of the Tennessee.

Government first began to have a major impact on the area when the Confederate government built Fort Henry on the banks of the Tennessee, ostensibly to protect the upper reaches of that river from Union gunboats; initially, Kentucky had declared its neutrality in the American Civil War. When Fort Henry fell in early 1862, there was little more Civil War action in the area, which was judged to be too devoid of valuable war resources to deserve much attention from either side, and it went back to its somewhat isolated ways. The next major event in the area, other than calls for men to fight in the Spanish–American War and World War I, was the formation of the Tennessee Valley Authority as part of President Franklin Delano Roosevelt's New Deal. The site of the last dam downstream on the Tennessee was to be Gilbertsville, Kentucky. The resulting impoundment, completed in the early 1940s, Kentucky Lake, flooded some of the low-lying land on the western side of the area, resulting in the condemnation of land and the forced removal of some area farmers. This was very unpopular with some of those affected, while others seemed happy to get an opportunity to sell their land and start a new life in a less remote area.[2]

A plan was developed shortly after this to use the United States Army Corps of Engineers to dam the Cumberland in such a way that the two lakes would be at the same elevation, and the two streams could then be connected by a canal without the need for any locks. This would considerably lessen the shipping distances for goods going to ports on the Gulf of Mexico for products leaving the Cumberland Valley. This was completed in the 1960s and the resulting impoundment was referred to as Lake Barkley, after Alben W. Barkley, a Kentuckian who had served as Vice President under President Harry S. Truman. The plan called for a new dam and the evacuation of the entire former "Between the Rivers" area, not all of which was to be flooded. The area was to become Land Between the Lakes National Recreation Area – a TVA experiment designed to show a multiple-use approach to recreational lands. Unlike a national park, there were to be areas where hunting would be allowed. Over time, many other attractions were to be developed, such as a bison range, and a recreated 1850-style farm called "The Homeplace", complete with an on-site staff simulating life on the farm in period costume and working it using period agricultural techniques. (Both of these attractions were added in the 1970s.) The road through the Tennessee portion was renamed from State Route 49 to "The Trace", which is what many roads and paths were called in pioneer times (it is short for "Buffalo Trace" that many winding roads have been called since they seem to follow the winding path of buffalo or bison). 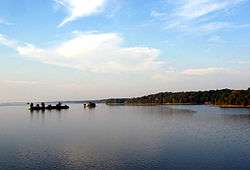 Many area residents resented the condemnation of their lands, especially when it was explained to them that most of the area was not to be flooded but rather to become a park. The former settlements of Tharpe, Tennessee; Model, Tennessee; and Golden Pond, Kentucky, were forcibly abandoned. The remains of a former iron furnace, manned in the 1850s by slave labor, are about all that remains of Model. Golden Pond was replaced by the headquarters of the area and retained as the postal address for it. There is a museum, a planetarium, and an environmental education area there.

The area has many miles of hiking trails, many boat ramps, an off-road vehicle area, many campgrounds, and group lodges and a few cabins; most attractions require a user fee.

The 700-acre (280 ha) "Elk & Bison Prairie" enclosure was developed beginning in the 1970s with prescribed burns to encourage the expansion of the remnant patches of native prairie which had been crowded out by oak and hickory forests over the previous 150 years due to a lack of fire or grazing animals. The area was regularly burned and reseeded with grasses, and then elk (from Elk Island National Park of Canada) and bison were added to the landscape.[3][4] In 1996 the "Elk & Bison Prairie" was officially inaugurated and is now open to driving tours where visitors see a typical 18th century landscape.[5]

In the 1990s, the directors of the TVA decided to get out of most activities requiring direct taxpayer funding. In 1998, the TVA transferred operation of the area to the U.S. Forest Service of the United States Department of Agriculture.