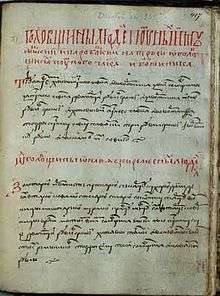 The First Statute of Lithuania, 1529

The Lithuanian law has a long history. The origins are traced back to the first written source, the Casimir Code (Lithuanian: Kazimiero teisynas), published in 1468 by the Grand Duke of Lithuania Casimir Jagiellon with the Lithuanian Council of Lords. It is considered to be the first codified law of the Grand Duchy of Lithuania. Statutes of Lithuania, published three times (in 1529, 1566 and 1588) were the most influent legal codes of Lithuania. The third variant of the Statute was in force in the territory of Lithuania until 1840 when it got replaced by the Russian laws. However, under the rule of the Russian Empire, there were three separate civil law systems in force in Lithuania: in Suvalkija the Napoleonic Code was still applied, whereas the German law was in force in Klaipėda Region.

The legal system of independent Lithuania between the World Wars was influenced by the fact that three separate systems of civil law governed various parts of the country, while the autonomous Klaipėda Region had its own legal instruments. The notable difference from the rest of the state was the possibility of a secular civil marriage in the 1930s and 1940s. The drafting of Lithuanian legal codes went on for decades and was not completed until World War II. During the Soviet occupation the adapted law of the USSR was in force in Lithuania.

After regaining of independence in 1990, the largely modified Soviet legal codes were in force for about a decade. The modern Constitution of Lithuania was adopted on 25 October 1992. In 2001 the Civil Code of Lithuania was passed in Seimas. It was succeeded by the Criminal Code and Criminal Procedure Code in 2003. The approach to the criminal law is inquisitorial, as opposed to adversarial; it is generally characterised by an insistence on formality and rationalisation, as opposed to practicality and informality.

The European Union law is an integral part of the Lithuanian legal system since 1 May 2004.

The civil law and commercial law is codified in a single legal act - the Civil Code of the Republic of Lithuania (Lithuanian: Lietuvos Respublikos civilinis kodeksas) which is in force since 1 July 2001. It is influenced by the civil codes of Quebec and the Netherlands. The commercial law in Lithuania is of an increasingly excellent drafting quality and the market in Lithuanian legal services is now increasingly competitive.

Legal professionals are prepared and the law is researched in departments of three universities of Lithuania: