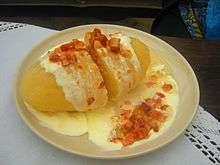 Lithuanian cuisine features products suited to the cool and moist northern climate of Lithuania: barley, potatoes, rye, beets, greens, berries, and mushrooms are locally grown, and dairy products are one of its specialties. Since it shares its climate and agricultural practices with Northern Europe, Lithuanian cuisine has much in common with its Baltic neighbors and, in general, northern countries. It also shares some traditions with Polish and Ukrainian that date back to the grand duchy times. Also, Hungarian, German, and Georgian cuisines as well as Ashkenazi cuisine. Nevertheless, it has its own distinguishing features, which were formed by a variety of influences during the country's long, difficult and interesting history.

German traditions have had a big influence on Lithuanian cuisine, introducing pork and potato dishes, such as potato pudding (kugelis or kugel) and intestines stuffed with mashed potato (vėdarai), as well as the baroque tree cake known as Šakotis. Because of their common heritage, Lithuanians, Poles, and Ashkenazi Jews also share some dishes and beverages. Thus there are similar Lithuanian, Lithuanian Jewish, and Polish versions of dumplings (koldūnai, kreplach or pierogi), doughnuts spurgos or (pączki ), and blynai crepes (blintzes). The most exotic of all the influences is Eastern (Karaite) cuisine, and the dishes kibinai and čeburekai are popular in Lithuania. Torte Napoleon was introduced during Napoleon's passage through Lithuania in the 19th century.

Despite the apparent richness of the cuisine, Lithuania has a very low prevalence of obesity.[1] 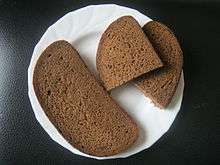 Traditionally, the centerpiece of Lithuanian cuisine is dark rye bread (ruginė duona) which is used substantially more often than light wheat breads. The dough is usually based on a sourdough starter, and includes some wheat flour to lighten the finished product. Rye bread is often eaten as an open-faced sandwich, buttered or spread with cheese . It is sometimes flavored with caraway, or with some onion.

Some varieties of Lithuanian bread contain whole seeds of rye and wheat; this type of bread is referred to as grūdėtoji, i.e. "seeded" bread.

The most commonly used vegetable in Lithuanian recipes is the potato; in its simplest forms, it is boiled, baked, or sauteed, often garnished with dill, but a tremendous variety of potato recipes exist. Potatoes were introduced into Lithuania in the late 18th century, were found to prosper in its climate, and soon became indispensable.

Cucumbers, dill pickles, radishes and greens are quite popular. Beets (burokai) are grown more widely than in other areas of the world, and are often used for making borscht and side dishes. Cabbage is another popular vegetable, used as a basis for soups, or wrapped around fillings (balandėliai). Tomatoes are now available year-round in stores, but those home-grown in family greenhouses are still considered superior.

Lithuanian herbs and seasonings include mustard seed, dill (krapai), caraway seed (kmynai), garlic, bay leaf, juniper berries, and fruit essences. Vanilla and pepper were scarce during the Soviet era, but were welcomed back after independence. The cuisine is relatively mild. 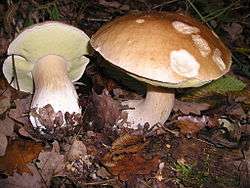 Boletus, the "King of Mushrooms"

One of the prides of Lithuanian cuisine is its wide use of wild berries and mushrooms.

Mushrooming is a popular pastime from mid-summer to autumn. As a staple, mushrooms are usually harvested in the forest; occasionally they are purchased at roadside markets, especially on the road in the Dzūkija region from Druskininkai to Vilnius; the purchasing of mushrooms in shops is rare. Despite its status as a delicacy, mushrooms are thought of by many Lithuanians as hard to digest. A number of mushroom species are harvested from the wild, including:

Baravykas is the most valued and sought-after species; the primary usages are drying and marinating. Dried baravykas has a strong pleasant scent and is used as seasoning in soups and sauces. Voveraitė is often used fresh as a seasoning in soups or sauteed. Most common dish of this mushroom is voveraitė sauteed with chopped bulb onions and potatoes. Gudukas, arguably the most locally abundant of edible mushrooms due to its lower popularity, is usually marinated. Other edible mushrooms, such as lepšė (Leccinum scabrum), raudonviršis or raudonikis (literally, "red-topped") (Leccinum aurantiacum), makavykas (Suillus variegatus), šilbaravykis (Xerocomus badius), are more rare, but are also gathered and may be used in the same ways as baravykas.

Wild berries are also gathered or, even more frequently than mushrooms, purchased at roadside markets or shops. Bilberries (mėlynės) and lingonberries (bruknės) are the two most abundant species of wild berries. Cranberries (spanguolės) are valued, but their cultivation is limited to certain boggy areas, such as those adjacent to Čepkeliai Marsh. Sour cranberry or lingonberry jam and sweet bilberry jam are all considered excellent sauces for pancakes (blynai). Lingonberry jam is occasionally used as a dressing for fried chicken or turkey or as a sauce for other savory dishes. Fresh bilberries may be put into a cold milk soup. Wild strawberries (žemuogės) are relatively scarce and are usually gathered for immediate consumption.

Apples, plums, and pears, which grow well in Lithuania, are the most commonly used fruit. Because they cannot tolerate frost, tropical fruit such as citrus, bananas, and pineapples must be imported, and hence were used less often in the past; however, these fruits are now becoming more typical and are widely consumed. During the autumn harvest, fruit is often simmered and spiced to create fruit stews (kompots). Gooseberries (agrastai) and currants (serbentai) are widely cultivated; they are sweetened, made into jams and baked goods, and provide a piquant touch to desserts.

The most frequently used meat is pork, followed by beef, lamb, chicken, rabbit, duck and goose; for immediate consumption it is often grilled, or dusted with breadcrumbs and sauteed, in a dish similar to schnitzel. For bigger gatherings, oven roasts are prepared. The need for meat preservation no longer presents the urgency that it did during the Soviet occupation or previous times of trouble, but many favorite techniques survive, include brining, salting, drying and smoking. There are many varieties of smoked pork, including ham and a soft sausage with a large-grained filling; these are served as a main course or thinly sliced in sandwiches.

Fish, such as pike or perch, are often baked whole or stuffed, or made into gefilte fish. Herring is marinated, baked, fried, or served in aspic.

Smoked fish such as eel or bream are popular entrees and appetizers in areas near the Baltic Sea, especially in Neringa.

Crayfish are also popular and are usually eaten in the summertime.

Dairy products play an important role in Lithuanian cuisine; curd cheese (similar to cottage cheese) may be sweet, sour, seasoned with caraway, fresh, or cured until semi-soft. The most popular way of eating Lithuanian non-fermented white cheese is with fresh honey; it can also be cooked with spices and enjoyed with tea. Lithuanian butters and cream are unusually rich. Sour cream is so prominent in Lithuanian cuisine, that it is eaten with everything - meat, fish, pancakes, soups, desserts, salads and so on. Lithuanian curd snacks called sūreliai are popular too. Also, a big variety of different soured milk products are available in the supermarkets, though many people still prefer making their own soured milk.

Soups are extremely popular, and are widely regarded as the key to good health. 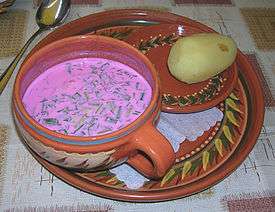 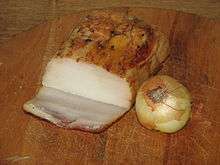 A small slab of lašiniai with an onion 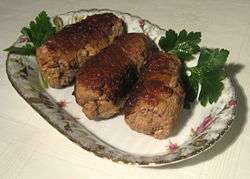 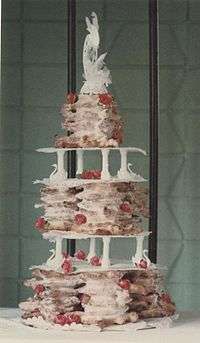 Šakotis dressed up for a wedding 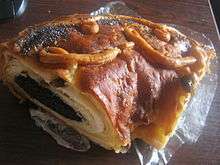 One of the Lithuanian poppy seed cakes - Šimtalapis. 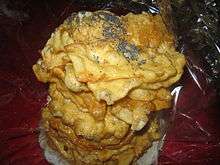 Lithuanian-style cakes (pyragas) are often baked in a rectangular pan and sometimes have apple, plum, apricot, or other fruit baked in; they are less frequently iced than is customary in the United States. These cakes are cut into squares for serving. Poppy seed is sometimes used as a swirl filling in dessert bread (Poppy seed roll and šimtalapis) and as a flavoring in other pastries.

For special occasions, torte may be prepared; they often consist of 10 to 20 layers, filled with jam and vanilla, chocolate, mocha, or rum buttercreams; they are lavishly decorated. Lithuanian coffeehouses (kavinė) serve a variety of tortes and pastries to attract evening strollers.

Lithuania is not very well known for its beer, but it is one of the few countries in Europe to have an independent beer tradition in which breweries do not simply brew beers in styles developed elsewhere. Traditional farmhouse brewing has survived into the present day in Lithuania, and during Soviet times such brewing started to be expanded to a larger scale. After independence this process gathered speed, and soon there were more than 200 breweries in the country. Many of these have since gone out of business, but Lithuania still has about 80 breweries, of which perhaps 60-70 produce beers in styles unknown in the rest of the world. Some of these are very close to the traditional brews made by farmers, while others have developed out of that tradition as a consequence of the growth of the traditional brewers into reasonably large regional breweries.

The microbrewery scene in Lithuania has been growing in later years, with a number of bars focusing on these beers popping up in Vilnius and also in other parts of the country. Locals beers have started to attract international attention after beer bloggers discovered the country, inspiring a major feature article in Beer Connoiseur magazine, prompting the New York Times to list Lithuania as one of the 42 places to visit in 2013 on the strength of the village beers. 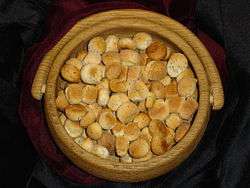