For other uses, see Liga (disambiguation).

Liga I (also spelled Liga 1) is the Romanian professional league for men's association football clubs. It is currently sponsored by Orange and thus officially known as the Liga 1 Orange.[1] At the top of the Romanian football league system, it is the country's primary football competition. Contested by 14 clubs, it operates on a system of promotion and relegation with Liga II. Liga I was established in 1909 and commenced play for the 1909–10 campaign, and is currently ranked 15th in UEFA's league coefficient ranking list. It is part of the Romanian Professional Football League (LPF). Before the 2006–07 season, it was named Divizia A, but the name had to be changed following the discovery that someone else had registered this trademark.[2]

Liga I clubs rank first in the number of teams that have played in European competitions since 1955 to present. No less than 40 clubs have played at least one match in European Cups.[3]

The first football club's organization formula was "A Divisional College" (Colegiul Divizionar A) founded on 5 October 1970 and led by Mircea Angelescu. Until 1990, the "A Divisional College" was formal without remarkable decisions. During the 90's many changes were implemented, reflected in the new names of the organization, e.g. "A Divisional Team's League", " National Football League", "Professional Club's League", etc. On 10 October 1992, the organization's name became "Professional Football A Division League", led by Mircea Angelescu as president, Dumitru Dragomir as vice-president and Daniel Lăzărescu as general secretary. On 22 January 1993, the name of the organization became "Professional Football League of Romania", an A-Division professional football clubs representation. On 13 October 1993, the Liga II - or B Division - club's members were included. On 30 September 1996, Dumitru Dragomir has been elected president of the "Professional Football League of Romania". The headquarters has been located on 47 Mihai Eminescu Street since February 1997. In December 1977, it was decided that the league would organize the A-Division Championship starting with the 1997–98 championship.

In November 2013, Gino Iorgulescu was elected as the new president of the Romanian Professional Football League, replacing Dumitru Dragomir, who had been president of the league since 1996.[4]

There are currently 18 teams at this level, of which the bottom four are relegated at the season's end. These teams are replaced by the champions of the two divisions that make up Liga II, the second level of the Romanian football league system.

The most successful teams over the years have been Steaua București (26 titles) and Dinamo București (18 titles). Other notable teams include UTA Arad (6 titles), Universitatea Craiova and Petrolul Ploiești (4 titles) and Rapid București and CFR Cluj with three titles each. CFR Cluj was the first team from outside of Bucharest to win the championship (in the 2007–08 season) since the 1990–91 season, starting a five-year period of non-Bucharest champions (CFR Cluj with three titles, Unirea Urziceni and Oțelul Galați with one title each). Teams such as Politehnica Timișoara, FC Vaslui or Unirea Urziceni managed good classifications, in front of the Bucharest teams, who have begun to fade since then.

Since the 2012–13 season, Steaua București has become the best performing team with three consecutive titles, as well as good results in the continental competitions.

On 19 December 1998, SABMiller bought the naming rights for four and a half seasons, becoming the first sponsor in the history of the competition. SABMiller changed the name of the competition to "Divizia A Ursus", in order to promote their Ursus beer.[5]

Starting with the 2004–05 season, European Drinks & Foods, a Romanian $1.3 billion USD revenue company, took over as main sponsor and changed the league's name to "Divizia A Bürger", to promote their Bürger beer.[6]

On 11 May 2008, Realitatea Media bought the naming rights and changed the name of the competition to "Liga I Realitatea", to promote their Realitatea TV station.[7]

In late 2008, European Drinks & Foods again bought the rights and the league was renamed as the "Liga I Frutti Fresh", after one of their soft drinks brand.[8]

For the 2009–10 season, the online betting firm Gamebookers purchased the league naming rights and renamed the division "Liga 1 Gamebookers.com".[9]

In July 2010, Bergenbier, a StarBev Group company, bought the naming rights for four seasons and changed the name of the competition to "Liga I Bergenbier", in order to promote their Bergenbier beer.[10]

From the 2015-16 season, the French telecommunications corporation Orange became the main sponsor of the Romanian first league, after purchasing the league naming rights, for two years, and renamed the league in Liga 1 Orange.[11]

On 31 March 2008, Antena 1 with RCS & RDS outbid Realitatea Media and Kanal D in the broadcasting rights auction with a bid of €102 million for a three seasons contract.[12]

In 2011, the broadcasting rights were bought by RCS & RDS for their channels Digi Sport 1, Digi Sport 2 and Digi Sport 3. This channels aired broadcasting of seven of the nine matches from each stage of the championship. The other two matches were broadcast by Antena 1 (an Intact Media Group channel) and Dolce Sport (a channel owned by Telekom Romania).

In March 2014, LPF announced that the rights were sold for a five-year period to a company from the European Union, without specifying the company's name.[13] A month later, Look TV and Transilvania LIVE were revealed as the TV stations that would broadcast the games from Liga I and Cupa Ligii between 2014 and 2019.[14]

The teams in Bold play in the 2016–17 season of Liga I. The teams in Italics no longer exist. The teams in neither bold or italics are existing past winners of the championship that relegated to Romania's lower leagues.

The following table lists the Romanian champions by cities.[15][16]

The ranking is computed awarding two points for a win, one for a draw. It includes matches played between 1932–33 and 2015–16 season inclusive, some games awarded 3–0 but without play-off or play-out games. The teams in bold play in the 2016–17 season of Liga I. The teams in italics no longer exist.[17] 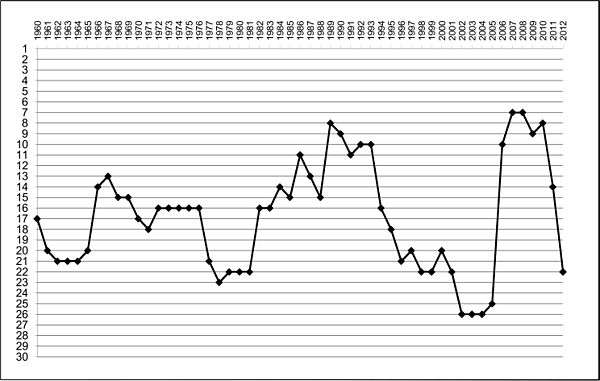 From the quarter-finals onwards.