The Nemzeti Bajnokság (Hungarian pronunciation: [ˈnɛmzɛti ˈbɒjnokʃaːɡ], "National Championship") is the Hungarian professional league for association football clubs. The league is currently known as the OTP Bank Liga for sponsorship reasons,[1] and it is the highest level of professional league since its inception in 1901. UEFA currently ranks the league 29th in Europe.[2]

Twelve teams compete in the league, playing each other twice, once at home and once away. At the end of the season, the top team enters the qualification for the UEFA Champions League, while the runner-up and the third placed, together with the winner of the Hungarian Cup enters the UEFA Europa League qualification round. The bottom two clubs are relegated to Nemzeti Bajnokság II, the second-level league, to be replaced by the winner and the runner up of the NB2.

In the 1930s, the rivalry between Ferencváros and MTK Budapest expanded with another club, Újpest FC (at that time not part of Budapest).[8] One of the most iconic figure of the 1930s Hungarian football was Újpest's Zsengellér who managed to top goalscorer three times in a row in the 1930s.[9] Ferencváros's Sárosi[10] and MTK Budapest's Cseh[11] and Újpest's Zsengellér were the embodiment of the rivalry of the three clubs from Budapest, named Budapest derby.[12]

In the 1940s, Csepel could win its first title which was followed by two other titles in 1942 and 1943.[13] During the World War II there were no interruptions in the Hungarian league. Due to the expansion of the territories of the country, new clubs could re-join the league such as Nagyvárad[14] and Kolozsvár.[15] The second half of the 1940s was dominated by Újpest by winning the championship in 1945, 1946 and 1947.[16] 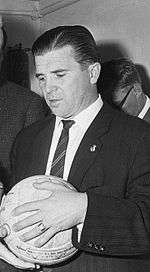 In the 1950s, the dominance of Ferencváros and MTK weakened by the emergence of Honvéd with players such as Puskás,[17] Bozsik,[18] Czibor[19] and Budai.[20] Later these players played in the final of the 1954 FIFA World Cup. In the 1950s, Honvéd could win the championship five times. During the early 1950s, Honvéd players formed the backbone of the legendary Mighty Magyars. In 1956 the Hungarian league was suspended due to the Hungarian Revolution. The league was led by Honvéd after 21 rounds but the championship has never been finished.[21] In the first season (1955-56) of the European Cup, MTK Budapest reached the quarter-finals while in the 1957-58 season Vasas Budapest played in the semi-finals of the European Cup.

In the 1960s, the rivalry between the clubs from Budapest expanded with Vasas. Vasas could win four titles in the 1960s (1961, 1962, 1965 and 1966). Ferencváros was led by Albert who became top goal scorer in 1965 and also was named European Footballer of the Year in 1967. The 1960s can be considered as the most successful period of the Hungarian clubs on international turf. In 1965 Ferencváros became the most successful team of the Hungarian League in the European competitions having won the 1964-65 Inter-Cities Fairs Cup. In addition, Albert was named European Footballer of the Year in 1967. He is the most successful Ferencváros since the formation of the club, scoring 255 goals in 351 matches from 1958–74.[22] 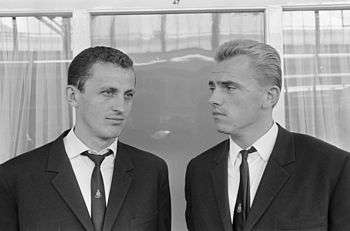 Ferencváros legend Albert with Vasas legend Mészöly in the 1970s

The 1970s is associated with Baróti's Újpest since the club could win seven titles. In the 1973-74 European Cup season Újpest reached the semi-finals where Bayern Munich stopped their campaign. The key of the Magic Újpest was famous forward formation of Fazekas, Göröcs, Bene, Dunai II, Zámbó. Bene became the leader of Újpest and also top goalscorer three times in the 1970s. He also led the Hungarian national football team to win the 1964 Summer Olympics in Tokyo, Japan. Újpest set new post-war records by scoring 500 goals in the seven seasons or losing only 4 home matches in 10 seasons. Törőcsik and Fekete joined Újpest after Göröcs, Bene and Dunai left the team. In 1978 and 1979 they won the Hungarian title again with former player Várhidi as the head coach. The Újpest fans called Törökcsik (or Törö) as the 'magician' since he was able to make unbelieveble dribbles, unexpected assists to teammates. László Fekete won the European Silver shoe.[23]

In 1982 Győr won the championship becoming the first non-Budapest team who could win the Hungarian league (except Nagyvárad during the World War II). Győr could repeat the triumph in the following year in 1983. However, the 1980s was dominated by Honvéd who celebrated its second heyday during the 1980s.[24]

Due to the collapse of the Communist era the Hungarian football clubs lost the support of the state. Therefore, many clubs faced with financial problems which effects are still present in the Hungarian football. However, the 1990s were still dominated by the 'traditional' clubs of the championships such Ferencváros, MTK, Újpest. Frencváros finished always in the top three, except for the 1993–94 season, when they finished 4th. The financial problems affected the performance of the clubs outside the Hungarian League as well. Hungarian clubs could not compete with the European counterparts. Moreover, the Bosman ruling also had a deep impact on the Hungarian League. Since big European clubs could invest loads of money into football, clubs from the Eastern Bloc were restricted to employ only home nationals.[25]

The league went through various name changes depending on the sponsor for the given season(s):

Below is a ranking of the clubs by most titles won.[42]

The rivalry between Ferencváros and MTK Budapest, also known as Örökrangadó, has the longest history in Hungarian football. The two clubs have been competing for the Nemzeti Bajnokság title since the inception of the Hungarian League. From the 1930s, the rivalry between Ferencváros and Újpest started. Their rivalry rooted in the town-village contrast, Ferencváros representing the city-dwellers while Újpest the villagers. However, from the 1950s this distinction was not present due to the fact that Újpest became part of Budapest.

Top scorer in a season

Note: Active footballers are in bold.

One of the most notable players of the Hungarian League was Ferenc Puskás who played for Budapest Honvéd. He played for Honvéd from 1943 to 1955 and then for Real Madrid. He made his first senior appearance for Kispest in November 1943 in a match against Nagyváradi AC.[54]

Among the most well-known foreign players is the three-time Serie A top goal scorer Giuseppe Signori who played for FC Sopron scoring three goals in 10 matches in the 2005−06 season. He retired from the Western-Hungarian club in 2006.[55]