The Ekstraklasa (Polish pronunciation: [ˌɛkstraˈklasa]), since 2016 Lotto Ekstraklasa is a Polish professional league for association football clubs. At the top of the Polish football league system, it is the country's primary football competition. It is contested by 16 clubs, operating a system of promotion and relegation with the I liga. The Ekstraklasa season starts in late July, and ends in May or June the following year, teams play a total of 37 games each.

The Ekstraklasa (former I liga) was officially formed as Liga Piłki Nożnej (Polish pronunciation: [ˈlʲiɡa ˈpiwki ˈnɔʐnɛj]; LPN) on 1 March 1927 in Warsaw, but Polish Championships and the Polish Football Federation PZPN (Polski Związek Piłki Nożnej) had been in existence since 20 December 1919, a year after the independence of Poland in 1918. The first games of the freshly created league took place on 3 April 1927, while first national non-league football championship took place in 1921. First, historic champion of the newly restored Second Polish Republic was Cracovia, after which Pogon Lwow was the champion in 1922, 1923, 1925 and 1926.

A total of 80 clubs have played in the top division of Polish football since the founding of the league, of which 16 clubs have won the title. The current champions are Legia Warsaw, who won their eleventh title in 2015–16.

Creation of the Polish Football League

In December 1926 in Warsaw, representatives from several Polish clubs met each other. The purpose of this meeting was to discuss about possibility of creating a league. It is unknown who came up with the idea of a league. A country wide league was thought to be a much more practical solution than hitherto practiced two-stage system of regional games, followed by a national game.

To dismay of clubs' officials, PZPN did not like the idea of a league and the Association wanted to thwart it. However, it turned out that virtually all but one of the Polish clubs supported the idea. The decision to create it was made regardless of what PZPN's representatives thought of it. In late February 1927, at the PZPN's meeting in Warsaw, its officials openly opposed the formation of a league, but the clubs, allegedly egged on by some generals from the Polish Army (which, after May Coup of 1926, played a key role in all aspects of public life), proceeded anyway. The creation of the League was announced on 1 March 1927.

The only opponent of the League's formation was Cracovia – a very influential and strong organization in Polish football of the 1920s. Cracovia's boycott was because its chairman, Dr. Edward Cetnarowski, at the same time held the post of the director of PZPN. Cetnarowski was a personality known not only in Poland, but also in other countries. It was due to his efforts that in September 1923 his club, Cracovia, went on a tour to Spain. The Kraków side's results were a 1–1 tie with FC Barcelona and a 0–1 loss to Real Madrid. In October, also thanks to Cetnarowski, FC Sevilla came to Kraków and lost 2–3 to Cracovia.

Early years of the League 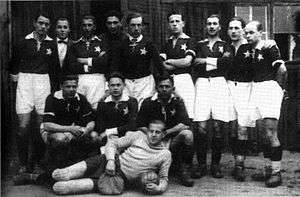 Games of the first Championships started on 3 April 1927. All major teams (except for Cracovia) took part in it. This is the list of the teams (in the order they finished in November 1927):

In this first season of the League, fight for Championship was decided between two powerful teams – Wisła Kraków and 1.FC Katowice. This rivalry was treated very seriously, not only by the two sides involved, but also by the whole nation. 1.FC was regarded as the team supported by German minority, while Wisła, at the end of this historic season, represented ambitions of all Poles.

Some time in the fall of 1927 in Katowice, an ill-fated game between 1.FC and Wisła took place. Stakes were very high – the winner would become the Champion. Kraków's side won 2–0 and became the Champion. 1.FC finished second, third was Warta Poznań.

In 1928 Cracovia finally decided to enter the League, which was gladly accepted by all fans of football. However, Championships were once again won by Wisła, with such excellent players as Henryk Reyman, Mieczyslaw Balcer and Jan Kotlarczyk. Warta Poznań was second and Legia Warsaw third. This was also the last year of 1.FC's glory. The team finished fifth, to be relegated forever at the end of 1929 season.

In 1929 yet another team (after Cracovia, Pogon Lwów and Wisła) was added to the list of Champions of Poland. This time it was Warta Poznań, which finished one point ahead of Garbarnia Kraków.

However, after the last game, on 1 December 1929, it was Garbarnia Kraków that was celebrating the Championship. Two weeks later, in mid-December, PZPN's officials changed the result of the Warta – Klub Turystow Łódź game. Originally, Warta lost 1–2, but due to walk-over (it was decided that one of Łódź's players did not have all necessary documents), this was changed to 3–0 in favor of Poznań's side. As a result of the decision, Warta (with 33 points) became the Champion, Garbarnia finished second with 32 points and Klub Turystow was relegated.

In 1930, Cracovia regained Championship, (to repeat this success in 1932) and a year later another Kraków's side, Garbarnia, won the League. It is clear that the 1927–1932 period was marked by dominance of teams from Kraków. During this time, only once (Warta Poznań, 1929) the Championship was won by a side from a different city. The 1931 Champion, Garbarnia, was unique as this was the first time that the League had been won by a side whose all players had been bought from other teams.

As has been said, the early 1930s marked a decline of the dominance of Kraków and Lwów as centers of Polish football. The point of gravity slowly moved towards west – to Polish part of Upper Silesia, which had belonged to Poland since 1921 (see: Silesian Uprisings). In 1932 the champion was Cracovia, but starting in 1933, Ruch Chorzów (then: Ruch Wielkie Hajduki) completely dominated the league, being the champion for 4 times in a row.

Ruch, with such excellent players as Teodor Peterek, Ernest Wilimowski and Gerard Wodarz was by far the best team in those years. For example, in 1934 it finished seven points ahead of second Cracovia. Other important teams of these years were: Cracovia, Wisła Kraków, Pogoń Lwów and Warta Poznań.

In 1933 and 1934 there were 12 teams in the League. In 1935 this number was cut to 11 and in 1936 – to 10. Football officials did it on purpose – with fewer teams, the competition was supposed to be harder, which would attract fans to the stadiums. However, supporters' turnout was not impressive, with Ruch Chorzów as the most popular team, both at home and away.

In late 1935 (the league held its games in the spring-summer-fall system) fans were shocked to find that Cracovia, the legend of this sport, was relegated to the A-class. Kraków's side absence lasted for a year – it returned in 1937, to become the champion.

Ruch Chorzów was still the dominant team, winning the Championships in 1936 and 1938. In 1937 Ruch's streak of four consecutive champions was broken by Cracovia, and in 1939 the championships were not finished. By 31 August 1939, after some 12 games, Ruch was the leader of the 10-team League. Last games of this summer occurred on 20 August. Then, a break was planned, because the National Team was going to play a few international friendlies. Games were to be re-introduced on 10 September.

This is the list of the ten teams that participated in last, historic games for Championships of interwar Poland. Teams are presented according to their position on the table, as of 31 August 1939:

As a result of the Second World War, the borders of Poland changed significantly. Lwów, one of the centers of Polish football (with such teams as Pogoń Lwów, Czarni Lwów and Lechia Lwów) was annexed by Soviet Union and all these teams ceased to exist. Lwów's football officials and players moved westwards, creating such clubs as Polonia Bytom, Odra Opole and Pogoń Szczecin (see: Recovered Territories). Another important center, Wilno (with the team Śmigły Wilno), was also annexed by the Soviets (see: Polish areas annexed by the Soviet Union). In exchange, Poland gained a large swath of formerly German territory in particular in Silesia, with its capital Wrocław (home of double champion Śląsk Wrocław) and towns such as Zabrze (home of 14-times champion Górnik Zabrze, Bytom (home of champions Polonia Bytom and Szombierki Bytom) and Lubin (home of double champion Zagłębie Lubin).

There are 16 clubs in the Ekstraklasa. During the course of the season each club plays the others twice, once at their home stadium and once at that of their opponents, for a total of 30 games (240 games in the season). From the 2013–14 season onward after 30th round league will be split into 'champion' (top eight teams) and 'relegation' (bottom eight teams) groups. Each team will play seven more games (1–4 and 9–12 teams will play four times at home), starting with half the points (rounded up) achieved during the first phase of 30 matches. The changes extend the season to total of 296 matches played.[2] 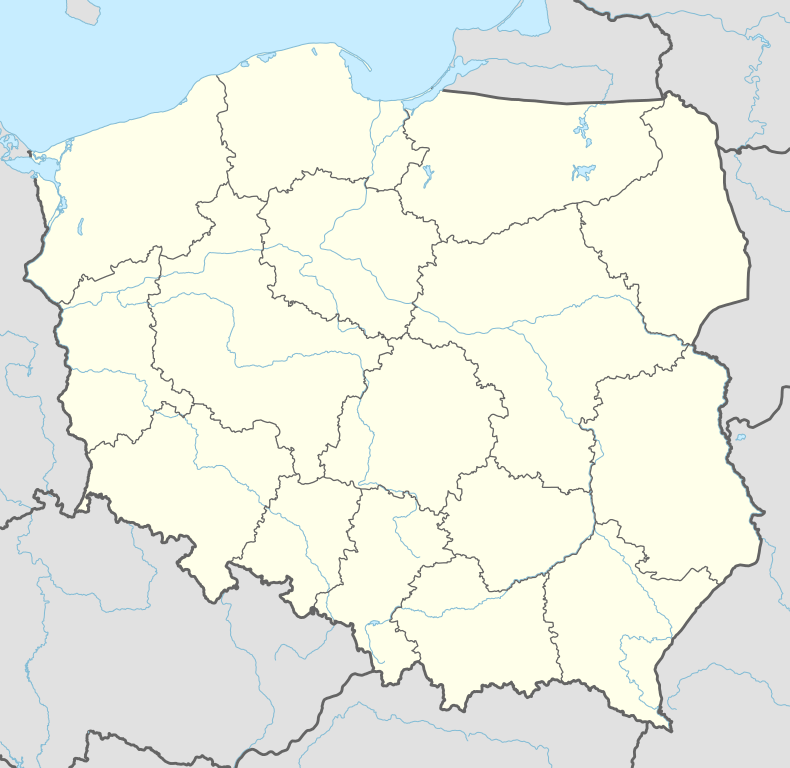 Zagłębie
Location of teams in 2016–17 Ekstraklasa

a: Founding member of Ekstraklasa

Clubs by number of league championships

The following table lists the league champions by the Polish voivodeship regions (current, valid since 1998).

The current (as of August 2015) officially-sanctioned Championship stars are:

The all-time league table consists off all the teams that once participated in the Ekstraklasa. Data from the 1927 – 2015–16 seasons.

1. An equal number of points on the basis of their goal difference, then greater number of goals scored. 2. In seasons 1927 – 1994–95 for a win awarded 2 points and 1 point for a draw. In seasons 1986–87 – 1989–90 for win at least three goals difference additionally awarded 1 point, while a losses at least 3 goals difference subtracted one point. Since the season 1995–96 for win gives 3 points and 1 point for a draw. 3. Included additional qualification games between both teams and league championship and remain in the league (including 11 games in 1948, 1986–87, 1987–88, 1988–89) and was not included in the table play-off for the right to play in the league between teams of different class divisions. 4. Included matches with unfinished 1939 season.

With the following mergers and acquisitions teams:

Several clubs have been involved in a corruption scandal and were/are in danger of relegation:

All matches from the 2011–2012 season are telecast live nationally by Canal+ Poland. Telewizja Polska has the rights to air live 4 games per season on a non-scrambled channel.[4]