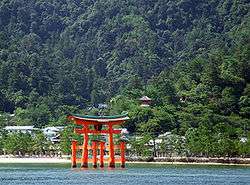 Japan established its first kōen (公園) or public parks in 1873 (Asakusa Park, Asukayama Park, Fukagawa Park, Shiba Park, and Ueno Park). In 1911 local citizens petitioned that the shrines and forests of Nikkō be placed under public protection and in 1929 the National Parks Association was formed. In 1931 the first National Parks Law (国立公園法) was passed and, after much study and survey, in March 1934 the first parks were established - Setonaikai, Unzen and Kirishima - with five more in December and a further four two years later. Three further parks were established under the old National Parks Law, in colonial Taiwan in 1937: the Tatun National Park, the smallest in Japan; Tsugitaka-Taroko National Park, the largest; and Niitaka-Arisan National Park, with the highest mountain in then Japan.[3] Ise-Shima was the first to be created after the war, and a further seven had been added by 1955. In 1957 the Natural Parks Law replaced the earlier National Parks Law, allowing for three categories of park, the National, Quasi-National, and Prefectural Natural Parks. With minor amendments this established the framework that operates today.[4][5]

The area of each National and Quasi-National Park is divided into ordinary, special and marine park zones. Special zones are further subdivided into special protection and class I, II, and III special zones, restricting access and use for preservation purposes. The state owns only approximately half of the land in the parks.[10]