Not to be confused with Osaka University.

The No.1 Building (main building) of Osaka City University, built in 1934

Osaka City University (OCU) (大阪市立大学, Ōsaka shiritsu daigaku), abbreviated to Ichidai or Shidai (市大), is a public university in Japan. It is located in Sumiyoshi-ku, Osaka.

OCU's predecessor was founded in 1880, as Osaka Commercial Training Institute (大阪商業講習所) with donations by local merchants. It became Osaka Commercial School in 1885, then was municipalized in 1889. Osaka City was defeated in a bid to draw the Second National Commercial College (the winner was Kobe City), so the city authorities decided to establish a municipal commercial college without any aid from the national budget.

In 1901, the school was reorganized to become Osaka City Commercial College (市立大阪高等商業学校), later authorized under Specialized School Order in 1904. The college had grand brick buildings around the Taishō period.

In 1928, the college became Osaka University of Commerce (大阪商科大学), the first municipal university in Japan. The city mayor, Hajime Seki (関 一, Seki Hajime, 1873–1935) declared the spirit of the municipal university, that it should not simply copy the national universities and that it should become a place for research with a background of urban activities in Osaka. But, contrary to his words, the university was removed to the most rural part of the city by 1935. The first president of the university was a liberalist, so the campus gradually became what was thought to be "a den of the Reds (Marxists)". During World War II, the Marxists and the socialists in the university were arrested (about 50 to 80 members) soon after the liberal president died. The campus was evacuated and used by the Japanese Navy.

After the war, the campus was occupied by the U.S. Army (named "Camp Sakai"), and a number of students became anti-American fighters and "worshipers" of the Soviet Union. The campus was returned to the university, partly in 1952, and fully in 1955. In 1949, during the allied occupation, the university was merged (with other two municipal colleges) into Osaka City University, under Japan's new educational system. 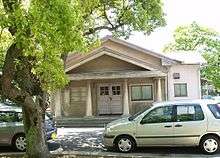 In 1949 OCU had five faculties (Business / Economics / Law and Literature / Science and Engineering / Home Economics). In 1953, the Faculty of Law and Literature was divided into two faculties. In 1955, Osaka City Medical University was incorporated and became the Faculty of Medicine. In 1959, the Faculty of Science and Engineering was divided into two faculties. In 1975, the Faculty of Home Economics was reorganized into the Faculty of Human Life Science. In 2003, the Graduate School of Creative Cities was established. In 2006, the Urban Research Plaza and the Advanced Research Institute for Natural Science and Technology were established. Due to financial problems in many cities, all of the municipal universities in Japan were requested to incorporate. OCU became a Public University Corporation in 2006. In 2010 OCU celebrated its 130th anniversary.