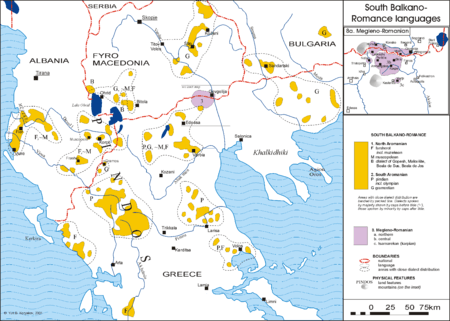 The extent of Megleno-Romanian and Aromanian 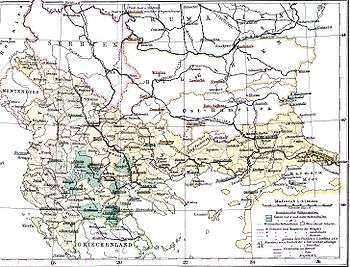 Romanian schools for Aromanians and Meglenoromanians in the Ottoman Empire (1886)

Megleno-Romanian (known as Vlăhește by speakers, and Megleno-Romanian or Meglenitic and sometimes Moglenitic or Meglinitic by linguists) is a Romance language, similar to Aromanian and Romanian, or a dialect of the Romanian language.[4] It is spoken by the Megleno-Romanians in a few villages in the Moglena region that spans the border between the Greek region of Macedonia and the Republic of Macedonia. It is also spoken by emigrants from these villages and their descendants in Romania and by a small Muslim group in Turkey. It is considered an endangered language.

Megleno-Romanian is a member of the Italic branch of the Indo-European language family. More specifically, it is an Eastern Romance language, a language formed after the retreat of the Roman Empire from Southeastern Europe. Some linguists consider it to be an intermediary between Romanian and Aromanian, often being considered either a dialect of Romanian, a dialect of Aromanian, or an independent language. It is much closer to standard Romanian than the Aromanian language, suggesting that it split from Proto-Romanian later than Aromanian. Megleno-Romanian has been strongly influenced by the neighbouring South Slavic varieties.

The term "Megleno-Romanian" has been used by linguists who noticed the similarity to the Romanian language. The Megleno-Romanians identify themselves as Vlahi (see Etymology of Vlach for more on this term).

Megleno-Romanian is spoken in several villages in the Pella and Kilkis regional units of Macedonia, Greece, as well as in a handful of villages across the border in the Republic of Macedonia. In one village, Huma, the language is spoken by most inhabitants. Some people of Megleno-Romanian origin who live in the cities of Gevgelija and Skopje have preserved their native language. After World War I, some Megleno-Romanians moved to Romania, many of them settling in the village of Cerna in Tulcea County, where about 1,200 people continue to speak Megleno-Romanian. In 1940, about 30 families moved from Cerna to the Banat region of Romania in the villages of Variaş, Biled and Jimbolia. Some speakers who were identified as Muslims were moved to Turkey from Greece as part of the population exchange of the 1920s.

Megleno-Romanian has some unique phonetic characteristics, not found in the other Eastern Romance languages:

Much of the vocabulary is of Latin origin and much of its phonetics and semantics is shared with Aromanian and Romanian: (n.b.: MR=Megleno-Romanian, DR=Daco-Romanian, i.e. Romanian)

Megleno-Romanian also contains some words that have cognates with Albanian. These words are present in Daco-Romanian too:

There are also some words which are of Slavic origin and which can be found in all the Eastern Romance languages:

There are a number of Byzantine and Modern Greek words, several dozens of which are also found in Daco-Romanian (Romanian language) and Aromanian and about 80 words that were borrowed via Macedonian and Bulgarian languages and other languages of the Balkans. Prior to the creation of the modern state of Greece, Megleno-Romanian borrowed very few words directly from Greek.

The most important influence on Megleno-Romanian was the East South Slavic languages, this influence being more profound than that exerted by Greek on Aromanian. The linguist Theodor Capidan argued that the words borrowed show some phonetic features of the Bulgarian language dialect spoken in the Rhodope Mountains. There are many instances where basic words of Latin origin that can still be found in Daco-Romanian and Aromanian were replaced by Slavic words. In some cases, standard Romanian also independently borrowed the same word.