The modern city of Mima was established on March 1, 2005, from the merger of the former towns of Mima, Anabuki and Waki, and the village of Koyadaira (all from Mima District). 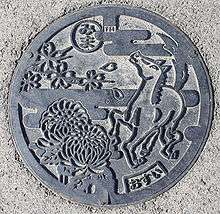 Horse depicted in manhole of Kozato and Kirai area in Old Mima.

The name Mima (美馬) is derived from two characters meaning "Beautiful Horse". Mima was once home to many horse breeders. Although breeders and keepers are not so common in present-day Mima, the history lives on today in art, local products, and such.

There is also the story of a famous horse named Ikezuki. He is a famous horse born from a captive Mima Town mother and a wild father from Mount Tsurugi. He later belonged to Shogun Yoritomo and often makes appearances throughout history, such as in Tale of Heike, Genpei War, and The Battle of Uji (1184) (crossing the Uji River). Ikezuki's mother was buried at what is now Ikezuki Park. It is unsure whether Ikezuki is a factual or fictional character.

Straight from the Edo and Meiji Eras, Udatsu Townscape is a symbol of Wakimachi’s old days. Characteristic of the buildings are the presence of “Udatsu,” extensions of the roof that served as protection from the spread of fires. Udatsu were also symbols of fortune, and continue to proclaim the prosperity of the merchants even today. The charm of the old town continues to excite nostalgia, as the broadcast industry often features it in television dramas and commercials. The national government recognized Udatsu Street as an “Important Preservation District for Groups of Historic Buildings” in December 1988.

Originally constructed in 1934, Wakimachi Theater was a playhouse for Kabuki, Rōkyoku (storytelling accompanied with Shamisen music), and other such entertainment. In the post-WWII era, it became a movie theater, and was then closed in 1995. It was scheduled for demolition, but after Shōchiku Films decided to use it as a location in their famous film, “The Man Who Catches Rainbows,” it was brought back into the limelight. The theater underwent restoration in 1999.

Teramachi, which means "Temple Village," has many temples constructed in a small area. There's Ganshō-ji (願勝寺), which was probably built during the Nara period, featuring a traditional landscaped garden complete with a pond and stream. Anraku-ji (安楽寺) which is the oldest Jōdo Shinshū Buddhist temple in Shikoku. Anraku-ji features a full-blown Noh stage, hosting Noh and other such plays from the local Noh Appreciation Group. There’s also Saikyō-ji (西教寺) of the same movement, and Rinshō-ji.

Built approximately 1400 years ago, these tombs are large dome-shaped rooms at the end of a short tunnel. Having been designated as a National Historical Site in 1942, its unique structure continues to be studied today. Relics from the tombs are kept in nearby Tera-machi. The large tomb, to the east, is called the “Drum Tomb”. The mound itself measures 13 meters while the height and width inside measures 4.3 m and 3.4 m, respectively. Including the tunnel, the length of the mound is measured at 37 m. The second tomb, to the west, is called the “Shelf Tomb”. Length is 20 m, height is 8.7 m, while height and width inside is 2.8 m and 2.0 m, respectively.

The late Mr. Aoki returned from Nagasaki to his hometown, Mima. He built a large Taisho-era mansion as a retirement home for himself and hs wife. His wife worked in the large herb garden and made bamboo spatulas from morning to evening.

The house stood vacant for 30 years, before the Aokis, now living in Osaka, donated the house to its hometown, Mima.

The Aoki Residence is located on 3,590 m² of land, with a 2 m high wall surrounding it. The main building includes several old fashioned rooms, featuring both tatami and clay floors. There is also a two story warehouse and other small buildings.

Today, the Aoki Residence holds many events, including but not limited to gatherings of local residents and enthusiasts interested in pottery, indigo dye, flower arranging, dancing, shamisen, etc. It may even be used for wedding receptions.

The Miki Family Residence was built during the Edo Period. The Miki Family was famous for procuring many historic Kamakura Era and Muromachi Era documents from the surrounding Koyadaira and Yamakawa area. The house was recognized as an important cultural heritage site and remains today as one of the oldest houses in Tokushima. The grounds feature the main house, as well as several small buildings, mostly for storage. There is also a museum and garden, featuring many cherry blossom trees. The museum and residence is closed from December to March. The garden is best seen in April, when the cherry blossoms are blooming.

The former Nagaoka residence(旧長岡家住宅 Kyū Nagaoka-ke Jūtaku) was originally located at the foot of the southern slopes of the Sanuki mountains(讃岐山脈 Sanuki Sanmyaku). In 1976 the residence was awarded the status of 'Important Cultural Property' (国指定重要文化財 Kuni-shitei Jyūyōbunkazai). In 1979 it was disassembled and reassabled in the Wakimachi area. The house is 12 meters long and 6,6 meters wide. It has a Yosemune-style (寄棟造り Yosemune-tsukuri) thatched roof. The outside walls aren't made from the usual cedar tree bark or wooden planks, but from mud and earth. This is characteristic for houses on the foot of the southern slopes of the Sanuki mountains (as there is very little rainfall here).

Created as a tribute to Mima's pride, Ikezuki, this park also serves as the resting place for Ikezuki's mother (horse). It features a rock garden, picnic area, and restroom facilities. 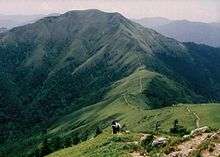 Mount Tsurugi is the second highest mountain in Shikoku and in Western Japan. It is bordered by the city of Mima, Mima District, Naka District and Miyoshi District.

The Yoshino River flows west-east through Mima. It is the second longest river in Shikoku, boasting a length of 194 km. It is a popular spot for fishing, kayaking, and rafting.

Flowing from south to north through the town of Anabuki and the village of Koyadaira is the Anabuki River. Its sources are a collection of many streams from around the Mt. Tsurugi area, and is popular for its cleanliness. As of 2005, the Anabuki River has held its position as the cleanest river in Shikoku for 11 years. There is a thriving population of the Japanese fishes ayu, amego, and iwana. The upstream town of Koyadaira hosts the Amego Fishing Competition every year in April.

In the southern end of the city, in the Mt. Tsurugi area, is the sacred Nakoyama highlands. Located just east of Mt. Tsurugi, its wide slopes peek at 1,000 meters, making it the second tallest mountain in Western Japan. Beginning in April of each year, many bungalows, cottages, and RV parks open and continue operation through the end of November. One face of the mountain has a famous grass ski area, hosting the Annual World Championships with the longest run stretching 500 meters and descending 62 meters.

During the Edo and Meiji eras, Wakimachi prospered as an important distribution center of indigo dye (藍染め, aizome). The aizome season lasts from April to July and again from September to October.

Around 1955, there were about 200 stores lined up that were dedicated to the art of making paper umbrella in Mima. Today, two of the shops still exist. The masters of this traditional art construct the frame from bamboo, apply Japanese paper dyed with indigo, then oil it and apply various decorations, finishing it with a coat of lacquer.

Yuzu is first harvested in late fall. It is a yellow fruit that is common around the Mt. Tsurugi area as the weather breaks into winter. In recent years, the local farmers in the Koyadaira area have been producing yuzu using organic compost, with little or no agricultural chemicals. Lately, the product has been diversified with products such as organic yuzu ponzu and so on. 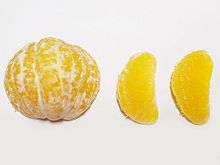 The interior sections of a Hassaku mandarin orange.

Hassaku oranges are harvested just as the frost begins to strengthen, at the end of December. They are then immediately put into storage until they ripen in February, after which they are shipped. In the Anabuki area, eco-farming efforts are being introduced as chemicals and fertilizers are being reduced and cut.

In Mima, Delaware and Berry-A varieties of grapes are produced. They are harvested in two waves, one in mid-July and the other in mid-August. In Wakimachi, eco-farming efforts are being introduced as chemicals and fertilizers are being reduced and cut.

Blueberries are a healthy food well known for their power to keep the eyes active, refresh the capillaries, and fight oxidation and the effects of aging. In Mima, “The Association for the Research of Blueberries” was established whose aim is to find new products and uses for blueberries.

The 2009 champions of the Ikada Kudari competition

Each year, Anabuki hosts the Ikada Kudari, a homemade raft competition. Several teams prepare for the event by building rafts of various shapes and sizes. On the day of the event, the teams ride, pull, and push their rafts down a stretch of the Anabuki River. Awards are given, including the fastest and the most unusual rafts.

Mima is serviced by Takamatsu Airport and Tokushima Airport. There are no airports in Mima.

Three train stations along the Tokushima Line (JR Shikoku) serve Mima. They are, in east-west order: