This article is about Hindu Saint. For the agriculturist, see G. Nammalvar.

Nammalvar (Tamil: Nammāḻvār) is one of the twelve alwar saints of Tamil Nadu, India, who are known for their affiliation to the Vaishnava tradition of Hinduism. The verses of alwars are compiled as Nalayira Divya Prabandham and the 108 temples revered are classified as Divya Desam. Nammalvar is considered the fifth in the line of the twelve alwars. He is highly regarded as a great mystic of the Vaishnava tradition. He is also considered the greatest among the twelve alwars and his contributions amount to 1352 among the 4000 stanzas in the Nalayira Divya Prabandam.

According to traditional scriptures, Nammalwar was born in 3059 BCE in Alwarthirunagiri.[1] In Hindu legend, Nammalwar remained speechless from his birth sitting in a tamarind tree and he first interacted with Madhurakavi Alvar, who saw a bright light shining to the south, and followed it until he reached the tree where the boy was residing.

The works of Nammalwar were compiled by Madhurakavi as four different works, the Tiruvayumoli (1102 verses), Thiruviruttam (100 verses), Thiruvaasiriam (or Thiru Aasiriyam - 7 verses) andPeriya Thiruvanthadi (87 verses). The works of Nammalwar contributed to the philosophical and theological ideas of Vaishnavism. Along with the three Shaiva Nayanars Appar, Sundarar and Sambandar, they influenced the ruling Pallava kings of South India, changing the religious geography from Buddhism and Jainism to Hinduism.

In South Indian Vaishnava temples, Nammalwar is given a status equal to that of Hindu god Vishnu and has images and festivals associated with him. The Garudasevai festival in Nava Tirupathi, the nine Vishnu temples in Thoothukudi region and the Araiyar Sevai during the Vaikunta Ekadesi festival in Srirangam temple are dedicated to him. The verses of Nammalwar and other alwars are recited as a part of daily prayers and during festive occasions in most Vishnu temples in South India. 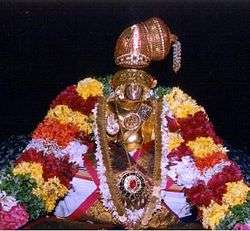 The word alwar means the one who dives deep into the ocean of the countless attributes of god.[2] The Alwars are considered the twelve supreme devotees of Vishnu who were instrumental in popularising Vaishnavism. The religious works of these saints in Tamil, songs of love and devotion, are compiled as Nalayira Divya Prabandham containing 4000 verses and the 108 temples revered in their songs are classified as Divya Desam.[3][4] The saints had different origins and belonged to different castes. As per tradition, the first three alwars, Poigai Azhwar, Bhoothath Azhwar and Pey Azhwar were born miraculously. Thirumalisai Alvar was the son of a sage, Thondaradippodi Alvar, Madhurakavi Alvar, Periyalvar and Andal were from brahmin community, Kulashekhara Alwar a kshatriya, Nammalwar a vaishya, Thiruppaan Alvar a paanar and Thirumangai Alvar a kallar. The Divya Suri Charitra by Garuda-Vahana Pandita (11th century), Guruparamparaprabhavam by Pinbaragiya Perumal Jiyar, Periya tiru mudi adaivu by Anbillai Kandadiappan, Yatindra Pranava Prabavam by Pillai Lokacharya, commentaries on Divya Prabandam, Guru Parampara (lineage of Gurus) texts, temple records and inscriptions give a detailed account of the alwars and their works. According to these texts, the saints were considered incarnations of some form of Vishnu. Poigai is considered an incarnation of Panchajanya (Krishna's conch), Bhoothath of Kaumodakee (Vishnu's Mace/Club), Pey of Nandaka (Vishnu's sword), Thirumalisai of Sudarshanam (Vishnu's discus), Namm of Vishvaksena (Vishnu's commander), Madhurakavi of Vainatheya (Vishnu's eagle, Garuda), Kulasekhara of Kaustubha (Vishnu's necklace), Periya of Garuda (Vishnu's eagle), Andal of Bhoodevi (Vishnu's wife, Lakshmi, in her form as Bhudevi), Thondaradippodi of Vanamaalai (Vishnu's garland), Thiruppaan of Srivatsa (An auspicious mark on Vishnu's chest) and Thirumangai of Sharanga, Rama's bow. The songs of Prabandam are regularly sung in all the Vishnu temples of South India daily and also during festivals.[4][5]

According to traditional account by Manavala Mamunigal, the first three alwars namely Poigai, Bhoothath and Pey belong to the Dvapara Yuga (before 4200 BC). It is widely accepted by tradition and historians that the trio are the earliest among the twelve alwars.[3][4][6][7][8] Along with the three Shaiva Nayanars, they influenced the ruling Pallava kings, creating a bhakti movement that resulted in changing the religious geography from Buddhism and Jainism to Hinduism. The alwars were also instrumental in promoting the Bhagavatha cult and the two epics of India, the Ramayana and the Mahabarata.[9] The alwars were instrumental in spreading Vaishnavism throughout the region.[10] The verses of the various alwars were compiled by Nathamuni (824-924 AD), a 10th-century Vaishnava theologian, who called it the "Tamil Veda".[11][12] 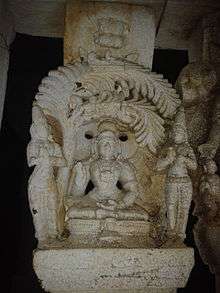 According to traditional scriptures, Nammalwar was born in 43rd Kali of 3059 BC.[1] He was born in a Pillai ( Vellalar ) family at Thirukurukur (modern day Alwarthirunagiri) in the southernmost region of the Tamil country.[13][14] Some sources consider his to have been a princely family, although of shudra status (To prove world that "caste is not based on birth and it is based on action").[13][15][16]

Tradition says that he must have been born fully enlightened because as a baby he never cried or suckled and never opened his eyes. According to legend, as a child he responded to no external stimuli and his parents left him at the feet of the deity of Sri Adhinathar in Alwarthirunagari. The child then got up and climbed into a hole in a tamarind, sat in the lotus position, and began to meditate. It appears he was in this state for as long as sixteen years when a Tamil poet and scholar in North India named Madhurakavi Alvar saw a bright light shining to the south, and followed it until he reached the tree where the boy was residing. Unable to elicit any reaction from the child, he asked him a riddle: "If the small is born in a dead's body (or stomach), what will it eat and where will it stay?" meaning, if the subtle soul is embodied in the gross body, what are its actions and thoughts? Nammalvar broke his lifelong silence and responded, "That it will eat, it will rest!" meaning that if the soul identifies with the body, it will be the body but if it serves the divine, it will stay in vaikunta and eat(think) of God.[17] Madhurakavi Alvar realized the divinity of this child.

Its is believed that in kali yuga, the doors of vaikundam (the supreme abode) was opened first time for him by Sriman Narayanan himself and it is believed that the followers of Sir nammalwar have the most easy access to the supreme abode. Following his moksha his family entitle as the subbiah kumara pillai (the auspicious son's) by holy Vaishnava acharya's and they serve him and believe him to be Sriman Narayanan Tiruvadi and celebrate him as kulaguru.

Nammalvar was one of the twelve alvar poet-saints who immersed themselves in a love of Vishnu and who had a considerable knowledge of ancient Tamil literature and its variants of traditional stories concerning Vishnu and his associates, as well as the philosophical differences between Buddhism, Hinduism and Jainism.[14] 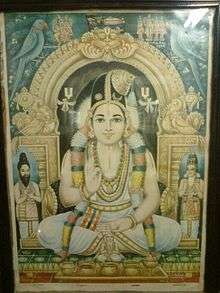 He contributed four works to the Divya Prabhandham. These works consisted of 1,296 poems, making him the most prolific contributor to the 4,000 hymns written by the Alvar poet-saints.[13] These works are:

In the Srivaishnava canon, these four represent (in Tamil language) the four Sanskrit vedas, respectively, the Sama Veda, Rig Veda, Yajur Veda and Atharva Veda. According to tradition "He poured the cream of these vedas" into his songs and poetry that were the result of deep mystic experience. Though Nammalvar did not visit any of the 108 divyadesam temples talked about in the Vaishnava religion, it appears from his works he must have had the vision of all the archa forms in the temples he glorified in his hymns.[18]

The distinction of Nammalwar with his contemporaries is above the devotional aspects in writing, the visualization and dramatic movement. He mentions Vishnu in various aspects frequently in all his verses. The poems of Tiruvirrutam are depicted fully between the lone context of the hero and heroine. Most of these are utterances of the hero, heroine, her friends to the heroine or her mother to the heroine. The heroine always perceives his hero, Vishnu everywhere around her. As per Varadachari, Tiruviruttam is "an account of the pilgrimage of the soul to its transcendence over its ignorance, sleep and sloth in which it is caught up in the body". While the medieval poetry is considered self-pity and repentance, his works always have a message of hope.[19]

Nammalwar is regarded as the one of the top three Hindu mystics in India, with the other two being Manickavasagar and Kabir.[20] Nammalwar is considered greatest among the twelve alwars and his contributions amount to 1352 among the 4000 stanzas in the Nalayira Divya Prabandam.

The Garuda Sevai utsavam (festival) in the month of Vaikasi(May-Jun) witnesses nine Garudasevai, an event in which festival image idols from the nava tirupathis temples namely, Mayakoothar Temple, Makara Nedunkuzhai Kannan Temple, Rettai Tirupathi - South Temple, Rettai Tirupathi North Temple, Vaithamanidhi Perumal Temple, Adhinaatha Perumal Temple - Thirukkurugur, Kaaisinavendhan Temple, Vijayaasana Perumal Temple, Sri Vaikuntanatha(Kallapiran) Temple are brought on Garuda vahana. The festival image of Nammalvar is also brought in Anna Vahanam (palaquin) and his verses dedicated to each of these nine temples are recited. The utsavar of Nammalvar is taken in a palanquin to each of the nine temples, through the paddy fields in the area. The verses dedicated to each of the nine Divyadesams are chanted in the respective shrines. It is the most important of the festivals in this area, and it draws thousands of visitors.[21] 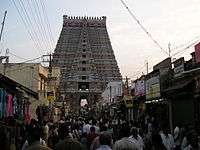 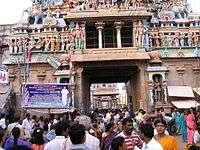 Pagal Pathu(10 day time) and Ra Pathu(10 day night time) festival are celebrated in the month of Margali(December–January) for twenty days in Sri Ranganathaswamy Temple, Srirangam. The first ten days are referred as Pagal-Pathu (10 day day festival) and the second half as Ra Pathu(10 day night time festival). The first day of Ra pathu is Vaikunta Ekadashi. The eleventh day of each fortnight in Tamil calendar is called ekadesi and the holiest of all ekadasis in the Vaishnava tradition is the Vaikunta Ekadashi. Nammalwar, one of the 12 alwars, is believed to have ascended to vaikuntam(the heavenly abode of Vishnu) on this day. The devotion of the 9th-century poet, Nammalwar, and his perceived ascent to heaven are enacted annually. During the festival, through song and dance, this place is affirmed to be Bhoologa Vaikunta(heaven on earth).[22] Araiyar Sevai is a divine colloquim of araiyars, who recite and enact Nalayara Divya Prabanda, the 4000 verses of alwars (Vaishnavite poets of the 7th–10th century).[23][24] Araiyars are born to Araiyar tradition most prevalent in Sri Vaishnava families in Srirangam, Alwar Thirunagari and Srivilliputhur.[23] The tradition of Araiyar Sevai was started by Nathamuni, a 10th-century Vaishnavite who compiled the works of alwars.[24] It is believed as per Hindu mythology that 330 million demi-gods came down to witness the event.[25] The festival deity is brought to the 1000-pillared hall on the morning of Vaikunta Ekadashi through the Paramapada Vasal (gate to paradise). Lakhs of pilgrims rush to enter it after the gate is opened and the deity passes through it as it is believed that one who enters here will reach vaikuntam (heaven) after death. The gate is open only during the ten days of Ra Pathu (10 days of night time festival). On the last day of the festival, the poet Nammalwar is said to be given salvation. The performance is enacted by priests and images in the temple depicts Nammalwar as reaching heaven and getting liberation from the cycle of life and death. At that point, a member from the crowd of devotees, who are witnessing this passion play, goes up to the centre stage and requests Vishnu to return Nammalwar to humanity, so that his words and form in the temple will continue to inspire and save the devotees. Following this performance of the salvation of Nammalwar, the cantors are taken in procession round the temple.[22]