National Highway 544, commonly referred to as NH 544, is a 340 km (210 mi) long highway connecting the city of Salem to Kochi city in southern India. The highway runs through the states of Kerala and Tamil Nadu, connecting various important cities and towns such as Salem, Coimbatore, Palakkad, Thrissur and Kochi. It is a spur of National Highway 44, which forms the North South Corridor of the National Highway network of India.It is passing south of coimbatore. It was formerly designated National Highway 47.[1]

The stretch between the industrial city of Coimbatore and the port city of Kochi is one of the busiest in the Indian Highway system. Most of the traffic in this stretch consists of trucks carrying consumer goods, construction materials, container lorries (bound for Port of Kochi) and passenger vehicles. This is the National Highway that experiences the highest volume of night traffic in India. On an average, over 10,000 lorries use this highway to travel between Coimbatore and Kochi every night.The highway has several motels and restaurants along the entire stretch. 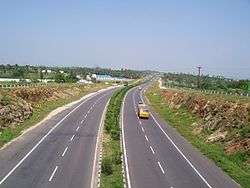 NH 544 Expressway between Coimbatore and Salem in Tamil Nadu

Though the Government of India is investing in widening National Highways, the stretch from Mannuthy (in Thrissur District) to Edappaly (in Kochi City) is almost completely four-laned along the bypass to Kochi city. However, the junction at Edappally with NH 66 which runs to Panvel , Navi Mumbai is a very congested one. The widening of Chengapalli-Walayar stretch of the North–South and East–West Corridor is in process. Of this, the first stretch from Chengapalli to Nillambur in Coimbatore (42.705km), where it would touch the already widened Coimbatore bypass, would facilitate six-lane traffic while the 12 km segment from Madukkarai , Coimbatore to Walayar would be four-lane. Six laning from Chengapalli starts from the Coimbatore bypass of NH-544 and four lane from Madukkarai on the end of Coimbatore Bypass to Tamil Nadu-Kerala border up to Walayar of NH-544 in the State of Tamil Nadu. 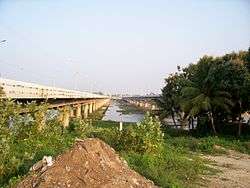 Nearly 400 km (250 mi) of NH 544 between and Salem passing through Kochi, Thrissur, Palakkad and Coimbatore is under various stages of expansion into express highway. The road widening has started at the Salem End of the Highway and the 4 lane work has been completed in the Salem-Chengapalli (Km 0 to 100) stretch and there is a new bridge built on the Cauvery river at Bhavani Kooduthurai. Widening to six lanes is in progress between Perumanallur and Coimbatore city. Also, widening is in progress from Thrissur to Walayar (Kerala- Tamil Nadu Border, Palakkad District, Kerala). Of this, the stretch from Mannuthy to Vadakkanchery in Palakkad District(30 km) would facilitate six-lane traffic while the 58 km segment from Vadakkanchery to Walayar near Coimbatore would be four-lane expressway.

In an effort to improve the traffic systems, the Kerala Road Safety Authority (KSRA) has completed the first phase of installation of high-tech automatic traffic enforcement systems on the 98 km Edappally-Mannuthy stretch of NH 544. As part of the Rs 8.5 crore project, 65 automatic traffic enforcement systems will be installed at 23 points on the stretch. The monitoring technology involves a mixture of virtual sensors, motion detectors, inductive sensors, logo sensors and high resolution cameras. Pictures of number plates would be captured using 10 megapixel cameras. The main server that will be linked to all cameras will be set up at the deputy transport commissioner's office. The magnetic sensors installed on roads will trigger the cameras in case of violations and send a message to the main server. Offenders will be traced based on visuals of vehicles and registration plates and they will be issued notice. The project is being implemented by KSRA and the Motor Vehicles Department with the technical support of Keltron as part of the decision to observe 2011-2020 as the 'decade of action for road safety'.[3]