OCS has been located at Naval Station Newport, Rhode Island since 2007.

Qualified U.S. citizens who hold a bachelor's degree meet with an Officer Recruiter and prepare packages for consideration. Selection is competitive.

Applications are submitted to specific communities, rather than to OCS directly. This is in contrast to USNA and NROTC, where trainees are not associated with a community until soon before commissioning.

OCS classes are designated by the fiscal year of their graduation (e.g. 28-09 would be the twenty-eighth class to graduate in fiscal year 2009). 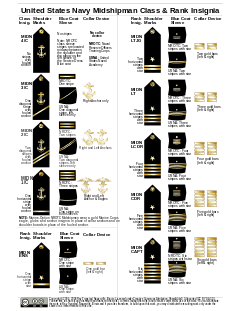 Officer Candidate uniforms are similar to those worn at USNA and NROTC, with several notable differences. Candidates wear plain fouled anchors. In the final phase, Candidate Officers wear the collar device of MIDN ENS through MIDN CAPT, but are never referred to as Midshipmen.

The U.S. Navy Officer Candidate shoulderboard is worn by the entire regiment without reference to collar device.

All those in training at OCS are mustered in at the pay grade of E-5 unless they are prior enlisted already holding a higher pay grade. While attending OCS the students hold a special title known as Officer Candidate.

Candidates who demonstrate ability are gradually granted responsibility and are eventually given positional authority over other candidates. These positions are competitively awarded, and it is considered a significant honor to be selected to serve as Regimental Commander ("RegCom").

In addition to constant physical training and rifle drill, instruction inside and outside the classroom includes:

Every action is scrutinized and shortcomings are swiftly corrected. Candidates who do not meet milestones can be held back in training or removed from the program. Adherence to a Code of Honor is mandatory; violators are removed.

Upon successful completion of the 12-week course the candidates are commissioned as active duty Ensigns (O-1) in the United States Navy.

The new officers then join their predetermined designator communities and are eligible for orders to the fleet or follow-on training.

AOCS contained two parallel track programs, the "traditional" AOCS for college and university graduates that operated on a year-round basis, and the Aviation Reserve Officer Candidate (AVROC) program during the summer and early fall. AVROC, similar in nature to the Marine Corps' Platoon Leaders Class (PLC) program, split the AOCS curriculum in half, with college and university juniors attending the first half during the summer between their junior and senior years, then returning the following summer after college graduation to complete the second half of the program and receive their commissions. During the summer months, AVROC classes would typically enter every other week, with their graduations on alternating weeks from AOCS graduations. For AVROCs, the advantage of their program was that their Pay Entry Base Date (PEBD) was adjusted to the day they signed up for the AVROC program, typically two to three years before their commissioning. As a result, when they were finally commissioned, they received a higher base pay rate reflecting two to three years of service (i.e., O-1 over 2 years or O-1 over 3 years) versus their traditional non-prior service AOCS counterparts (i.e., O-1 less than 2 years). AVROCs were otherwise indiscernible from traditional AOCs.

Another subset of the traditional AOCs was the Naval Aviation Cadet (NavCad) Program. NavCads, who had some college, but typically lacked a bachelor's degree, completed the entire AOCS curriculum, but were not commissioned upon graduation. Instead, they attended their entire flight school program as non-commissioned candidates and did not receive their commissions as Ensigns until they completed flight training and received their wings as Naval Aviators or (prior to 1966) Naval Aviation Observers or (1966 and later) Naval Flight Officers. These former NavCads, commissioned officers without bachelor's degrees, would complete their initial fleet squadron tour and would then be sent to the Naval Postgraduate School or a civilian college or university as Lieutenants on their first shore duty assignment in order to finish their baccalaureate degree. AOCS stopped taking NavCad civilian and enlisted candidates in 1968 and the program was discontinued. The NavCad program was reintroduced in early 1986 due to increased fleet requirements for Naval Aviators (Naval Flight Officers were not procured via the later incarnation of NavCad), but the program was eliminated again in October 1993 as a result of the end of the Cold War and resultant manpower reductions in the active duty naval officer ranks.

AOCS was a department of the Naval Aviation Schools Command (NAVAVSCOLSCOM) and organized as a regiment with three battalions until just following the Vietnam War, when it was reduced in size to two battalions. Each battalion consisted of several AOCS classes graduating every two to three weeks. Like OCS, AOCS also emphasized Leadership, Physical and Military training. However, whereas OCS incorporated Academics such as Shipboard Engineering and Shipboard Navigation, AOCS incorporated "the Big 3" Aerodynamics, Aircraft Engines, Air Navigation and land and water survival training that USNA, NROTC, Marine Corps OCS and PLC, and USCGA and Coast Guard OCS graduates concurrently attended as part of NAVAVSCOLSCOM's Aviation Pre-Flight Indoctrination (API) program for commissioned officer flight students.

Unlike OCS, AOCS classes were numbered by graduation date in the calendar, rather than fiscal year.

Unification and relocation to Newport

The first US Navy OCS at Newport, Rhode Island began operation in 1951 and was closed down in April 1994 when the programs were merged into a single OCS in the former AOCS facilities at NAS Pensacola.

In September 2007, OCS returned to Newport as a result of the 2005 BRAC Commission.

At AOCS, all basic military training was administered by enlisted United States Marine Corps Drill Instructors, a holdover from World War II when AOCS and NavCad graduates were given an option of a commission as either an Ensign in the Navy or a 2nd Lieutenant in the Marine Corps. This facet of the training was considered a point of pride by the graduates of AOCS, and a mark of distinction they felt separated themselves from the graduates of OCS in Newport, as well as NROTC and the Naval Academy. Tradition dictated that when AOCS graduates were commissioned, the first salute they received was from their former Marine Corps Drill Instructor (returned with a silver dollar handshake). 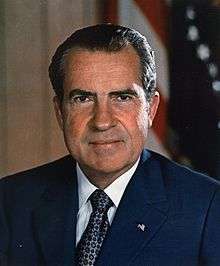 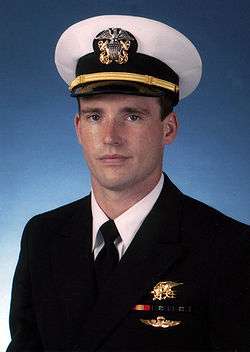