The Old State Capitol (Kentucky), also known as Old Statehouse, was the third Capitol of Kentucky. The building in Frankfort, Kentucky served as the capitol of the Commonwealth of Kentucky from 1830 to 1910. The building has been restored to its American Civil War era appearance.

The Kentucky legislature voted for its construction in 1827. The building was designed in the Greek Revival style by Gideon Shryock, an early Lexington, Kentucky architect. The Old State Capitol was his first building and he was only twenty-five years old. Shryock chose the Greek Revival style to symbolically link Kentucky, a young republic, with ancient Greece, the prototype of popular democratic government. He wanted the front of the building to duplicate the Temple of Minerva Polias at Priene. Greek temples had no windows, therefore the front of the Capitol is devoid of fenestration. Other striking architectural features include a famous self-supporting stone stairway and a domed lantern above it to bring in an abundance of sunlight. 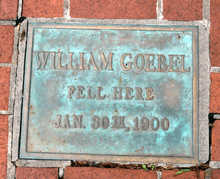 A plaque set in front of the building marks where Goebel fell after being shot.

A bitterly contested 1899 state governor election came to a climax when Democratic claimant William Goebel of Covington, Kentucky was assassinated at the capitol on his way to be inaugurated. A plaque reading "William Goebel fell here, Jan. 30th, 1900" exists near the front entrance of the building.

The current Kentucky State Capitol, Kentucky's fourth, was built in 1910. The Old State Capitol has served as a museum and the home of the Kentucky Historical Society since 1920.

The building was designated a U.S. National Historic Landmark and was listed on the National Register of Historic Places in 1971.[1][2]