Covington is a city in Kenton County, Kentucky. It is located at the confluence of the Ohio and Licking rivers. Cincinnati, Ohio, lies to its north across the Ohio and Newport, Kentucky, to its east across the Licking. Part of the Cincinnati–Northern Kentucky metropolitan area, Covington had a population of 40,640 at the time of the 2010 U.S. census, making it the 5th-most-populous city in Kentucky.[2] It is one of its county's two seats,[3] along with Independence.

In 1814 when John Gano, Richard Gano, and Thomas Carneal purchased The Point, 150 acres (0.6 km2) of land on the west side of the Licking River at its confluence with the Ohio, from Thomas Kennedy for $50,000 and founded the European-American town of Covington.[4] The city was formally incorporated by the Kentucky General Assembly a year later.

Stewart Iron Works was established in 1862 and became the largest iron fence maker in the world. Covington experienced growth during most of the 19th century, only to decline during the Great Depression and the middle 20th century.[4] The city has seen some redevelopment during the late 20th and early 21st centuries. Long the most populous city in Kenton County,

In 1913, city leaders tried to acquire a baseball franchise in the Class D Blue Grass League; the Cincinnati Reds, whose park was just five miles away across the Ohio River, decided against the move. Instead (after several larger cities backed out), Covington was awarded a team in the new "outlaw" circuit, the Federal League.[5]

The city raised $12,500, with $6,000 budgeted to build the ballpark. Bernard Wisehall, a prominent local architect, designed Federal Park (also known as Riverbreeze Park) with a capacity to 6,000. The playing field (bounded by East 2nd Street, East 3rd Street, Madison Avenue and Scott Boulevard[6]) was tiny, believed to be smallest for any pro baseball park ever built: just 194 feet down the right-field line, 267 feet to dead center and 218 feet down the left-field line.[5] (Modern rules dictate no pro ballpark may have a fence closer than 325 feet, even down the foul lines.) Construction did not begin until a month before Opening Day; after starting the season on a long road trip, the Blue Sox managed to sell out their home opener in early May, with thousands of fans turned away.[5]

However, the Covington area did not have the population to support such an ambitious endeavor; although drawing 6,000 fans to their opener, the Blue Sox could only manage an average attendance of 650 for the remainder of their initial nine-game home stand. By June, Covington was seeing only a few hundred fans per contest (all told, the Blue Sox drew about 14,000 to their twenty home games). On June 26, the team moved to Kansas City and ownership of the team reverted to creditors. Federal Park was used for other events the next few years (including boxing and auto polo), but was torn down in 1919, with a tobacco warehouse put up in its place. (The Kenton County Circuit courthouse occupies the spot today.) Covington has not hosted a professional team in any sport since.

Covington claims 19 distinct neighborhoods,[7] ranging in population from several hundred to 10,000 people. Many of the neighborhoods are located in 12 historic districts that are predominantly found in the northern portion of the city. Most of the neighborhoods have active resident associations or block watches that are dedicated to involving residents in strengthening their neighborhoods, improving safety, housing, and beautification.

Covington is located within a climatic transition zone; it is nestled within the southern end of the humid continental climate zone and the northern periphery of the humid subtropical climate of the Upland South, with hot, humid summers and cool winters. Evidence of both a humid subtropical and humid continental climate can be found here, particularly noticeable by the presence of plants indicative of each climatic region; for example, the Southern magnolia (Magnolia grandiflora) from the subtropics and the blue spruce from cooler regions are successful landscape plants in and around Covington. 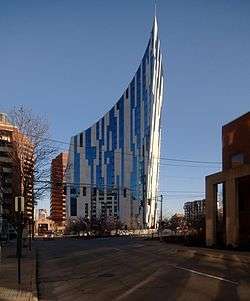 The Ascent at Roebling's Bridge 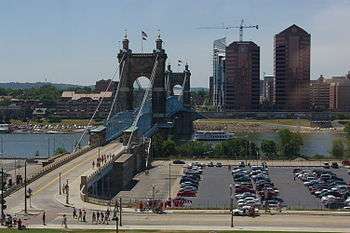 A view of the John A. Roebling Suspension Bridge, looking towards Covington

According to Covington's 2009 Comprehensive Annual Financial Report,[13] the top employers in the city are: (Does not include Internal Revenue Service with employment of approximately 4,000)

Bus Transit is served by TANK.[14]

Covington is served by Cincinnati/Northern Kentucky International Airport (CVG), which is the largest airport in the state, and is hub to passenger airline Delta Air Lines and headquarters of its Delta Private Jets. The airport is one of DHL Aviation's three super-hubs, serving destinations throughout the Americas, Europe, Africa, and Asia, making it the 7th busiest airport in the U.S. and 36th in the world based on passenger and cargo operations. CVG is also a focus city for Frontier Airlines and is the largest O&D airport and base for Allegiant Air, along with home to a maintenance for American Airlines subsidiary PSA Airlines and Delta Air Lines subsidiary Endeavor Air.

According to Covington's 2015 Comprehensive Annual Financial Report,[15] the principal employers in the city are: 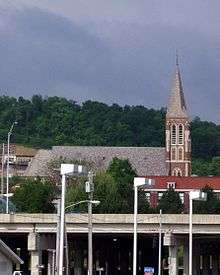 Saint John the Evangelist Church as seen from the east side of I-75. 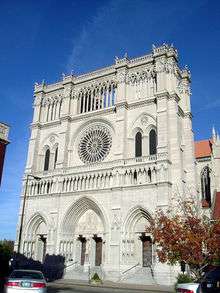 Cathedral Basilica of the Assumption in Covington