The Illustrious Royal Order of Saint Januarius (Italian: Insigne Reale Ordine di San Gennaro) is a Roman Catholic order of knighthood bestowed by the head of the Royal House of Bourbon of the Two Sicilies. It was the last great dynastic collar order to be constituted as a chivalric fraternity, with a limitation to Roman Catholics, and a direct attachment to the dynasty rather than the state. The founder of the Order, Charles VII of Naples, ruled from 1734 until 1759.

Structure of the order

Originally the order had four principal officers, whose duties were to administer its affairs:

A reform of August 17, 1827, limited these duties to certain ceremonial roles at the installation of knights, and no successors were appointed to the then-holders of these offices. 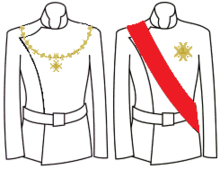 Decoration with collar (left) and with sash and star (right)

The order continues to be awarded today by the two claimaints for the headship of the royal House of Bourbon-Two Sicilies, Prince Pedro, Duke of Calabria and Prince Carlo, Duke of Castro.

Since 1960, the order has been awarded sparingly and total membership has not exceeded eighty, most of the knights being members of royal houses, senior officers of the Sacred Military Constantinian Order of Saint George or Italian grandees.

As of 2016 the Knights appointed by Prince Pedro, Duke of Calabria, his father and grandfather, were:

As of 2014[2] the Knights appointed by Prince Carlo, Duke of Castro, his father and grandfather, were 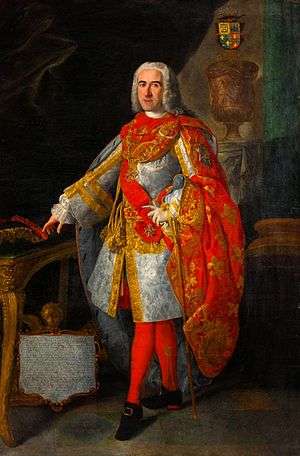 Diego Madariaga wearing the mantle and insignia of the Order