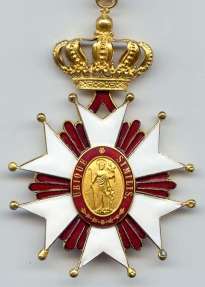 Badge of the Order of Saint Joseph. 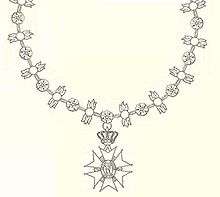 Livery collar of the Order of Saint Joseph.

The Order of Saint Joseph was instituted in 1807 by Ferdinand III, Grand Duke of Tuscany during his reign as Grand Duke of Würzburg. It was transformed into a Tuscan Roman Catholic Dynastic Order in 1817. The constitution of the Order was promulgated in March 1817, with amendments in August 1817. The order was divided into civil and military categories but these are now defunct. It is given to reward services towards Tuscan culture and civilisation and to the Grand Ducal House as a whole. The Order is divided into four levels:

These numbers excluded Sovereigns, Heads of State, and Princes of the Grand Ducal House and other Royal Houses, Cardinals of the Holy Roman Church and Tuscan Metropolitan Archbishops. All had to be Catholics. The number of women members cannot exceed fifty, excluding Princesses of the Grand Ducal and other Royal Houses, wives of Heads of State and Dames of the Order of Saint Stephen. It is permitted for non-nobles to be admitted into the Order of the level of Grand Cross in cases of exceptional merit. Dames wear the same Cross as Knights but from a bow on the left breast. Dame Grand Crosses wear the Cross hanging from a Riband like the Knights but without the Star.

This article is issued from Wikipedia - version of the 1/9/2016. The text is available under the Creative Commons Attribution/Share Alike but additional terms may apply for the media files.