Order of St. Gregory the Great

For the monastic order, see Sylvestrines.

The Pontifical Equestrian Order of St. Gregory the Great (Latin: Ordo Sancti Gregorii Magni, Italian: Ordine di San Gregorio Magno) was established on 1 September 1831, by Pope Gregory XVI, seven months after his election to that seat by the College of Cardinals.[1]

The Order of St. Gregory the Great is one of the five Orders of Knighthood of the Holy See. This special honor is bestowed upon Roman Catholic men and women (and sometimes in rare cases to non-Catholics[2]) in recognition of their personal service to the Holy See and to the Roman Catholic Church, through their unusual labors, their support of the Holy See, and their excellent examples set forth in their communities and their countries.

The Order of St. Gregory the Great has four "classes" in civil and military divisions:

The motto of the Order of St. Gregory the Great is Pro Deo et Principe ("For God and Ruler").

The inaugural brief states, in part, that "gentlemen of proven loyalty to the Holy See who, by reason of their nobility of birth and the renown of their deeds or the degree of their munificence, are deemed worthy to be honored by a public expression of esteem on the part of the Holy See". The end of the brief states that they must progressively maintain, by continued meritorious deed, the reputation and trust they had already inspired, and prove themselves worthy of the honor that had been conferred on them, by unswerving fidelity to God and to the sovereign Pontiff.[3]

The awarding of the Order of St. Gregory the Great presents no particular obligations on the recipients toward the Roman Catholic Church – except for the general ones stated above.

An eight-pointed cross, the insignia of the Order, bears a representation of St. Gregory on the obverse and on the reverse the motto Pro Deo et Principe ("For God and Ruler"). The cross is suspended from a red and gold ribbon. In ecclesiastical heraldry, laymen awarded the high rank of Grand Cross can display a red and gold ribbon surrounding the shield in their personal coats of arms, but the recipients of the lower ranks place an appropriate ribbon below the shield.[4] The difference between the civilian and military insignia is that the former group wears the cross hanging from a green crown of laurel, whereas the latter group wears the cross hanging from a trophy of arms.[5]

A green uniform was later prescribed by Pope Pius IX. The uniform contains a black beaver-felt hat decorated with black silk ribbons, silver metallic twisted rope, buttons and black ostrich feathers. The jacket, made of green wool, is trimmed with silver metallic thread, and has a tail, nine yellow metal buttons in the front and three buttons on the cuffs and is lined with black satin. Finally, the costume contains suspenders, several yellow and red rosettes, white leather gloves, and a short sword with a handle made of mother of pearl with a medallion of the order at the end.

Knights Grand Cross wear a sash and a badge or star on the left side of the breast; Commanders wear a cross around the neck; and Knights wear a smaller cross on the left breast of the uniform: 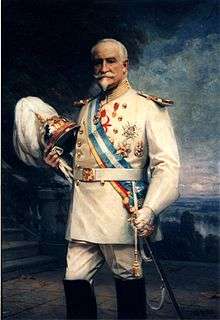 Juan Mariano de Goyeneche y Gamio, 3rd Count of Guaqui and Grandee of Spain, wearing the Grand Cross and sash of the Order of St. Gregory the Great.