Orders, decorations, and medals of the Holy See 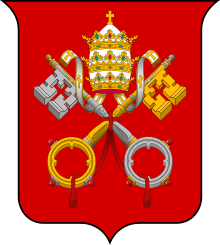 Coats of arms of the Holy See and Vatican City.

The orders, decorations, and medals of the Holy See include titles, chivalric orders, distinctions and medals honoured by the Holy See, with the Pope is the fount of honour, for deeds and merits of their recipients to the benefit of the Holy See, the Catholic Church, or their respective communities, societies, nations and the world at large.

Some of these honours are defunct or currently dormant, while some are still actively conferred.

In general, Papal orders of knighthood refers to the five equestrian orders of the Holy See awarded directly by the Supreme Pontiff as head of the Catholic Church, Holy See and Vatican City State - as temporal sovereign and font of honour (similar to the orders given by other heads of state):

However, the term often includes the Equestrian Order of the Holy Sepulchre, a religious order of chivalry, as it is under the direct protection of the Pope, who is sovereign of the order, and which has a Cardinal as Grand Master.

The term equestrian in this context refers to the nature of these orders as knightly - conferring knighthood on members - derived from the Equestrians (Equites), a social class of Ancient Rome.

Notably, the term Papal order of knighthood does not include the Sovereign Military Order of Malta, which (although it is the only other order of chivalry recognised by the Holy See) it is internationally recognised as being itself sovereign.

Tracing its origins to the dissolution of the Knights Templar, the Military Order of Our Lord Jesus Christ was established in 1319 in the Kingdom of Portugal, recognised by the Papal bull Ad ea ex quibus 15 March 1319 by Pope John XXII.[1] Some historians claim that under the terms of the bull, the Popes created the right to award the order themselves, though the text of the bull does not explicitly cover this right.[2] The view of the Catholic Church is that the Pope is the head of every religious order, and thus he can grant admission to these orders without the permission of the superior general.[3] The Pope's awarding of the Order of Christ motu proprio, brought the Papacy and the Crown of Portugal into conflict on several occasions, as the King of Portugal believed himself to be the only legitimate fons honorum. Protests regarding this conflict were made to Rome as late as 1825.[1]

During a reorganisation of the papal orders in 1905, Pope Pius X made the Supreme Order of Christ the most senior Papal honour. On 15 April 1966, in the Papal bull Equestres Ordinis, Pope Paul VI limited the award to Roman Catholic heads of state in commemoration of significant events where the Pope himself was in attendance. The most recent presentation of the order was to Frà Angelo de Mojana, 77th Prince and Grand Master of the Sovereign Military Order of Malta, in 1987. The last living holder of the order was King Baudouin of Belgium, who died in 1993.[4]

Order of the Golden Spur

The third-highest papal order is the Order of Pius IX, founded 17 June 1847 by Pope Pius IX.[3] The Order of Pius IX is the highest Papal Order currently awarded.[7] There previously existed an Order of Pian knights, founded in the 16th century, which later fell into abeyance. It is not related to this order. The Order of Pius IX is the first of the Papal Orders, by order of precedence, to include different grades. The highest grade is the Collar, followed by the Grand Cross, Commander with Star, Commander, and Knight. The order may be presented to non-Catholic Christians and to non-Christians.[5]

Order of Saint Gregory the Great 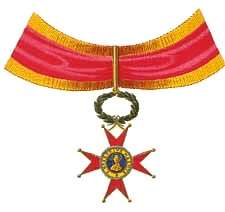 The fourth papal order is the Equestrian Order of St. Gregory the Great. Pope Gregory XVI established the order on 1 September 1831 by the papal brief Quod Summis. It is awarded in four classes, with military and civil divisions. It was initially founded to reward meritorious civic or military service to the Papal States.[3] Through the reforms of 1905, the order was modified so that the classes paralleled those of the Order of Pius IX, excluding the Collar. The order is currently awarded for conspicuous service to the Catholic Church, without regard to religious affiliation.[5] These awards are typically made based on recommendations from diocesan bishops or nuncios for specific services rendered to the Catholic Church. Membership in the Order of St. Gregory does not carry the religious obligations of the military orders, making it the preferred award of merit for individual service to the Catholic Church. Since 1994, women have been appointed as dames in the same classes as men.[8]

Under protection of the Holy See

In addition to the Papal Orders of Knighthood given by the Pope as temporal sovereign and font of honour (similar to the orders given by other heads of state), there are several military religious orders which have existed since the time of the Crusades. Only three of these are recognised by the Holy See, and only the first two as orders of chivalry.[9]

Order of the Holy Sepulchre

The Equestrian Order of the Holy Sepulchre of Jerusalem traces its founding to the First Crusade, although not as an organised crusading order but an association of Knights. After the fall of Jerusalem in 1182, it remained an order of chivalry. In 1489, Pope Innocent VIII suppressed the Order and ruled that it was to be merged with the Knights Hospitaller. In 1496, Pope Alexander VI, restored the Order of Holy Sepulchre to independent status. Alexander VI decreed that the Order would no longer be governed by the office of custodian and further decreed that the senior post of the Order would henceforth be raised to the rank of Grand Master, reserving this title for himself and his successors. In 1847 Pope Pius IX reorganized the order and placed it under the direct protection of the Holy See. In 1949, Pope Pius XII decreed that the Grand Master of the order be a Cardinal appointed directly by the Pope, who is Sovereign of the Order. The Latin Patriarch of Jerusalem is, ex officio, Grand Prior of the order, while the lay head is the Governor-General.[10] The present Cardinal Grand Master is Edwin Frederick O'Brien, who was appointed on 15 March 2012.[11]

The Order of Malta traces its history to the late 11th century, but it first became a religious military order by a bull of Pope Paschal II of 1113. The Grand Master, as of 2013 Matthew Festing, is elected by the professed religious members of the order and serves for life, or until his abdication. Before a person elected as the Grand Master takes the oath of office, the Pope must be informed of the election.[12] The Pope also appoints a cardinal patron and a prelate of the order.[13]

The Teutonic Order was founded as a hospital brotherhood in 1190 at Acre. In 1198 the order became a religious military order of chivalry. However, since 1929 it has been a purely religious order of priests, brothers, and sisters, with a category of twelve honorary knights and an unlimited number of associates, known as Marianer. Its headquarters is in Vienna. The current Grand Master is Bruno Platter.[14]

Historically, many military orders and other chivalric orders were founded in association with the Holy See. Most of them became extinct, were suppressed, or merged with contemporary chivalric orders. Some of them survived under the protection of the Holy See as in the list above. A few of them remained as patrimony of dynastic royal houses. Some of these dynastic orders of knighthood were recognised as Roman Catholic by Papal bulls of the Holy See, and although they are no more directly affiliated with or protected by the Holy See, some of them are still exclusively designated for Catholics.[15]

Prominent examples meeting the above conditions, while also recognised by the International Commission on Orders of Chivalry, include the following:

In any case, in response to a proliferation of self-proclaimed chivalric orders claiming recognition from the Roman Catholic Church, the Holy See's Secretariat of State issued a statement clarifying that "other than its own Equestrian Orders... the Holy See recognises and supports only the Sovereign Military Order of Malta... and the Equestrian Order of the Holy Sepulchre". All other self-styled chivalric orders, the statement continued, "whether of recent origin or mediaeval foundation, are not recognised by the Holy See" and "the Holy See does not guarantee their historical or juridical legitimacy, their ends or organisational structures... to prevent the continuation of abuses which may result in harm to people of good faith, the Holy See confirms that it attributes absolutely no value whatsoever to certificates of membership or insignia issued by these groups, and it considers inappropriate the use of churches or chapels for their so-called 'ceremonies of investiture'."[9]