"Tezuka" redirects here. For the surname, see Tezuka (surname).
In this Japanese name, the family name is Tezuka.

Osamu Tezuka (手塚 治虫, born 手塚 治, Tezuka Osamu, (1928-11-03)3 November 1928 – 9 February 1989) was a Japanese manga artist, cartoonist, animator, film producer, medical doctor and activist. Born in Osaka Prefecture, he is best known as the creator of the manga series Astro Boy, Kimba the White Lion, Black Jack, and Phoenix. His prolific output, pioneering techniques, and innovative redefinitions of genres earned him such titles as "the father of manga", "the godfather of manga" and "the god of manga". Additionally, he is often considered the Japanese equivalent to Walt Disney, who served as a major inspiration during Tezuka's formative years.[1]

Tezuka was the eldest of three children in Toyonaka City, Osaka.[2][3] His nickname was gashagasha-atama (gashagasha is slang for messy, atama means head). His mother often comforted him by telling him to look to the blue skies, giving him confidence. His mother's stories inspired his creativity as well. Tezuka grew up in Takarazuka City, Hyōgo and his mother often took him to the Takarazuka Theatre. The Takarazuka Revue is performed by women, including the male characters. The Takarazuka Revue is known for its romantic musicals usually aimed at a female audience, thus having a large impact on the later works of Tezuka, including his costuming designs. He has said that he has a profound "spirit of nostalgia" for Takarazuka.[4]

Tezuka started to draw comics around his second year of elementary school. Around his fifth year he found a bug named "Osamushi". It so resembled his name that he adopted osamushi as his pen name. He came to the realization that he could use manga as a means of helping to convince people to care for the world. After World War II, he created his first piece of work (at age 17), Diary of Ma-chan and then Shin Takarajima (New Treasure Island), which began the golden age of manga, a craze comparable to American comic books at the time.[5]

Tezuka is a descendent of Hattori Hanzō,[6] a famous ninja and samurai who faithfully served Tokugawa Ieyasu during the Sengoku period in Japan. His son Makoto Tezuka became a film and anime director.[7] Tezuka guided many well-known manga artists such as Shotaro Ishinomori and Go Nagai.

Tezuka enjoyed bug-collecting, entomology, Walt Disney, baseball, and licensed the "grown up" version of his character Kimba the White Lion as the logo for the Seibu Lions of the Nippon Professional Baseball League.[7][8] Tezuka met Walt Disney in person at the 1964 New York World's Fair. In a 1986 entry in his personal diary, Tezuka stated that Disney wanted to hire him for a potential science fiction project. Tezuka was a fan of Superman and was made honorary chairman of the Superman Fan Club in Japan.[9]

Tezuka was an agnostic, but was buried in a Buddhist cemetery in Tokyo.[10]

Tezuka died of stomach cancer on 9 February 1989 in Tokyo.[11] His last words were: "I'm begging you, let me work!", spoken to a nurse who had tried to take away his drawing equipment.[12]

The city of Takarazuka, Hyōgo, where Tezuka grew up, opened a museum in his memory.[3] Stamps were issued in his honor in 1997. Also, beginning in 2003, the Japanese toy company Kaiyodo began manufacturing a series of figurines of Tezuka's creations, including Princess Knight, Unico, the Phoenix, Dororo, Marvelous Melmo, Ambassador Magma and many others. To date three series of the figurines have been released.

His legacy has continued to be honored among Manga artists and animators. Artists such as Hayao Miyazaki (Spirited Away) and Akira Toriyama (Dr. Slump and Dragon Ball)[13] have cited Tezuka as inspiration for their works.

From 2003 to 2009, Naoki Urasawa and Takashi Nagasaki adapted an arc of Astro Boy into the murder mystery series Pluto.[14]

Tezuka was a personal friend (and apparent artistic influence) of Brazilian comic book artist Mauricio de Sousa. In 2012, Maurício published a two-issue story arc in the Monica Teen comic book featuring some of Tezuka's main characters, such as Astro Boy, Black Jack, Sapphire and Kimba, joining Monica and her friends in an adventure in the Amazon rainforest against a smuggling organization chopping down hundreds of trees. This was the first time that Tezuka Productions has allowed overseas artists to use Tezuka's characters.[15]

His complete oeuvre includes over 700 volumes with more than 150,000 pages.[16][17] A complete list of his works can be found on the Tezuka Osamu Manga Museum website.[18]

When he was younger, Tezuka's arms swelled up and he became ill. He was treated and cured by a doctor, which made him want to be a doctor. However, he began his career as a manga artist while a university student, drawing his first professional work while at school. At a crossing point, he asked his mother whether he should look into doing manga full-time or whether he should become a doctor. At the time, being a manga author was not a particularly rewarding job. The answer his mother gave was: "You should work doing the thing you like most of all." Tezuka decided to devote himself to manga creation on a full-time basis. He graduated from Osaka University and obtained his medical degree, but he would later use his medical and scientific knowledge to enrich his sci-fi manga, such as Black Jack.[17][19]

Tezuka's creations include Astro Boy (Mighty Atom in Japan), Black Jack, Princess Knight, Phoenix (Hi no Tori in Japan), Kimba the White Lion (Jungle Emperor in Japan), Unico, Message to Adolf, The Amazing 3 and Buddha. His "life's work" was Phoenix—a story of life and death that he began in the 1950s and continued until his death.[20]

In January 1965, Tezuka received a letter from American film director Stanley Kubrick, who had watched Astro Boy and wanted to invite Tezuka to be the art director of his next movie, 2001: A Space Odyssey (1968). Although flattered by Kubrick's invitation, Tezuka could not afford to leave his studio for a year to live in England, so he had to turn it down. Although he could not work on it, he loved the film, and would play its soundtrack at maximum volume in his studio to keep him awake during long nights of work.[21][22]

Many young manga artists once lived in the apartment where Tezuka lived, Tokiwa-sō. The residents included Shotaro Ishinomori, Fujio Akatsuka, and Abiko Motou and Hiroshi Fujimoto (who worked together under the pen name Fujiko Fujio).[23][24]

Tezuka is known for his imaginative stories and stylized Japanese adaptations of western literature with reading novels and watching films that came from the West. His early works included manga versions of Disney movies such as Bambi.[25] Tezuka's "cinematic" page layouts, influenced by Milt Gross' early graphic novel He Done Her Wrong, which he read as a child, became a common characteristic for many manga artists who followed in Tezuka's footsteps.[26] His work, like that of other manga creators, was sometimes gritty and violent.

Tezuka headed the animation production studio Mushi Production ("Bug Production"), which pioneered TV animation in Japan.[27] The distinctive "large eyes" style of Japanese animation was invented by Tezuka,[28] drawing inspiration from Western cartoons and animated films of the time such as Betty Boop, Mickey Mouse and other Disney movies. 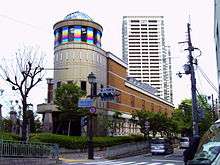 The Osamu Tezuka Manga Museum (宝塚市立手塚治虫記念館, lit. "Takarazuka City Tezuka Osamu Memorial Hall"), located in the city of Takarazuka, Hyōgo Prefecture, was inaugurated on April 25, 1994, and has three floors (15069.47 ft²). In the basement there is an "Animation Workshop" in which visitors can make their own animation, and a mockup of the city of Takarazuka and a replica of the table where Osamu Tezuka worked.

On the ground floor on the way before the building's entrance, are imitations of the hands and feet of several characters from Tezuka (as in a true walk of fame) and on the inside, the entry hall, a replica of Princess Knight's furniture. On the same floor, is a permanent exhibition of manga and a room for the display of anime. The exhibition is divided into two parts: Osamu Tezuka and the city of Takarazuka and Osamu Tezuka, the author.

On the first floor are held several exhibitions and are available a manga library, with five hundred works of Tezuka (some foreign editions are also present), a video library and a lounge with a decor inspired by Kimba the White Lion.

There is also a center of glass that represents the planet Earth and is based on a book written by him in his childhood called "Our Earth of Glass". 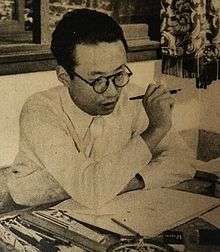