This article is about the prefecture. For the ward in the city of Kobe, see Hyōgo-ku, Kobe. 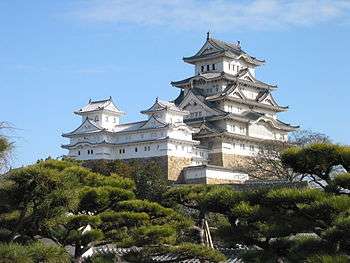 Hyōgo Prefecture (兵庫県, Hyōgo-ken) is a prefecture of Japan located in the Kansai region on Honshu island.[1] The capital is Kobe.[2]

In 1180, near the end of the Heian Period, Emperor Antoku, Taira no Kiyomori, and the Imperial court moved briefly to Fukuhara, in what is now the city of Kobe. There the capital remained for five months.

Himeji Castle, a UNESCO World Heritage Site, is in the city of Himeji.

Southern Hyōgo Prefecture was severely devastated by the 6.9 Mw Great Hanshin earthquake of 1995, which destroyed major parts of Kobe and Awaji, as well as Takarazuka and neighboring Osaka Prefecture, killing nearly 6,500 people. 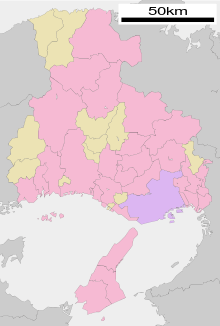 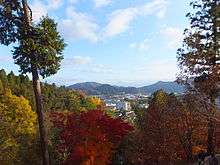 Hyōgo has coastlines on two seas: to the north, the Sea of Japan, to the south, the Seto Inland Sea. On Awaji Island, Hyōgo borders the Pacific Ocean coastline in the Kii Channel. The northern portion is sparsely populated, except for the city of Toyooka, and the central highlands are only populated by tiny villages. Most of Hyōgo's population lives on the southern coast, which is part of the Osaka-Kobe-Kyoto metropolitan area. Awaji is an island that separates the Inland Sea and Osaka Bay, lying between Honshu and Shikoku.

Summertime weather throughout Hyōgo is hot and humid. As for winter conditions in Hyōgo, the north of Hyōgo tends to receive abundant snow, whilst the south receives only the occasional flurry.

The city of Akō and the only town in Akō District (Kamigōri), were scheduled to merge and the city would still retain the name Akō. Akō District would be defunct if the merger was successful.[5] However, the merger hasn't taken place.

Hyōgo Prefecture has many heavy industries, metal and medical, and Kobe Port is one of the largest ports in Japan.

Important Preservation Districts for Groups of Historic Buildings in Japan

The sports teams listed below are based in Hyōgo.

A popular troupe of Takarazuka Revue plays in Takarazuka.

The north of Hyogo Prefecture has sightseeing spots such as Kinosaki Onsen, Izushi, and Yumura Onsen, and the matsuba crab, and Tajima beef are both national delicacies.[6] 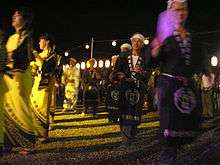 In 1981, a sister state agreement was drawn up between Hyogo and the state of Western Australia in Australia.[7] To commemorate the 10th anniversary of this agreement in 1992, the Hyogo Prefectural Government Cultural Centre was established in Perth.[8]