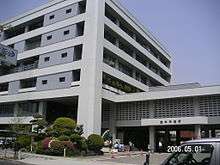 Toyonaka (豊中市, Toyonaka-shi) is a city located in Osaka Prefecture, Japan. The city was founded on October 15, 1936.

Toyonaka is a residential area of Osaka Prefecture, and includes Senri New Town.

The city is easy to reach through various modes of transportation, and many of its residents commute daily into Osaka City to work. Osaka University and Osaka Music College have their campuses in Toyonaka.

The Consulate-General of Russia in Osaka is located in Toyonaka.[1]

From ancient times until today Toyonaka has had a sizable population. The events inciting the Jōkyū War were related to an event in Toyonaka. A case on a matter between a favorite lady of the retired emperor Emperor Go-Toba and a local jitō was wrongly resolved, and then the former had the Emperor redecide the case in her favor.

Osaka International Airport is partially located in Toyonaka including its terminal, although it is more commonly associated with the city of Itami.