Osaka University (大阪大学, Ōsaka daigaku), or Handai (阪大, Handai), is a national university located in Osaka, Japan. It is the sixth oldest university in Japan as the Osaka Prefectural Medical College, and one of Japan's National Seven Universities. Numerous prominent scientists have worked at Osaka University such as the Nobel Laureate in Physics Hideki Yukawa.

It is the 4th best ranked higher education institution in Japan (96th worldwide) in 2016 by the Academic Ranking of World Universities.

Academic traditions of the university reach back to Kaitokudō (懐徳堂), an Edo-period school for local citizens founded in 1724, and Tekijuku (適塾), a school of Rangaku for samurai founded by Ogata Kōan in 1838. The spirit of the university's human sciences is believed to be intimately rooted in Kaitokudo, whereas that of the natural and applied sciences, including medicine, is widely believed to be based on Tekijuku.[3]

Osaka University traces its origin back to 1869 when Osaka Prefectural Medical School was founded in downtown Osaka. The school was later transformed into the Osaka Prefectural Medical College with university status by the University Ordinance (Imperial Ordinance No. 388 of 1918) in 1919. The college merged with the newly founded College of Science to form Osaka Imperial University（大阪帝國大学） in 1931. Osaka Imperial University was inaugurated as the sixth imperial university in Japan. As part of the University, Osaka Technical College was later included to form the school of Engineering two years later. The university was eventually renamed Osaka University in 1947.

Merging with Naniwa High School and Osaka High School as a result of the government's education system reform in 1949, Osaka University started its postwar era with five faculties: Science, Medicine, Engineering, Letters, and Law. After that, faculties, graduate schools, and research institutes have been successively established. Among these are the School of Engineering Science, the first of its kind among Japanese national universities, which draws upon the excellence of both sciences and engineering disciplines, and the School of Human Sciences, which covers its cross-disciplinary research interest as broadly as psychology, sociology, and education. Built on the then-existing faculties, 10 graduate schools were set up as part of the government's education system reform program in 1953. Two graduate schools, the Graduate School of Language and Culture and the cross-disciplinary and cross-institutional Osaka School of International Public Policy, add to the list, making the number of graduate schools reach 12 in 1994.

In 2009, Osaka University implemented a major revision of its website. The result is a website much more accessible and informative to persons not versed in the Japanese language — a site much more user-friendly to international exchange students, international researchers, and expatriates living in the Osaka area. Currently, thanks to the work of the "Creative Unit," virtually all Osaka University's web pages come in pairs — a Japanese page and the same page in English. These pairings include frequent updates on symposiums, seminars, and other events open to staff, students and, often, the general public. 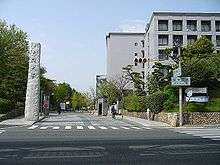 Suita, Toyonaka and Minoh are the university's three campuses. Home to the university's headquarters, the Suita campus extends across Suita city and Ibaraki city in Osaka prefecture. The Suita campus houses faculties of Human Sciences, Medicine, Dentistry, Pharmaceutical Sciences, and Engineering. It contains the Graduate School of Frontier Biosciences and a portion of the Graduate School of Information Science and Technology. The campus is also home to the Osaka University Hospital and the Nationwide Joint Institute of Cybermedia Center and Research Center for Nuclear Physics. Because access to the campus by public transportation is relatively inconvenient, automobiles, motorcycles, and bicycles are commonly seen within the campus. While sports activities are primarily concentrated on the Toyonaka campus, tennis activities are concentrated on the Suita campus because of its many tennis facilities.

The Toyonaka campus is home to faculties of Letters, Law, Economics, Science, and Engineering Science. It is also the academic base for Graduate Schools of International Public Policy, Language and Culture, (a portion of) Information Science, and the Center for the Practice of Legal and Political Expertise. All freshmen attend classes on the Toyonaka campus during their first year of enrollment.

In addition to these three campus, the former Nakanoshima campus, the university's earliest campus located in downtown Osaka, served as the hub for the faculty of medicine until the transfer to the Suita campus was completed in 1993.[4] Starting from April 2004, the Nakanoshima campus has been transformed into the "Nakanoshima Center", serving as a venue for information exchange, adult education classes, and activities involving academic as well as non-academic communities.

Handai is one of the most prestigious universities in Japan. It can be seen in the several rankings such as shown below.

The university has been ranked 3rd in 2009 and 4th in 2008 and 2010 in the ranking "Truly Strong Universities" by Toyo Keizai.[8] In another ranking, Japanese prep school Kawaijuku ranked Handai as the 3rd best university in Japan.[9]

Weekly Diamond also reported that Handai has the 7th highest research standard in Japan in terms of research funding per researchers in COE Program.[30] In the same article, it's also ranked 16th in terms of the quality of education by GP funds per student.

In addition, Nikkei Shimbun on 2004/2/16 surveyed about the research standards in Engineering studies based on Thomson Reuters, Grants in Aid for Scientific Research and questionnaires to heads of 93 leading Japanese Research Centers, and Handai was placed top (research planning ability 2nd/informative ability of research outcome 5th/ability of business-academia collaboration 9th) in this ranking.[33]

According to the QS World University Rankings of September 2013, Handai was ranked 55th in the world, and 3rd in Japan.[34]

Furthermore, Handai got the 4th place at the number of patents accepted (171) during 2009 among Japanese Universities.[35]

Handai Law School is considered as one of top law schools in Japan, as it was ranked 7th in terms of the number of successful candidates of Japanese Bar Examination in 2010.[36]

According to the Weekly Economist's 2010 rankings, graduates from Handai have the 7th best employment rate in 400 major companies in Japan.[37]

École des Mines de Paris ranks Handai as 92nd in the world in 2011 in terms of the number of alumni listed among CEOs in the 500 largest worldwide companies.[19]

Osaka University is one of the most selective universities in Japan. Its entrance difficulty is usually considered as one of the highest in Japan.[38][39]

Nikkei BP has been publishing a ranking system "Brand rankings of Japanese universities" every year, composed by the various indications related to the power of brand, and Handai was 2nd in 2010 in Kansai Area.[40][12]