Osaka Prefecture (大阪府, Ōsaka-fu) is a prefecture located in the Kansai region on Honshu, the main island of Japan.[1] The capital is the city of Osaka. It is the center of Osaka-Kobe-Kyoto area.[2] Osaka is one of the two "urban prefectures" (府, fu) of Japan, Kyoto being the other (Tokyo became a "metropolitan prefecture", or to, in 1941).

Until the Meiji Restoration, the area of Osaka prefecture was known as Kawachi, Izumi,[3][4] and Settsu provinces.[5]

Osaka Prefecture was created on June 21, 1868, at the very beginning of the Meiji era.[6] During the instigation of Fuhanken Sanchisei in 1868, the prefecture received its suffix fu, designating it as an urban prefecture.

On September 1, 1956, the city of Osaka was promoted to a city designated by government ordinance and thereby divided into 24 wards.

In 2000, Fusae Ota became Japan's first female governor when she replaced Knock Yokoyama, who resigned after prosecution for sexual harassment.[7]

On April 1, 2006: the city of Sakai was promoted to a city designated by government ordinance and thereby divided into seven wards.

In 2008, Tōru Hashimoto, previously famous as a counselor on television, was elected at the age of 38 as the youngest governor in Japan.

In 2010, the Osaka Restoration Association was created with backing by Governor Tōru Hashimoto, attempting to reform Osaka Prefecture into Osaka Metropolis reducing affiliated organizations of Osaka Prefecture and the City of Osaka.

In the 2011 local elections the association was able to win the majority of the prefectural seats.

Osaka Prefecture neighbors the prefectures of Hyōgo and Kyoto in the north, Nara in the east and Wakayama in the south. The west is open to Osaka Bay. The Yodo and Yamato Rivers flow through the prefecture.

Prior to the construction of Kansai International Airport, Osaka was the smallest prefecture in Japan. The artificial island on which the airport was built added enough area to make it slightly larger than Kagawa Prefecture.[8][9]

As of 1 April 2012, 11% of the total land area of the prefecture was designated as Natural Parks, namely Kongō-Ikoma-Kisen and Meiji no Mori Minō Quasi-National Parks and Hokusetsu and Hannan-Misaki Prefectural Natural Parks.[10] 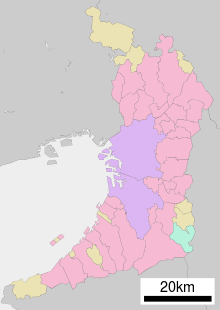 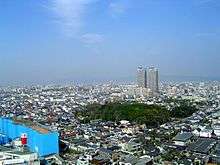 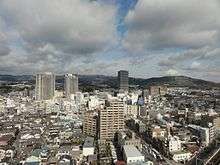 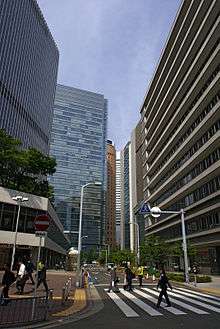 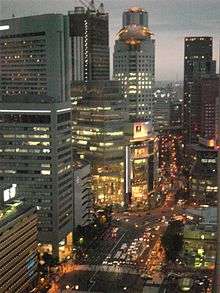 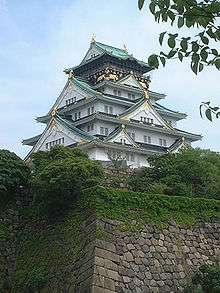 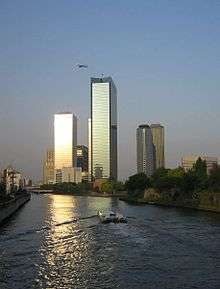 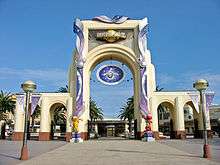 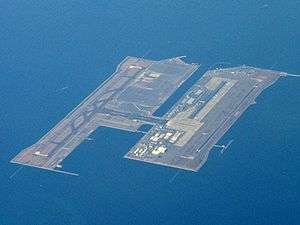 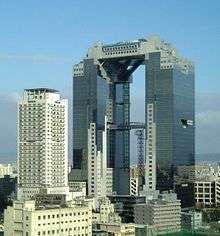 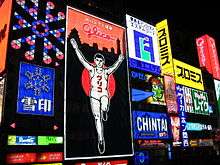 The gross prefecture product of Osaka for the fiscal year 2004 was ¥38.7 trillion, second after Tokyo with an increase of 0.9% from the previous year. This represented approximately 48% of the Kinki region. The per capita income was ¥3.0 million, seventh in the nation.[11] Commercial sales the same year was ¥60.1 trillion.[12]

Overshadowed by such globally renowned electronics giants as Panasonic and Sharp, the other side of Osaka's economy can be characterized by its Small and Medium Enterprises (SMEs) activities. The number of SMEs based in Osaka in 2006 was 330,737, accounting for 99.6% of the total number of businesses in the prefecture.[13] While this proportion is similar to other prefectures (the average nationwide was 99.7%), the manufactured output of the SMEs amounted to 65.4% of the total within the prefecture, a rate significantly higher than Tokyo's 55.5%, or Kanagawa's 38.4%.[14] One model from Osaka of serving the public interest and restimulating the regional economy, combined with industry-education cooperation efforts, is the Astro-Technology SOHLA,[15] with its artificial satellite project.[16] Having originally started from a gathering of Higashiosaka based SMEs, Astro-Technology SOHLA has not only grown into a Kansai region-wide group but has also won support from the government, through technology and material support from Japan Aerospace Exploration Agency (JAXA),[17] and financial support from NEDO.[18][19]

The Osaka Securities Exchange, specializing in derivatives such as Nikkei 225 Futures, is based in Osaka.

There are many electrical, chemical, pharmaceutical, heavy industry, food, and housing companies in Osaka Prefecture.

The sports teams listed below are based in Osaka.

The symbol of Osaka Prefecture, called the sennari byōtan or "thousand gourds," was originally the crest of Toyotomi Hideyoshi, the feudal lord of Osaka Castle.