Takarazuka from the Muko River

Takarazuka is nestled between the Rokko Range to the west and Nagao Range to the north with the Muko River running through the center of the city.

A bedroom community for Osaka and Kobe, there are quiet, upscale residential neighborhoods like Nigawa, Sakasegawa, and Hibarigaoka.

Known as the inner parlor of Kansai, Takarazuka is famous for the Takarazuka Revue, hot springs, and the Takarazuka Tourism Fireworks Display held since 1913. It is also famous as a choice residential area along with Ashiya and Nishinomiya.

At one time, the idea was raised of merging Takarazuka with Itami, Kawanishi, and Inagawa, but it is currently on hold.

HI-LEX Corporation, a manufacturer of remote-controlling cables and accessories for multiple applications is headquartered in the city.[2] 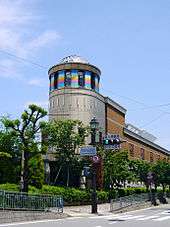 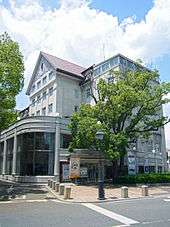 Railways connect the city to other cities in the region including Osaka. Takarazuka Station, serving all railway lines in the city listed below, plays an important role as the city's central station.