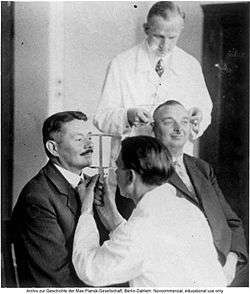 Otmar von Verschuer (rear) supervises the measurement of two men's head circumference as part of an anthropometric study of heredity.

He was regarded as a pioneer in the twin methodology in genetics research and in the study of the inheritance of diseases and anomalies,[1] and was a prominent eugenicist with an interest in racial hygiene and an advocate of compulsory sterilization programs in the first half of the 20th century.[2][3] Like many other eugenicists in Germany, the United States, the United Kingdom and the Nordic countries, he was successful in redefining himself as a geneticist in the postwar era. During the 1950s and 1960s he was noted for research on the effects of nuclear radiation on humans and for his warnings against the possibility of creating "scientifically improved" human beings offered by genetic science.

Verschuer was the director of the Institute for Genetic Biology and Racial Hygiene from 1935 to 1942 and director of the Kaiser Wilhelm Institute of Anthropology, Human Heredity, and Eugenics from 1942 to 1948. From 1951 to 1965 he was Professor of Human Genetics at the University of Münster, where he also served as Dean of the Faculty of Medicine. At Münster he established one of the largest centers of genetics research in West Germany, and remained one of the world's most prominent genetics researchers until his death. He became Professor Emeritus in 1965. In 1952 he was elected President of the German Anthropological Association. His son Helmut von Verschuer was a high-ranking official of the European Commission.

Otmar von Verschuer was born into a noble family originally from Gelderland, Netherlands. From birth he held the title of Freiherr (baron), a title that had been granted to several family branches by the Holy Roman Emperor, the Dutch king, and the elector of Hesse. His father Hans von Verschuer was a businessman. He was mainly of Dutch, German, and Swedish descent, and was a descendant of the House of Stuart through his 6th great grandmother Brita Stuart, a Swedish noblewoman of Scottish descent.

He served in the First World War and had been promoted to first lieutenant by 1918. From 1919 he studied medicine at the University of Marburg. He earned a doctorate in medicine at LMU in 1923 and a habilitation at the University of Tübingen in 1927. In 1927 he became head of department for human genetics at the Kaiser Wilhelm Institute of Anthropology, Human Heredity, and Eugenics.

Verschuer during the Nazi era

In 1935 Verschuer became a member of the congregation of the anti-Nazi pastor Otto Fricke, a leading member of the Confessing Church. He also maintained a close friendship with his relative Adam von Trott zu Solz, a leading resistance figure. Despite his proximity to the Confessing Church, he joined the Nazi Party in 1940, although he wasn't actively involved with politics.

In the late stages of the Second World War, Verschuer directly or indirectly started to use research material obtained in the Auschwitz camp, mainly through his former student Josef Mengele, who served there as a camp physician.[4] Verschuer was never tried for war crimes despite many indications that he not only was fully cognisant of Mengele's work at Auschwitz, but even encouraged and collaborated with Mengele. In a report to the German Research Council (Deutsche Forschungsgemeinschaft; DFG) from 1944, Verschuer talked about Mengele's assistance in supplying the KWIfA with some "scientific materials" from Auschwitz:

My assistant, Dr. Mengele (M.D., Ph.D.) has joined me in this branch of research. He is presently employed as Hauptsturmführer and camp physician in the concentration camp at Auschwitz. Anthropological investigations on the most diverse racial groups of this concentration camp are being carried out with permission of the SS Reichsführer [Himmler]; the blood samples are being sent to my laboratory for analysis.

Verschuer also noted in the report that the war conditions had made it difficult for the KWIfA to procure "twin materials" for study, and that Mengele's unique position at Auschwitz offered a special opportunity in this respect. In the summer of 1944, Mengele and his Jewish slave assistant Dr. Miklós Nyiszli sent other "scientific materials" to the KWIfA, including the bodies of murdered Gypsies, internal organs of dead children, skeletons of two murdered Jews, and blood samples of twins infected by Mengele with typhus.

He was accepted during the war as a member of the American Eugenics Society, a position he kept until his death.

As the war was drawing to a close in 1945, Verschuer moved the files of the KWIfA into the Western part of Germany, hoping for a more favorable response from the advancing Allied armies than from the advancing Soviet Army. In late 1945 or early 1946 he petitioned the mayor of Frankfurt to allow him to reestablish the KWIfA. However the commission in charge of rebuilding the Kaiser Wilhelm Gesellschaft decreed that "Verschuer should be considered not as a collaborator, but one of the most dangerous Nazi activists of the Third Reich." The KWIfA was not reestablished.

In 1951, Verschuer was awarded the prestigious professorship of human genetics at the University of Münster, where he established one of the largest centers of genetics research in West Germany. Like many "racial hygienists" of the Nazi period, and many American eugenicists, Verschuer was successful in redefining himself as a genetics researcher after the war, and avoided the taint of his work with Nazi eugenics. Many of his wartime students were similarly appointed to top positions in universities of Erlangen, Frankfurt, Düsseldorf, and Münster.

In his denazification hearing, Verschuer was deemed to be a Nazi fellow traveler (Mitläufer, a relatively mild categorization meaning someone who was neither a supporter or member of the regime nor an active opponent), and fined 600 Reichsmark. He was never prosecuted for his research activities during the war. Leo Alexander who investigated the case concluded that no solid evidence could be found, and considered it likely that Verschuer had destroyed any possibly incriminating material.

During the 1950s and 1960s, Verschuer led major research projects on the effects of nuclear radiation on humans. Deeply religious, he also concerned himself with questions of Christian ethics, and argued that eugenics must be based on human dignity and love for mankind; according to historian Sheila F. Weiss he "turned his back on" Nazi beliefs. In the 1960s he warned against human geneticists trying to create "scientifically improved" human beings.[5]

Verschuer died in 1969 in an automobile accident.

Regarding personal names: Freiherr is a former title (translated as Baron), which is now legally a part of the last name. The feminine forms are Freifrau and Freiin.