The Austrian Academy of Sciences (German: Österreichische Akademie der Wissenschaften) is a legal entity under the special protection of the Republic of Austria. According to the statutes of the Academy its mission is to promote the sciences and humanities in every respect and in every field, particularly in fundamental research. In 2009, the Austrian Academy of Sciences was ranked 82nd among the 300 topmost research institutions in the world, based on its internet presence, by Webometrics Ranking of World Research Centers.[1]

In 1713, Gottfried Wilhelm Leibniz suggested to establish such an Academy, inspired by the Royal Society and the Académie des Sciences. The "Kaiserliche Akademie der Wissenschaften in Wien" was finally established by Imperial Patent on May 14, 1847.

The Academy soon began extensive research. In the humanities the Academy started with researching and publishing important historical sources of Austria. Research in natural sciences also covered a wide variety of topics.

The 1921 federal law guaranteed the legal basis of the Academy in the newly founded First Republic of Austria. And from the mid-1960s onwards it became the country's leading institution in the field of non-university basic research.

Among the Academy's numerous publications are the Corpus Scriptorum Ecclesiasticorum Latinorum and eco.mont – Journal on Protected Mountain Areas Research and Management. 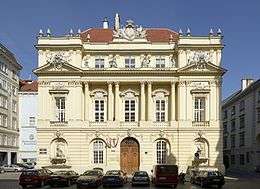 The Academy of Sciences has established more than 25 institutions. In 2012, a reorganization prompted the outsourcing of various institutions to Universities as well as mergers. The Academy's institutes are split into two major divisions, one for mathematics and natural sciences (mathematisch-naturwissenschaftliche Klasse) and one for humanities and social sciences (philosophisch-historische Klasse).

During his term as president of the Academy (1991–2003), Prof. Werner Welzig initiated the establishment of the Galerie der Forschung.[3] In 2005 the Gallery organised its pilot event "Mapping controversies: the case of the genetically modified food",[4] which was staged in the Alte Aula in Vienna.