Martial race was a designation created by Army officials of British India after the Indian Rebellion of 1857, where they classified each caste into one of two categories, 'martial' and 'non-martial'. The ostensible reason was that a 'martial race' was typically brave and well-built for fighting,[1] while the 'non-martial races' were those whom the British believed to be unfit for battle because of their sedentary lifestyles. However, an alternative hypothesis is that British-trained Indian soldiers were among those who rebelled in 1857 and thereafter recruitment policy favoured castes which had remained loyal to the British and diminished or abandoned recruitment from the catchment area of the Bengal army.[2] The concept already had a precedent in Indian culture as one of the four orders (varnas) in the Vedic social system of Hinduism is known as the Kshatriya, literally "warriors."[3]

In their attempts to assert control in India, the British faced fierce resistance in some regions while easily conquering others. British officials sought 'martial races' accustomed to hunting, or from agricultural cultures from hilly or mountainous regions with a history of conflict. Others were excluded due to their 'ease of living' or branded as seditious agitators.[4] The doctrine of 'martial races' postulated that the qualities that make a useful soldier are inherited and that most Indians, with the exception of the specified groups, did not have the requisite traits that would make them warriors.[5]

The British recruited heavily from the 'martial races' for service in the colonial army. Sensing the inequalities and fierce loyalty to one's tribe or group of the diverse native peoples of the subcontinent, the British found opportunities to use it to their own great advantage. These already wide divides were a fertile breeding ground to inculcate pride in one's identity based on 'race'. This served the British in two ways. On the one hand it made sure that there was no repetition of the Indian rebellion of 1857 by ensuring there was no unity among the different subjects of the Raj. On the other hand, it encouraged a sense of competition among the different 'races'.

British general and scholar Lieutenant-General Sir George MacMunn (1869–1952) noted in his writings "It is only necessary for a feeling to arise that it is impious and disgraceful to serve the British, for the whole of our fabric to tumble like a house of cards without a shot being fired or a sword unsheathed".[6] To this end, it became British policy to recruit only from those tribes whom they classified as members of the 'martial races', and the practice became an integral part of the recruitment manuals for the Army in the British Raj. According to Jeffrey Greenhut, "The Martial Race theory had an elegant symmetry. Indians who were intelligent and educated were defined as cowards, while those defined as brave were uneducated and backward."[7]

The British regarded the 'martial races' as valiant and strong but also intellectually inferior, lacking the initiative or leadership qualities to command large military formations.[8] They were also regarded as politically subservient or docile to authority.[9] For these reasons, the martial races theory did not lead to officers being recruited from them; recruitment was based on social class and loyalty to the British Raj.[10] One source calls this a "pseudo-ethnological" construction, which was popularised by Frederick Sleigh Roberts, and created serious deficiencies in troop levels during the World Wars, compelling them to recruit from 'non-martial races'.[11] Winston Churchill was reportedly concerned that the theory was abandoned during the war and wrote to the Commander-in-Chief, India that he must, "rely as much as possible on the martial races".[12] After Indian Independence, the Indian Army abandoned this theory and recruitment took place without discrimination.

Critics of the theory state that the Indian rebellion of 1857 may have played a role in reinforcing the British belief in it. During this event the troops from the Bengal Native Infantry led by sepoy Mangal Pandey mutinied against the British. The Bengal troopers were recruits drawn from the martial stock of Bhumihars and Rajputs of Bihar and eastern Uttar Pradesh. However, the loyal Pashtuns, Punjabis, Gurkhas, Kumaoni/Kumaunis and Garhwalis did not join the mutiny, and fought on the side of the British Army. From then on, this theory was used to the hilt to accelerate recruitment from among these 'races', whilst discouraging enlistment of 'disloyal' troops and high-caste Hindus who had sided with the rebel army during the war.[13]

Some authors, such as Heather Streets, argue that the military authorities puffed up the images of the martial soldiers by writing regimental histories, and by extolling the kilted Scots, kukri-wielding Gurkhas and turbaned Sikhs in numerous paintings.[14] Richard Schultz, an American author, has claimed the martial race concept as a supposedly clever British effort to divide and rule the people of India for their own political ends.[15]

The hillmen - Kumaonis, Garhwalis, Dogras and Gorkhas - were initially a great impediment to the establishment of the British Empire, but once they gave their loyalty to the British they helped them greatly in their administration and were thus given the status of martial race. Kumaonis had helped the British in their efforts against the Gurkhas in the Nepal War. When they were observed by the British to be fighting on both sides—the British as well as the Gorkha side—their valour was given recognition by the British and they were included in the British Army. It is interesting to note that the 3rd Gorkha Rifles was known as the Kumaon battalion when it was formed, and included Kumaonis and Garhwalis along with the Gorkhas. The Kumaonis, once accepted as a martial race, were themselves to be recruited in the Hyderabad regiment and displace the native troops, ultimately becoming the Kumaon Regiment after the independence of India. 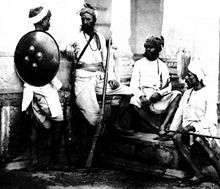 "Rajputs" (anonymous, c.1860) From the collection of the British Library 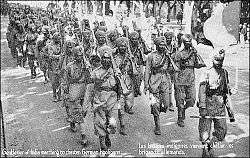 French postcard depicting the arrival of 15th Sikh Regiment in France during World War I. The post card reads, "Gentlemen of India marching to chasten the German hooligans" 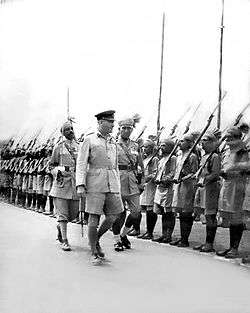 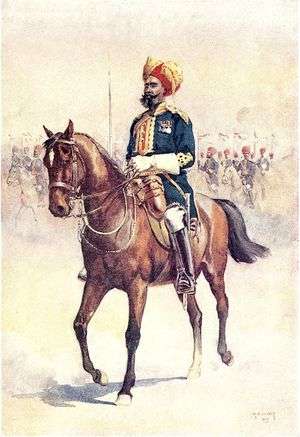 British-declared martial races in the Indian subcontinent included some groups that were officially designated instead as "agricultural tribes" under the provisions of the Punjab Land Alienation Act of 1900. These terms were considered to be synonymous when the administration compiled a list in 1925. Among the communities listed as martial were:[16]

Communities that were at various times classified as martial races include:

The recruitment of 'Madrassis' for infantry only took place during the Second World War when large numbers of troops were required to defend the British Empire in the form of a newly raised Madras Regiment. The Nairs of Kerala were initially included in the list, however after the Nairs of Travancore rebelled against the British under Velu Thampi Dalawa, they were recruited in lower numbers.

The caste system in India is a system of social stratification which has pre-modern origins, was transformed by the British Raj,and is today the basis of educational and job reservations including Indian military in India.[27] However,the Hindu caste system is an ancient cultural tradition still believe and implement by present day India. Hindus believe that only a group of people made from god Purush hands are able to fight and command an army that's why most of the Indian army recruitments are done from so-called superior or gods own chosen racial (warrior) group Kshatriyas. Most of low-rank officers and sepoys are recruited from other religious groups like Muslims and Sikhs etc and worked under superior racial groups, discrimination and caste issues arise time to time in Indian army between superiors and subordinates.[28][29] This racism and caste system is the base of Indian army's war crimes,[30] atrocities and terrorism[31] in Kashmir and other parts of India who want freedom from Indian union instead of living under so-called superior racial groups.