Palanpur is a city and a municipality of Banaskantha district in the Indian state of Gujarat. Palanpur is the largest city and the administrative headquarters of the district.

Palanpur in early times is said to have been called Pralhadan Patan, and to have been founded by Pralhadan Dev, brother of Dharavarsh Parmar of Paramara dynasty of Chandravati; it is said to have been desolate two centuries before the beginning of the Samvat era (57 B.C.). It was afterwards re-peopled by Palansi Chauhan from whom it took its modern name. Others say that it was founded by Pal Parmar whose brother Jagdev founded nearby Jagana village.[1]

The history of Palanpur starts with its mention in its relation to historic city of Chandravati ruled by Paramara dynasty. The town was re-peopled ruled by Chauhans around thirteenth century. At the start of the seventeenth century, the Palanpur State was taken over by Jhalori dynasty of Pashtun Lohani tribe which was founded in 1373 and ruled from Jhalor. The dynasty came into historical prominence during the period of instability that followed the demise of Mughal Emperor Aurangzeb in the early 18th century. It was overrun soon afterwards by the Marathas; the Lohanis followed the trend of seeking recourse in the British East India Company against them and finally entered the subsidiary alliance system in 1817, along with all other neighbouring states, becoming a British protectorate.[1] After independence of India in 1947, Palanpur State was dissolved in 1949 and merged with Union of India as a part of Bombay State. Subsequently Palanpur became the capital of Banaskantha district of Gujarat.[2]

In Summer, it is hot and humid with an average temperature of 42 Degrees with hot sandy winds. The temperature sometimes reaches 46 Degrees. However just before monsoon it becomes swelteringly hot along with humidity. In Winter, it's 5 to 15 degrees, which is quite cold as compared to other cities in Gujarat and in Monsoon, the average rainfall is about 20 to 30  inches per season. 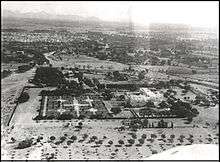 An aerial view of Jorawar Palace, 1936 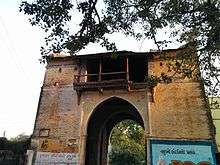 Mira Gate, the only surviving gate of city walls

In 1750 (Samvat 1806), Bahadur Khan built a brick and mortar city-wall, the Nagarkot of Palanpur. It was 3 miles round, 17 to 20 feet high and 6 feet broad with seven bastioned gateways,and, at the corners, round towers armed with guns. The gateways of the city-walls were Delhi Darwaja, Gathaman Darwaja, Malan Darwaja, Mira Darwaja, Virbai Darwaja, Salempura Darwaja, Sadarpur Darwaja or Shimla Darwaja. Only Mira Darwaja survives today.

Sher Muhammad Khan attended the coronation ceremony of King George V in Delhi in 1910 and built a club named after him in 1913. In 1918, his successor Tale Muhammad Khan constructed Kirti Stambh, a 22 metre tower near the railway station commemorating the gallantry of his father and the history of town and his dynasty. He also built Balaram Palace between 1922 to 1936 and later Jorawar Palace (Currently used as Judicial Court) also. In 1939, he also built Shashivan, formerly Jahanara Baug, a garden to commemorate his second marriage with a daughter of an Australian businessman.

The old marketplaces are Nanibazar, Moti Bazar and Dhalvas. Apart from Shahshivan, Chaman Bag is a major public garden in the town. Early Jhalori ruler Malik Mujahid Khan built Mansarovar, a lake dedicated to his queen Manbai Jadeja, in 1628. 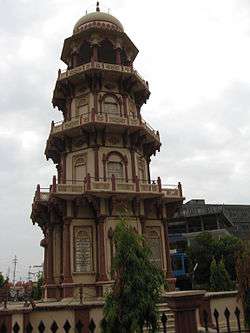 Palanpur has several temples dedicated to Hinduism and Jainism.

Dairy, textile, diamond polishing and marble are major industries of Palanpur. Banas Dairy is one of the largest dairy in the state. The diamond polishing and evaluation industry across India and abroad is dominated by Palanpuri Jain diaspora. Palanpuri Ittars are popular for their fragrance and earned the nickname 'city of flowers' to the town.

Surmandir is the first Multiplex of north Gujarat and is now operated by Big Cinemas. Other single screen cinemas are City Light and Movie World.

Palanpur is an educational hub of Banaskantha; students from nearby villages come to schools and colleges.

During rule of Jhalori Nawabs, Palanpur became well known for Gujarati ghazals and poetry. Samosas are popular snack in the town.

The town being the headquarters of Banaskantha district is well-connected by road and rail.

Palanpur Railway Station, on the Jaipur-Ahmedabad line, comes under the administrative control of Western Railway zone of the Indian Railways. It has direct rail links on the broad gauge to the cities of Chennai, Thiruvananthapuram, Mysore, Bangalore, Pune, Mumbai, Jaipur, Jodhpur, Delhi, Dehradun, Muzaffarpur, Bareilly and Jammu. It is connected to most of the cities and towns in Gujarat such as Ahmedabad, Surat, Vadodra, Bhuj, Rajkot, Jamnagar and Porbandar.Indian Railways’ proposal to double the broad gauge line between Palanpur and Samakhiali has received government backing.The doubling will benefit the districts of Kutch, Patan and Banaskantha in the state of Gujarat.

National Highway 14 connecting Beawar in Rajasthan with Radhanpur in Gujarat passes through Deesa-Palanpur ,thus connecting it with the cities of Pali, Sirohi and Abu Road. State Highways SH 712, SH 132 pass through Palanpur and connect it with nearby towns in Gujarat. State Highway SH 41 connects it with Mehsana & Ahmedabad.

Nearby places of interest