Palanpur State was a princely state of India during the British Raj. It was a Salute state with the Nawab of Palanpur having a hereditary salutes of 13-guns. It was the main state of the Palanpur Agency. Palanpur State became a British protectorate in 1809/17; its capital was the city of Palanpur.

Palanpur State was traversed by the main line of the Rajputana-Malwa Railway, and contained the British cantonment of Deesa. Wheat, rice and sugar-cane were the chief products. Watered by the Sabarmati river, the state was heavily forested in its northern end (the present-day Jessore Sanctuary) but undulating and open in the south and east. The country was on the whole somewhat hilly, being at the edge of the Aravalli Range. In 1940 Palanpur State had a population of 315,855.[1]

According to tradition Palanpur state was founded in 1370[2] and was ruled by the pashtun tribe of Lohani of Jhalori dynasty. 'While the earlier history of the family is who established themselves in Bihar during the twelfth century and ruled there as Sultans. Malik Khurram Khan, the founder of the Palanpur house, left Bihar and entered the service of Vishaldev of Mandore during the late fourteenth century. Appointed Governor of Songad or Jhalor, he took control of that place in the confusion that followed the death of the Mandore ruler';[3] a forebear of the family is reputed to have wed the foster-sister of the Mughal emperor Akbar and received Palanpur and surrounding areas as dowry. However, the family comes into historical prominence during the period of instability that followed the demise of Aurangzeb in the early 18th century. It was overrun soon afterwards by the Marathas; the Lohanis followed the trend of seeking recourse in the British East India Company against them and finally entered the subsidiary alliance system in 1817, along with all other neighbouring states, becoming a British protectorate. Palanpur State was dissolved in 1949.[4] 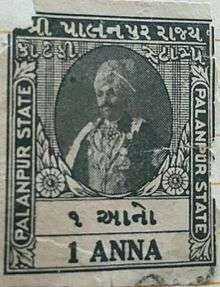 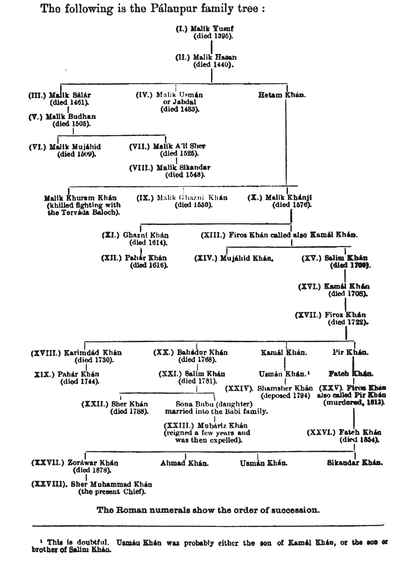 The rulers of Palanpur State belonged to the Pathan Lohani tribe of Jalori dynasty.[5]