A stadium was built on the site of a simple racecourse by the Athenian statesman Lykourgos (Lycurgus) c. 330 BC, primarily for the Panathenaic Games. It was rebuilt in marble by Herodes Atticus, an Athenian Roman senator, by 144 AD and had a capacity of 50,000 seats. After the rise of Christianity in the 4th century it was largely abandoned. The stadium was excavated in 1869 and hosted the Zappas Olympics in 1870 and 1875. After being refurbished, it hosted the opening and closing ceremonies of the first modern Olympics in 1896 and was the venue for 4 of the 9 contested sports. It was used for various purposes in the 20th century and was once again used as an Olympic venue in 2004. It is the finishing point for the annual Athens Classic Marathon.[4] It is also the last venue in Greece from where the Olympic flame handover ceremony to the host nation takes place.[7][8]

The stadium is built in what was originally a natural ravine between the two hills of Agra and Ardettos,[9] south of the Ilissos river.[10][11] It is now located in the central Athens district of Pangrati, to the east of the National Gardens and the Zappeion Exhibition Hall, to the west of the Pangrati residential district and between the twin pine-covered hills of Ardettos and Agra. Up to the 1950s, the River (now covered by, and flowing underneath, Vasileos Konstantinou Avenue) ran in front of the stadium's entrance, and the spring of Kallirrhoe, the sanctuary of Pankrates (a local hero) and the Cynosarges public gymnasium were nearby.

Originally, since the 6th century BC, a racecourse existed at the site of the stadium. It hosted the Panathenaic Games (also known as the Great Panathenaea), a religious and athletic festival celebrated every 4 years in honor of the goddess Athena. The racecourse had no formal seating and the spectators sat on the natural slopes on the side of the ravine.[12]

In the 4th century BC the Athenian statesman Lykourgos (Lycurgus) built a 850-foot (260 m) long stadium of Poros limestone.[13] Tiers of stone benches were arranged around the track. The track was 669 feet (204 m) long and 110 feet (34 m) wide.[12] In the Lives of the Ten Orators Pseudo-Plutarch writes that a certain Deinas, the owner of the property where the stadium was built was persuaded by Lykourgos to donate the land to the city and Lykourgos leveled a ravine.[14][15] IG II² 351 (dated 329 BC), records that Eudemus of Plataea gave 1000 yoke of oxen for the construction of the stadium and theater. According to Romano the "reference to the large number of oxen, indicating a vast undertaking, and the use of the word charadra have suggested the kind of building activity that would have been needed to prepare the natural valley between the two hills near the Ilissos."[15] The stadium of Lykourgos is believed to have been completed for the Panathenaic Games of 330/329 BC.[9][16][17][18][19] Donald Kyle suggests that it is possible that Lykourgos did not built but "renovated or embellished a pre-existing facility to give it monumental stature."[20] According to Richard Ernest Wycherley the stadium probably had stone seating "only for a privileged few."[16] 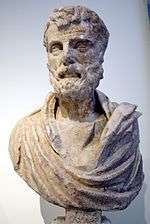 Herodes Atticus rebuilt the stadium in marble by 144 AD

Herodes Atticus, an Athenian who rose to the highest echelons of power in Rome, was responsible for numerous structures in Greece. In Athens he is best known for the reconstruction of the Panathenaic Stadium.[21][lower-alpha 2] Tobin suggests that "Herodes built the stadium soon after [his father] Atticus's death, which occurred around A.D. 138. The first Greater Panathenaia following his father's demise was 139/40, and it is probable that at that time Herodes promised the refurbishment of the stadium. According to Philostratus, it was completed four years later, which would have been in 143/4."[21] These dates (139/140-143-144 AD) are now widely cited as construction dates of the stadium of Herodes Atticus.[23][13][18] Welch writes that the stadium was completed by 143 in time for Panathenaic festival.[11]

The new stadium was built completely of ashlar masonry[24] in Pentelic marble,[12][13] using minimal concrete.[24] The stadium was built at a time of resurgence of Greek culture in the mid-2nd century. Although the stadium was a "quintessentially Greek architectural type",[11] it was "Roman in scale" with a massive capacity of 50,000,[16] which is roughly the same as that of the Stadium of Domitian in Rome.[24] Stadia of the Classical and Hellenistic periods were smaller.[24][9] According to Welch there is a possibility that criminals were executed in the stadium, however, no evidence exists.[25]

Herodes Atticus built it as "an architectural means of self-representation, and it did something analogous. The architecture of the building makes allusions to the Classical past while remaining unmistakably modern. It is Roman in scale, but it self-consciously rejects the distinguishingly Roman features of monumental facade and extensive vaulting."[24] Its cavea was decorated with owls in relief, which symbolize Athena.[24] Katherine Welch wrote in a 1998 article "Greek stadia and Roman spectacles":[26]

Though traditional in building materials and construction technique, the track included modern features that were specifically designed to accommodate Roman entertainments. [...]

It may thus be argued that the Panathenaic Stadium of Herodes Atticus, who was both Athens' leading son and a Roman consul, represents a middle ground between two conflicting cultural expectations. Its architectural for was self-consciously old-fashioned, yet in scale and function the building was thoroughly modern. Herodes Atticus built a new Panathenaic Stadium whose architecture reflected the prevailing nostalgia for Classical Greece but whose functions reflected the new realities of Roman power. While the building continued to be used chiefly for athletic competitions, its running track was also a place where during the imperial cult festival wild animals were slaughtered and hardened criminals (gladiators) fought, bled, and died.

Hellenistic festivals and bloody spectacles were banned by Roman Emperor Theodosius I in the late 4th century. The stadium was abandoned and fell into ruin. Gradually, its significance was forgotten and a field of wheat covered the site.[23] During the Latin rule of Athens, Crusader knights held feasts of arms at the stadium. A 15th century traveler saw "not only several rows of white marble benches, but also the portico at the entrance of the Stadion, which he calls the North entrance, and the Stoa round the koilon, which he calls the South entrance."[27] The derelict stadium's marbles were incorporated into other buildings. European travelers wrote of "magical rites enacted by young Athenian maidens in the ruined vaulted passage, aimed at finding a good husband."[17]

The stadium 1870, following excavations by Ziller

Following Greece's independence, archaeological excavation as early as 1836 uncovered traces of the stadium of Herodes Atticus. Further, more thorough, excavation was conducted by the German-born architect Ernst Ziller in 1869-70.[28] The Zappas Olympics, an early attempt to revive the ancient Olympic Games, were held at the stadium in 1870 and 1875. They were sponsored by the Greek benefactor Evangelis Zappas.[17] The games had an audience of 30,000 people.[29]

The Greek government, through crown prince Constantine, requested the Egypt-based Greek businessman George Averoff to sponsor the second refurbishment of the stadium prior to the 1896 Olympics.[30] Based on the findings of Ziller, a reconstruction plan was prepared by the architect Anastasios Metaxas in the mid-1890s.[4] Darling writes that "He duplicated the dimensions and design of the second-century structure, arranging the tiers of seats around the U-shaped track."[5] It was rebuilt in Pentelic marble and is "distinguished by its high degree of fidelity to the ancient monument of Herodes."[17] Averoff donated 920,000 drachmas[30] to this project.[5] As a tribute to his generosity, a statue of Averoff was constructed and unveiled on 5 April 1896 outside the stadium. It stands there to this day.[31]

The stadium held the opening and closing ceremonies of the 1896 Olympics.[32] On 6 April (25 March according to the Julian calendar then in use in Greece), the games of the First Olympiad were officially opened; it was Easter Monday for both the Western and Eastern Christian Churches and the anniversary of Greece's independence.[33] The stadium was filled with an estimated 80,000 spectators, including King George I of Greece, his wife Olga, and their sons. Most of the competing athletes were aligned on the infield, grouped by nation. After a speech by the president of the organizing committee, Crown Prince Constantine, his father officially opened the games.[34] The stadium also served as the venue for Athletics, Gymnastics, Weightlifting and Wrestling.[35]

The stadium hosted the 1906 Intercalated Games.[36] 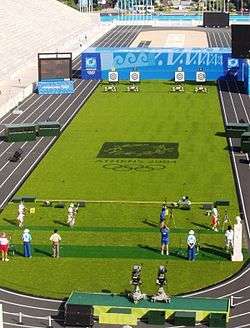 Archery matches in the stadium during the 2004 Olympics

From the mid- to late 1960s, the stadium was used by AEK Basketball Club. On 4 April 1968, the 1967–68 FIBA European Cup Winner's Cup final was hosted in the stadium where A.E.K. defeated Slavia Prague in front of around 80,000 seated spectators inside the arena and another 40,000 standing spectators. It is believed that since that game the Panathenaic Stadium holds the world record attendance for any basketball game as of 2009.[37]

Regime of the Colonels

During the Regime of the Colonels (1967–74) large annual events were held at the stadium, particularly the "Festival of the Military Virtues of the Greeks" (in late August-early September) and the "Revolution of April 21, 1967", the date of the coup that brought the right-wing regime to power. In these festivals, the stadium, "with its aura of antiquity stood as a monument to Greek rebirth, national pride, and international interest." The dictators exploited its setting to showcase their supposed popularity and propagate their new, "revolutionary" political culture.[38]

The stadium "needed no major refurbishing" prior to the 2004 Summer Olympics in Athens.[39] During the games the stadium hosted the archery competition (August 15–21) and was the finish of the Marathon for both women (August 22) and men (August 29).[40][41]

On occasions, the stadium has also been used as a venue for selected musical and dance performances.

The stadium hosted the opening ceremony of the World Athletics Championships in 1997 on a concept by composer Vangelis and along with the performance of soprano Montserrat Caballé.[42][46]

In more recent years, the stadium has been often used to honour the homecoming of victorious Greek athletes, most notably the Greek national football team after its victory at the 2004 European Football Championship (on July 5, 2004)[42] as well as winners and medalists in the recent Olympic Games.

Katherine Welch described the stadium as a "great marble flight of steps terraced into the contours of a U-shaped ravine — splendid in materials but ostentatiously simple in construction technique."[24]

The Panathenaic Stadium influenced the stadium architecture in the West in the 20th century.

The Panathenaic Stadium was selected as the main motif for a high value euro collectors' coin; the €100 Greek The Panathenaic Stadium commemorative coin, minted in 2003 to commemorate the 2004 Olympics. In the obverse of the coin, the stadium is depicted. It is shown on the obverse of all Olympic medals awarded in the 2004 Olympics, and it was also used for the following Summer Olympics in Beijing in 2008, in London in 2012 and in Rio de Janeiro in 2016.